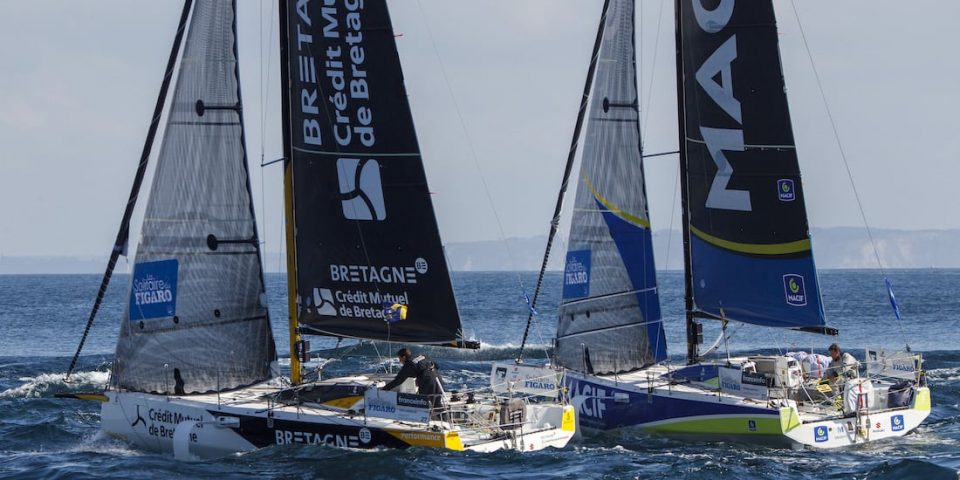 The 52nd Solitaire du Figaro finished on Thursday evening with overall victory going to Pierre Quiroga, 9th on the final stage won by Pierre Leboucher. Xavier Macaire and Tom Laperche rounded off the podium in second and third and Gaston Morvan, 7th overall, finished first rookie. Weather routing specialists Dominic Vittet, who worked in particular with Pierre Quiroga, and Christian Dumard, who worked with Xavier Macaire among others, debrief the showdown match that was the final stage and take stock of this 2021 edition.

► Let us first examine the scenario of the last stage, first thing being the TSS at Land’s End, 31 went to the east, 3 to the west, including Tom Dolan who was first at Fastnet, what are your thoughts?

Christian Dumard: The choice was not easy but there was clearly more wind in the south, which favored the 3 which passed south of the DST. But it was not necessarily easy to anticipate because the difference did not seem very important, the wind direction meant that we were rather on a fairly fast timing with the wind still quite to the left, so during the pre-start it rather favored the passage north of the DST.

Dominic Vittet: I do not agree with Christian at all, I had put a lot of weight on the fact that it was necessary to pass outside the DST for several reasons: firstly because there was more wind in the West, then because the passage of Land’s End is a risk, there is always something unexpected there, a little slack or even calm. In fact they had no light spots they always had a little wind, but a lot less than the other three in the west. The other downside to Land’s End is that it’s a long 4 mile wide corridor between the lighthouse and the TSS that forces them to not be VMG sailing at all. Finally, 3 went that way Tom (Dolan) and my two rookies, Maël Garnier and Philippe Hartz who obviously listen to me more easily than the others! I really wonder why some racers who were not far up the overall standings and had nothing to lose stuck with Land’s End.

Christian Dumard: For the rookies I worked with, the instruction was also to go west of the TSS for timing issues; on the other hand, for the better guys, it was less obvious. Xavier lost to Tom on this option, but in the end, at Fastnet, he was right behind. On the other hand, in the English Channel, I had given instructions to go downwind to the west, which Xavier did, because the others were arriving at Land’s End pushing the current, they lost a lot by staying north.

“Pierre and Xavier were the leader”

► On the section leading to the Fastnet, Xavier Macaire and Pierre Quiroga did cross the fleet to pass second and third, confirmation that they were really faster on this Solitaire?

C.D.: Yes, they were going fast, but above all, they led the race, they were the ones who decided and took the options, while behind, the others followed and only worked on positioning. At the finish line, the podium makes sense, because the third (Tom Laperche) is going super fast, but didn’t take a lot of risks.

D.V.: I agree, they were clearly the ones who dominated the race head and shoulders. Behind there was a bit of a second division, boats always well placed, but never able to take control. I think there is a problem of philosophy: I spoke about it with Pierre (Quiroga) and Alexis (Loison) who are at the center in Port-la-Forêt, where we told them a month before that the Figaro was won by staying in a fleet. I think this is silly for several reasons: first, history shows that a lpt of racers won because they were able to step away and do their thing at times – this is the case with Yoann Richomme recently [“And Armel Le Cléac’h last year”, adds Christian Dumard] – and I think that this strategy which consists of following each other is neither interesting nor productive. This is the example of Tom (Laperche): he sails well, is always in the right place, he has the right speed, but he never takes the risk. What Xavier did on the first stage, Pierre on the second, then at the end of the third. To win the Solitaire, you need to know how when to step out and take the risk.

► The end of the stage saw different options, with Xavier Macaire’s group closer to the coast than that of Pierre Quiroga and Tom Laperche, did Pierre get spooked?

D.V.: Half joking with him before the start I summed up by saying: “You take the lead at Fastnet and after, you mark Xavier.” He finally passed the light third not very far behind Xavier, but from the Fastnet he lost him and never saw him again, neither on AIS nor in person! Towards the end of the stage, we had said to ourselves that it was better to stay offshore because with the thermal, there was a risk of light pressure when approaching land. Finally, this drop in pressure which we still saw yesterday on some files, never got to where Xavier’s group went, they never stopped, that was a big surprise. Yesterday afternoon, when Pierre found out he was 8-10 miles behind the leader, yes he scared himself a bit, but he didn’t panic and did something pretty funny: he switched off the VHF, telling himself that he no longer wanted to hear about finish times or deltas or whatever difference, to concentrate completely on his speed, with the objective of getting away from Tom Laperche. It was good for him to have such a sparring partner to keep him pressing and pressing.

► Conversely, did Xavier believe at one point in the final victory? And what was the instruction at the start of the stage?

C.D.: The instructions were really to do his race as he knew how to do, without taking ill-considered risks, he knew that two hours of separation he needed was a lot. In the end, we had clearly chosen not to be very far from the coast, I would have preferred it to pass even closer to Belle-Ile. When he crossed the line, he knew it wasn’t his.

“This course rewards the best”

► The revelation of this Solitaire is Gaston Morvan, 7th overall and first rookie, is that a surprise for you?

D.V.: I didn’t expect to see him there, but I found him to be incredibly pugnacious, he always stayed in the game close to the front. On the last leg he was a bit out of it for a while he still managed to come back, I hope for him that he will go on to achieve what his father (Gildas) never managed to do, that would be a great story.

C.D.: He had a great race, always coming back and never letting go until the end. I think he worked hard for his Solitaire. On the last stage, I really liked Francesca Clapcich, with whom I work, she finished 16th hanging on to the group, she made really good progress, it’s not easy when you come from the United States like she does. She is hard-working and tough, if she returns to Figaro, she can do great things.

► Who are your other favorites of this Solitaire?

C.D.: I think Erwan Le Draoulec, who is very young, has progressed well throughout the Solitaire, he is 8th on the last stage (and 10th overall), he also has great potential.

D.V.: I really liked Elodie Bonafous. This Figaro has been long, we have accumulated tiredness over each stages over time, some have struggled to stay sharp in particular Achille (Nebout) who did two great first stages and collapsed a bit on the last two, Elodie pleased by her ability to hang on to the best. 12th overall, that’s a great result for her.

► Where did this long Solitaire inspire you?

D.V.: The sailors had a hard time, it was hard, and it shows that you really have to start super rested. This was one of the strengths of Pierre, who was away from the boats for a month before the Solitaire, which allowed him to arrive full of energy. At the same time, they loved the freedom given to them by Francis (Le Goff, the race director) with very few course marks. We got the spirit of Solitaire back to the way it was in the first 30 years.

C.D.: I agree with Dominic, having open courses is what allows the best to express themselves, especially as the boat lends itself well to this type of course. The timings are much more complicated to predict than in the Figaro 2, it adds spice, it speaks to the experience of the riders and requires them to have worked well upstream to adapt to these changes in scenario. In the end, it rewards the best.