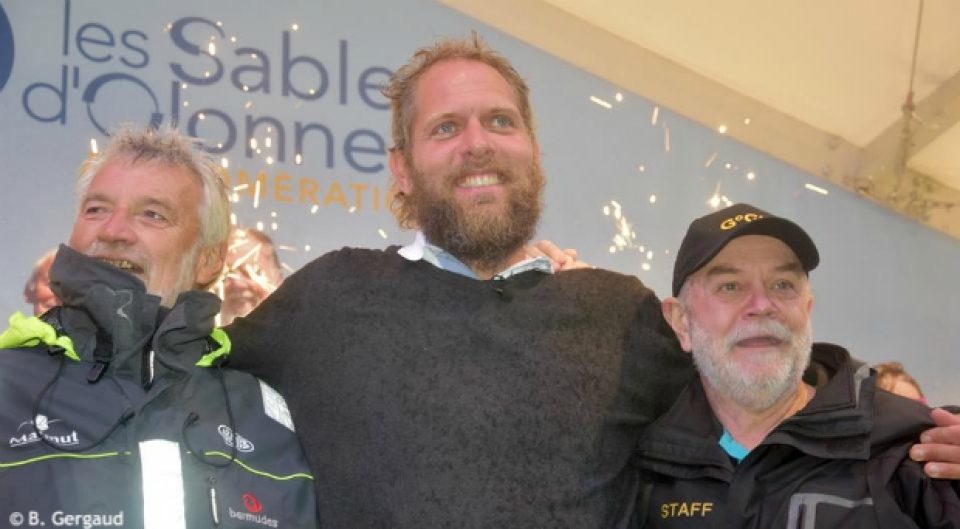 Don McIntyre : “The next Golden Globe winner might be 21 or younger”

Don McIntyre is the founder, chairman and CEO of the Golden Globe Race. The charismatic, outspoken Australian adventurer and circumnavigator has realised many of his dreams over the course of his career. When he set out to replicate and honour the original Sunday Times Golden Globe Race 50 years after Sir Robin Knox Johnston became the first sailor to complete a solo non stop circumnavigation, he achieved a groundswell of support. But even then not even he would have dreamed of the popularity and success of the race reflected by 73 year old veteran Jean Luc Van Den Heede’s win on Monday. The race has been the subject of considerable scrutiny due to the high rate of attrition. After VDH finished only five of the original 18 skippers remain on the race course. Tip & Shaft spoke with McIntyre after the VDH victory.

The VDH finish was reminiscent of a big Vendée Globe finish, how did that compare to your original vision of the race?
It was twice what we could have ever dreamed of, thousands and thousands of people out and hundreds of boats out  It all went like a dream and Jean-Luc, what a great ambassador he is and an incredible achievement.

Has it exceeded your own original vision?
I have to say so yes. The original reason the race was started was because I wanted to sail in it. Back then people would say ‘but the boats will just sail over the horizon and never be seen again. But the reality is different with the mix of daily tweets, the soundcloud phone calls and the tracker, and it all just stayed alive all the time. So many people have told me that our event is more alive, more real because people can dream. I always said it had to be a very human race.

What about the number of abandons, the attrition rate? It is high.
That was a surprise to many. I have to concede there are less finishers than what I even thought. I expected around half to finish. There are lessons to be learned. I don’t want to hide behind the words bad luck but some of the rigs were built by the best in the world and they knew what they were building for and they lost them. We had well prepared boats, top sailors and they came unstuck but I think it will be a different story in 2022. Everyone who is entering for 2022 has already learned a lot.

What do you see as some of the reasons?
It is about planning, preparation and execution. We lost eight sailors going down the Atlantic and some of them can be about one simple wrong decision that knocks you out the race. Planning is key, you need to sit down and look at everything that you have had before and the experience of others, pick the right equipment and set your boat up the right way. The critical element, as an organiser, is risk minimisation and mitigation. That is where the Notice of Race comes in and we are really strict in saying what goes on. This event will never have everyone finishing. We had some people suggesting that some of the entrants who entered the GGR were not ready to go, they should not have been allowed to start. And I came back and said that is not what the GGR is. Primarily it is an adventure.

So what have you changed for 2022 in terms of trying to ensure more boats finish?
This time (for 2022) we have added to the mileage qualification. It was set at 1000 miles and we will up that 2000 and it must be in the boat you intend to race in the GGR.  The other thing is for us to make more recommendations. And if there are particular items of commercially available equipment are known or proven to have safety ramifications we will investigate and we may then say that item will not be allowed unless it can be proven that the issue has been addressed.

What is the optimum fleet size?
We like the idea of 20 boats, that is a nice group to follow. We hope to get 30 people at the start.At the moment we have two classes for 2022, the Suhali class which is the current group of boats, there are 20 entries there, we have five special invitations and then we will have up to ten of the Joshua class which I’d be happy to get five but it is looking like we might get three or four. I am very confident we will have a wait list. We have entries coming in now and over the last four weeks. Four other people have just bought boats and have not entered yet. So we will be oversubscribed sooner rather than later I think.

What about the lack of support and some might say criticism, even, from the FFV?
A certain French sailing organisation suggested the Golden Globe Race was full of old men and dreamers. And how correct they were. We have done everything we can to make this event as safe as we possibly can. If there was no risk no one would want to enter the race. And secondly we have had absolutely zero criticism at all from any maritime organisation anywhere in the world, as of today. The French maritime authorities, before the start of the race at one particular meeting said that our Notice of Race was the best Notice of Race for any sailing event they have seen in France.

Would you go back and seek their endorsement in the future, or that of World Sailing?
No, we believe this event has found its place in terms of sailing. In the beginning when we were talking to the FFV it was my intention to then make an approach to World Sailing on the basis that World Sailing should be inclusive, rather than exclusive, and that there is no category that allows us to operate under Category 0, we are not going to take two sets of underwater breathing apparatus, we are not going to take 1.2 tonnes of fresh water at the start. We cannot physically meet Category O. So we put in everything in from Category O which suits a safe 36 foot ocean going yacht.

How have the finances of the event worked out, what is the budget?
When I went and lived in Antarctica for a year it cost me 800,000 dollars and running this race has probably cost us half of everything we own. Les Sables d’Olonne agglomeration has been fantastic, beyond belief. We had an agreement before the start and they got a quite substantial group of partners coming to assist them and they assisted us. They have probably picked up half the budget to produce or carry out what we did. We raised about €35,000 in cash sponsorship, that is all. The rest Jane and I put in. And now of course we are hoping the event is a success and for 2022 we can now secure some proper backing. If we leave out the input from the agglomeration our total budget for running the race is going to run at about €600 000 in total, maybe a little bit less.

What are your thoughts on the performances of Jean Luc Van Den Heede and Mark Slats?
Incredible. We could not have asked for a better finish. Mark Slats is an incredible adventurer. Having him come up behind Jean Luc was amazing. Jean Luc and I have been friends for 32 years. Finally after the finish I got to sit down with him and Robin (Sir Robin Knox Johnston) and talked to them for about an hour. I have nothing but respect for him.

And clearly age is no barrier to success. But do you have any concerns now you will attract many more older sailors?
I have always said it does not matter what age you are, young or old. Health is everything. Jean Luc is still strong. Entries that are coming in right now are across the board. We won’t knock someone back purely because of their age. People apply for an invitation. And that gives us the right to say ‘thanks but no thanks’ if something does not look right for us. Our notice of race is pretty comprehensive and sailors need to do a lot of training, and have the right equipment. And if they are not up to it we have a drop out before the start line.

So the future looks bright for the GGR?
We have always said we are trying to recreate history. It would be fantastic if this went on forever and I think it will. It is down to the people and I can’t imagine people getting bored with the GGR. It is not about a group of boats neck and neck with the same routing programs, the same boats more or less, going hell for leather with heavy water crashing over the boat all the time. This is about a real person doing an incredibly long hard voyage around the world and that keeps everyone engaged. I hope we get more women next time. Susie Goodall was great and we missed her and she will be back I am sure.