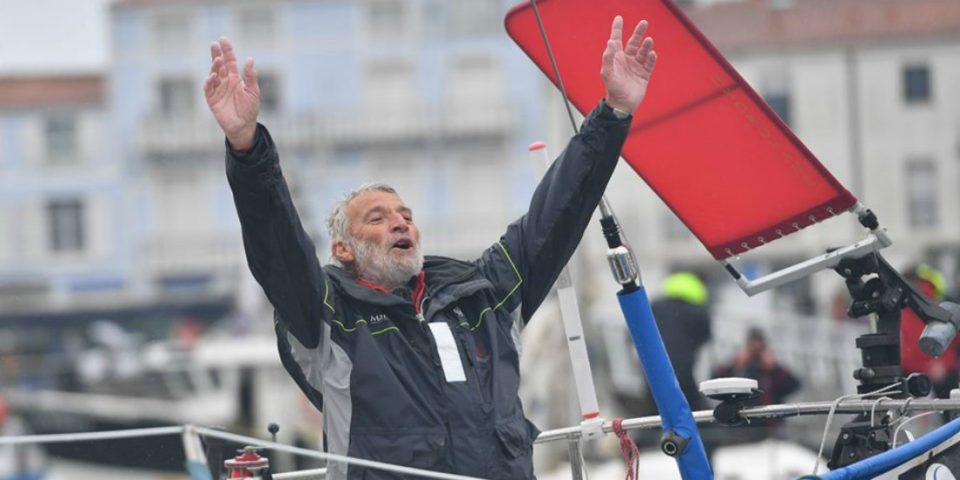 Just over ten months after Jean-Luc Van den Heede triumphantly won the race after 211 days of sailing, he was at the Nautic in Paris last Wednesday alongside Yannick Moreau, the Mayor of Les Sables d’Olonne and President of the district and Don McIntyre, the founder and organiser of the race, for a press conference for the second edition of the Golden Globe Race. At the end of the conference, the pair renewed their partnership for the second Golden Globe Race, which is due to start on 4th September 2022.

For those in charge in Les Sables, this extension seemed quite natural: “Taking into account the media and economic feedback, and the fact that it was a popular success, there was no hesitation and it all seemed natural,” confirmed Nathalie Bohain, in charge of local development projects and European funds. What was the feedback? They were detailed in a study ordered from the Meltwater team: the value of the media feedback is estimated to be around 166 million Euros between 1st January 2016 and 30th May 2019, including 16 million just for the town of Les Sables d’Olonne. Nathalie Bohain explains: “With the overall brand of the Golden Globe Race, we are indeed at 16 million Euros, but if we look more precisely at the brand, Les Sables d’Olonne, we are at 4 million Euros of value in France and abroad. As this was the first edition, this is a very good outcome.”

The town will have welcomed 110,000 people between the start and finish with some huge economic consequences, even if this was not analysed in any particular study. “All of the hotels were full on the weekend of the start, which was not the case during the previous year during the same period, and during the weekend when the Village opened, 80% of the hotels were fully booked, while there were rooms available everywhere in 2017,” explained Nathalie Bohain.

The results also benefited the skippers’ partners, in particular for the Matmut, Jean-Luc Van den Heede’s headline partner. Interviewed by Tip & Shaft, André Geffard, the vice-president, confirmed: “We were alongside Fabrice Amedeo in the Vendée Globe, but there was nothing in common with that. We have been generously rewarded with a lot of media feedback, some exceptional coverage in the world of sailing and beyond.” The Matmut, which will continue to support VDH in 2020 in a series of races in the Atlantic (Spi Ouest-France, Tour de Ré…), was not able to give us any precise figures about the feedback, nor about the budget they dedicated to this adventure, but it is thought that the average budget before the start was somewhere between 150,000 and 300,000 Euros.

This success led Don McIntyre to aim higher in the second edition, where the budget will be much bigger, going “from 2.4 million Euros in the first to 4.8-5 million if we are successful,” stated the Australian, before adding, “We are now looking for a title partner for around 2.2 million Euros and there are four supporting sponsors at around 150,000 Euros, then technical partners for much less. Doors are easier to open these days. The Golden Globe Race as a brand is strong. If we had a title sponsor they would have been happy too!”

The increase in the budget is confirmed by Nathalie Bohain and will come partially from the town and the regional agglomeration as per a vote on July 5 from which the agglomeration undertakes to pay 350,000 euros (excl. tax) to the organisers and the town 100,000 euros (versus 150,000 for the agglomeration in 2018). This will in particular allow for more media coverage of the race, the weak link in the first edition, as Don McIntyre recognizes: “Partly the lack of images was because the entrants themselves were not interested in taking them. They were absorbed in their own challenge. I could not believe it in Lanzarote at the first film drop. We got virtually nothing. I was shocked. But it was all new to them, so we understood and respected that. A few did really well.  So yes that was a problem. We also had a small management team on a tight budget to get videos edited and out. That was frustrating. There will be huge change in this area for 2022. All boats will have full digital video suites, some with drones and of course celluloid film cameras as well. We will have a dedicated video team following and producing immediate VNR’s. To back that up, it is now compulsory under the Notice of Race.”

To date there are 26 registered in the Suhaili class at a little less than 1000 days before departure, the limit being 28 in, while there are seven in the new Joshua class, where the ais is to rekindle the spirit of the odyssey of Bernard Moitessier on a one design replica of his boat. The first boat will be presented before the start of the next Vendée Globe.

Building on the success of the Golden Globe Race, Don McIntyre also decided to continue in this “vintage” vein by launching the Ocean Globe Race, a round-the-world race with crew with stops that will revive the original spirit of the Whitbread. “I planned the OGR in 2014 at the same time as the GGR but I said lets wait to see if the GGR is a success then we go. That is the case and WOW! Even I admit I got it right. Now all we have done is issue three press releases. In five months we now have 18 of the available 24 places in the Retro classes filled and for the new Classic Challenge we have three Whitbread 60 reservations two weeks after announcing it. Entries do not open till 1st January 2020.  Assuming these boats all make the start, Ocean Globe Race is now the biggest fully crewed  RTWR in the last 30 years.”