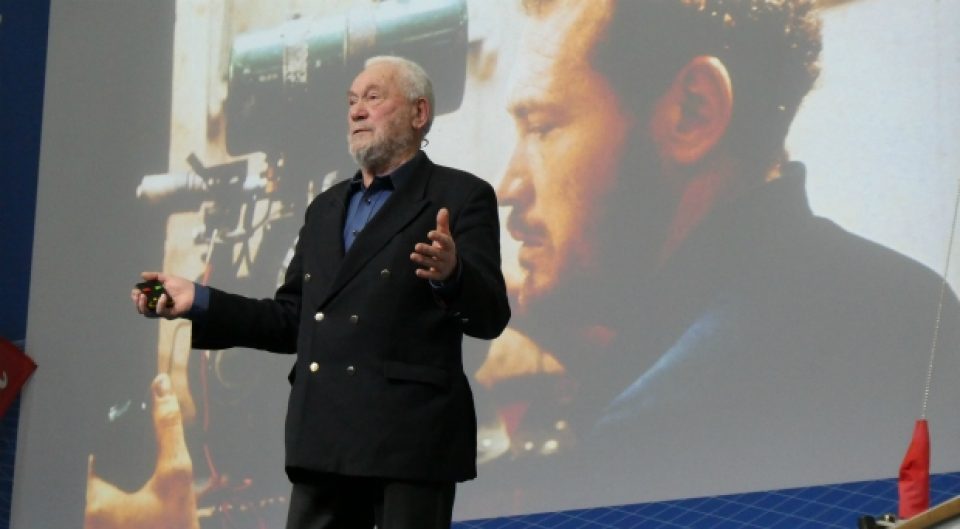 Fifty years after winning the Sunday Times Golden Globe Trophy race, becoming the first person to sail solo non stop around the world when he finished into Falmouth on April 22nd 1969 after 312 days at sea, Sir Robin Knox Johnston looks at the ‘new’ Golden Globe Race which is about to finish in to Les Sables d’Olonne. The Clipper Ventures company of which he is executive Chairman and Co-Founder is now a multimillion pound publicly listed business with four main divisions, the Clipper Round The World Race, Clipper China, Clipper Events and Clipper Telemed. The 12th edition of the Clipper Round The World Race will run in 2019-20. To do the full circumnavigation costs around £50,000. In total around 700 individuals will participate in the race which once again is heading for a sell-out. The indefatigable Knox-Johnston will be 80 in March and was just back from Boot in Dusseldorf where he was helping sell the Clipper Race to Germany’s potential sailing circumnavigators.

What are your thoughts on this Golden Globe Race and the rate of attrition, are the boats used up the task?
The race itself has been fascinating. There have been five dismastings. I am trying to work out the common cause is. I have not answers back from all of them yet so I am not going to comment further, but I am beginning to think I may have found something. I need to hear back from two more before I am certain. I think there is a common factor but I am not going to say anything until I am sure. The boats are fine. It is down to how you handle them. They have been getting rolled and dismasted and that is down to the handling and how they are being sailed. The rate of attrition is better than the first one, isn’t it? There are five left out of 17, on the previous race there was one left out of nine.

And the performance of Jean-Luc Van den Heede, expected to win?
I always fancied him to win. I expect nothing less from him. He has the experience of six solo circumnavigations and so is very, very professional when it comes to these kind of things. He is very determined and very competitive and that is showing.

What do you feel about him taking over your honour?
He will overtake me as the oldest person to have done a solo round the world race [Jean-Luc Van den Heede, 73, ed], I was 68, but I am about to hand over the baton to him and if I am going to have to do that then it might as well be to someone I know and I like. There are no barriers in terms of age. I remember when I went off to do the Velux 5 Oceans Race when I was 68, I remember there was a girl presenter from the BBC who said ‘Isn’t it a bit dangerous you might die?’, but you might die crossing the road, it is a ridiculous attitude. They think once you are over 50 life is over and you have gone, but you haven’t. We are all still active.

How is the Clipper Race 2019-2020 shaping up?
We are refitting boats at the moment and already there are two legs which are fully booked up and others are rapidly booking up. I think we will have a full event. People want to get away and do something special with their lives. Everyone can sit in front of the TV but most people have more in them than just wanting to do that. People want to be able to say that they have done something special during their lives.

If anything more and more people want to race around the world as a means of escaping from the ‘always connected’ lifestyle?
I think that is right. People want more adventure now. I think 100 years ago, say, life was more of an adventure in itself. Now we know so much about the world and life then people yearn to do more and have adventures and you can’t have more of an adventure than racing around the world. There is no such thing as a typical Clipper racer, they are 18 to over 70, there is nothing typical about the people who want to do it. Over 40 per cent are female. Over 50 per cent now are not British. There is nothing typical at all except a willingness to go out there and do something with your life.

Any significant changes? It is a pretty settled, successful formula?
The route will be very slightly different with a couple of ports dropping out and coming in. Otherwise will be very similar to previous ones. It evolves every race. We look at changes every race but usually they are only minor tweaks. 40 per cent of the people who do the race will never have been on a boat before and at the end of the race you have some very good sailors indeed. Our four weeks training is designed to make them safe but they have still a lot to learn.

And women skippers have enjoyed considerable success recently?
We had two women skippers and they finished first and second. They were both brilliant skippers. We have had five over the course of the race in total and someone asked me recently why we don’t have more and I said: ‘find them, we’ll have them.’ We have a very good experience with female skippers on this race. The proportion of men to women is about the same as normal there is no obvious increase. You don’t know if there is any increase (because of the success of women skippers). We are going through an era of change where women are challenging the old stereotypes, it has happened in football and rugby and in sailing and I think we will see more and more women come out and do races like ours.

The Clipper Race has outgrown its British roots as part of a business strategy?
The  Brits were under 50 per cent on the last race and that is policy on our part. You have to persuade people to do the race and we felt from a business point of view that we would be safer not to be totally dependent on the British market.

The race brings talented skippers to the fore but we are not seeing so many come through into solo offshore racing now?
Alex Thomson is an outstanding example. I see more sailors like him coming through but the big problem is getting sponsorship. Fifty years ago every major newspaper had a sailing correspondent and none do now. The BBC does not have any programmes about boating at all now. No company is going to put money into a project, especially when it might be millions, when they cannot get the return on it. In France the media are right on to it and that is where they get the return from and it all works.

What is your view of the scene in France?
It is fantastic. They have some brilliant sailors but it all works, it all helps when they can get sponsorship. It is a national sport which is loved. And here, as I was told again by a researcher at the BBC recently, it is still seen as elitist. With 2.8 million boats owned in the UK it can’t be elitist.

And the moves into China are the start of a major new initiative?
The Chinese are starting to support sailing in a big way, like we would never see the British government do. It is happening now. We are planning on setting up schools in China, we have been asked by the Chinese Yachting Association to do that. We have bought a sailing school in Hamble to train up Chinese sailing instructors. Who knows how many schools there might be in the future but at the moment we are just looking to get enough instructors trained up to get one school going then it is all scalable. We have the model. We will shortly start bringing them to the Hamble Sailing School fairly shortly to train them up to get the Yachtmaster Offshore and then their teaching qualification. Once the instructors are trained we will start the schools in China

What about the Volvo Race becoming The Ocean Race and moving to IMOCA 60s?
In 1992 when I was running the BOC Challenge I went to the Whitbread Race as it was then and said, ‘look, rather than trying to constantly invent a new class of boat, let’s get together and turn the Open 60 into a boat which can be used for both the Whitbread the BOC’. The people who started the Vendée Globe were with me. The only reason it was turned down was because the secretary of the Whitbread Race at the time said he did not like plumb (vertical) bows. Now it has taken 25 years for it to come round and so I strongly support the move and it is high time. It is great idea. It is a win win situation.

What would be your advice to a 20 year old you?
I was in the merchant navy when I started. I still say there is a lot to be said for getting a professional qualification. I am still qualified to command the Queen Mary, I am not suggesting you should let me do that but I still have the qualification. The grounding has been invaluable to me. I learned specific skills which got me round the world. But that world has changed so much, we used to get five months leave after two and a half years, nowadays it is 30 days on 30 days off (in the merchant navy).

Would you recommend taking the French route into solo ocean racing?
Now it seems like the only way to get in to it is to go to France and get into someone’s team as a maintenance person and then work your way in as crew, build it yourself up. It is really hard in this country when the only team is really Alex Thomson’s.

Fifty years ago you raced solo and we heard nothing about you for weeks at a time. Now we are looking to ocean racing as a sporting reality show when we will soon be able to tune in an join crews live 24/7 as they race round the world?
We have to live with what the sponsor wants, that is the game you have to play. If you don’t want to do it then you won’t get that sponsorship.