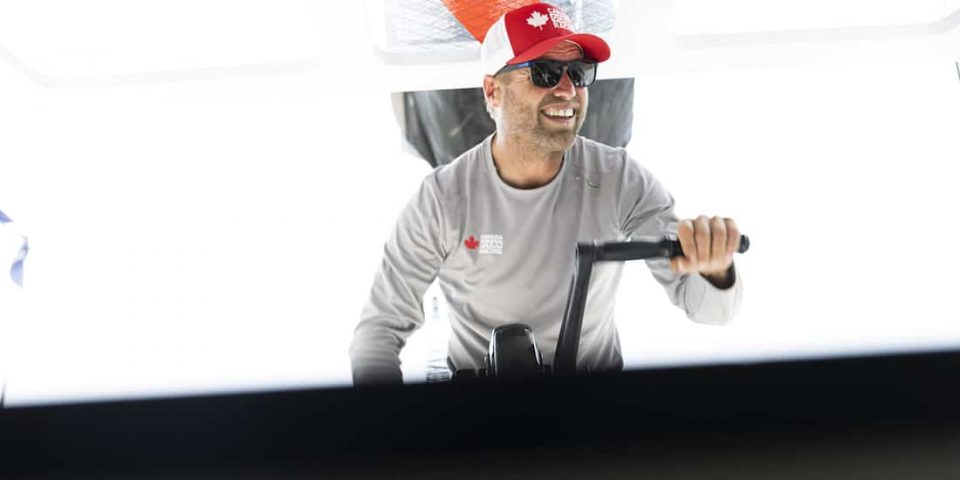 Alex Thomson: “I would definitely like to do another competitive Vendée campaign”

On Wednesday Canadian businessman Scott Shawyer announced the launch of Canada Ocean Racing an initiative intended to take him to the Vendée Globe 2028. It is a long term a project which will be a collaboration with Alex Thomson Racing across all the facets of the business. And it was an overdue opportunity for Tip & Shaft to catch up with Thomson who is obviously not finished with the Vendée Globe.
► What was the genesis of this project Alex, where did it all start?
It was when Scott was locked down in Canada. He knew about the race before – he is an A Class catamaran sailor, he has a cruising catamaran, he is a lifetime sailor, he knew about the Vendée Globe and Gerry Roufs, but he had never followed it like everyone ended up doing so last time. He was completely inspired by the race, the stories of resilience and so on. And he told me all about Kevin Escoffier’s rescue story. He could not understand why more Canadians did not know about it. He is a successful businessman in his own right. He saw how big it is in France, and people outside of France still don’t understand how big is the Vendée Globe, and then he touched base with us. And he could see how it all works in other markets – for Koji (Kojiro Shiraishi) in Japan, in Germany with Boris (Herrmann) and us. He thought ‘why can’t I do this?’ He wants to be the first Canadian person to complete the race. Overall he wants to build up the skills levels in Canada.

► Who spoke to who first?
He came to us one year ago. As an international team we get a lot of people come to us with the idea, the dream to do the Vendée Globe but really don’t realise what it takes. Most are put off really by the schedule and what you have to achieve before you get to the start line. I gave him a realistic idea of the amount of sailing he will need to do if he wanted me to take on this project and work with him. He was not phased. But the exciting bit that gets me is the opportunity to break into a new market, to go to a new country where 30 per cent already speak French, that is an advantage, Canada already has an ocean race Quebec Saint Malo which starts there. I have been to Canada twice in the last 15 years with our programme, in 2019 with the last Hugo Boss, I can see what people feel about it straight away. I can see that fans travelled from half way across Canada to see the boat and meet the team. And so I think that is the big motivation for us is to be able to create an audience and help build a sustainable business model in Canada.

► Do yo have a boat?
We have the boat since February– which was Offshore Team Germany’s one (Owen-Clark ex Acciona launched in 2011, meanwhile the German team are integrated with Benjamin Dutreux’s team). It is is a difficult market for IMOCAs and so it was great to get a boat of this generation which had been through a massive refit and put back together. It will be touring Canada – Toronto, Montréal, Quebec – in September and October with the idea to introduce the project to as many people as possible, to build an audience, to get people excited and to start the process of showing the value and getting some commercial support.

“Then we can grow that to
a winning campaign for 2032”

► What is the funding situation and future plan for financing this?
He has financial ability to do it himself. But that is not the aim. At the end of the day this is not about a one hit wonder, this is to produce something which is longer lasting. And Scott’s approach to it is to become a professional sailor. That is what is he doing. There are some bits of his knowledge which are already good, he is good on Adrena, almost as good as me, for example! We have to start with what value we can create in Canada and what is that value worth. And so today it would be hard to sell a project at top level. But there is where we want to get to. But we will start small and in the next couple of years build a business which can stand on its own two feet. The one thing working with a team like us is we won’t cut corners. We are looking at upgrading the boay with foils, we are looking at options with the boat but for now we need to figure out where does the commercial return versus the value sit and that gives us the size of the campaign and then we can grow that to a winning campaign for 2032.

► And what is the training programme?
To build the experience we want him to have will take a long time. I would like him to be doing 30-40,000 miles a year as a minimum. Over six years that is a lot of miles. And the qualification process is strict and this race could well be oversubscribed and so too in the future. It is important to hit the 2024 race qualification so that you are not training after that just building more miles. Our first Transatlantic will be the RORC Transatlantic and then we will do the Transat Jacques Vabre at the end of next year.

► Will you do the TJV next year with him?
I will ask ‘the missus’ next year. For me it is never about the desire to want to go and do it. I have responsibilities at home that are more important to me than winning a yacht race. The programme starts where we start but the world is our oyster. The plan will be to be building a boat for 2032 and building a programme which ultimately is competitive and up there with the best.

► What are your own ambitions?
Who knows…. who knows? 2028? Let’s see. What is good is that there are lots of good reasons for this for us as a team. We get to start afresh with someone new. We get to work on a strategy, the planning and use all our know how. This is a nice place to start from zero. There are always sponsors out there. We get to start afresh but personally it keeps me in the game, keeps us in the know, keeps us up with what is going on. If I decide to make an attempt for 2028 then you cannot be going from zero up to hero again.

► How much of your time will this take up?
It will probably be 50 per cent of our business so far. It is such a great game to be in but having sold the boat and having no sponsorship contracts or responsibilities, it feels very different. You don’t realise the level of stress you are under, and the level of responsibility for people and so on – I don’t say that from a negative point of view. I loved it. I loved that level of stress. But it is nice to be able to get a level of perspective. And it is nice to see from the sidelines, watching new boats going in the water, new teams, great to see Jérémie working with Franck, great to see Boris get his boat in the water so early.

► Have you missed the IMOCA racing?
Yes definitely. I am still doing some racing here and there, but nothing like the Vendée Globewhere before the start you are nearly throwing up in a bin. Being at home has been great, working with the kids and their schools and their friends.

► Is your desire to win the Vendée Globe is as bright as ever?
Yes. Definitely. I would definitely like to do another competitive Vendée campaign and up the ante for sure. Whether it would be me or not, I don’t know. But there is a desire to carry on and perhaps do something outside of France and get a bigger audience, send out the story and put a competitive entry together.

► If you were to select a boat now which one would it be and where would you go for a designer were you to get a stack of money and build new?
Today it would be Apivia, it is the most developed the most advanced. But for me the development, the work we have done and the relationship we have with VPLP I would trust. The designers all have similar tools. What is important is how you work with them, the processes you put in place to try and capture everything you need. We did a lot of work with VPLP including on the sail back from Cape Town. I think it would be foolish of us to step away from that knowledge and relationship.