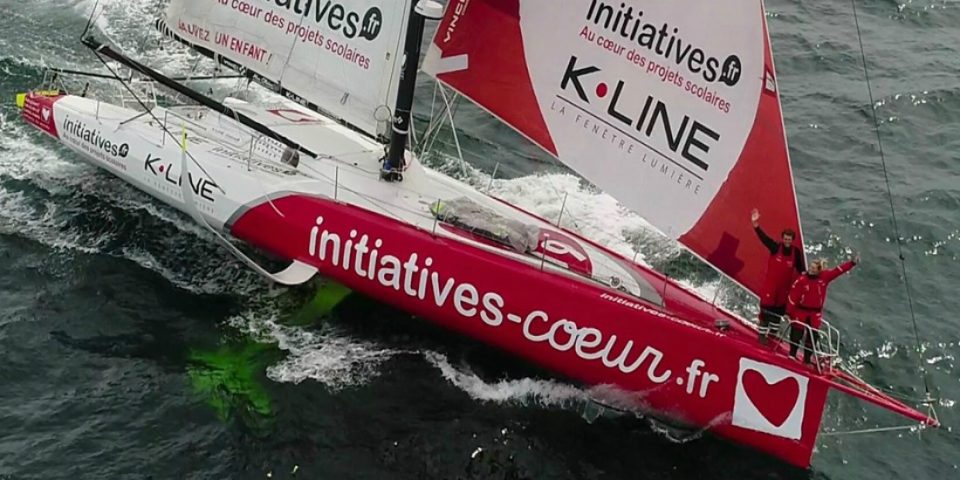 Imoca: It’s all about the foils

At the start of the last Vendée Globe in 2016 there were seven of the 29 IMOCAs with foils. In last year’s 2018 Route du Rhum Destination Guadeloupe half of the IMOCAs which raced had foils. And in the upcoming 2019 Transat Jacques Vabre more than two thirds of the fleet will have foils. In less than four years foils have become the rule rather than the exception. But they are still very much in the early stages of development. Less than one week before the start of the Bermudes 1000 Race, the first of the 2019 IMOCA season, we review tips and shafts, by Tip & Shaft.

Generations 1 and 2: The early days
In terms of IMOCA foils the most experienced designers are unquestionably VPLP and Guillaume Verdier. After working on the basics of the concept together, since the last America’s Cup they have been working independently of each other. On the Cup VPLP worked with Artemis while Verdier won with Emirates Team New Zealand. “For generation 1, we were trying to lift the boats knowing that we would be penalized at certain speeds,” explains Vincent Lauriot-Prévost. The goal of the generation 2 that immediately followed [such as those which were on the winner of the 2016 Vendée Globe, Ed], was to limit the loss, especially upwind.

Dubbed “Dali” this S shaped generation, like mustaches, follow the same themes but with different small variations. These are either on the original foil assisted boats from VPLP / Verdiers or those which subsequently have had foils added, Prysmian Group Giancarlo Pedote (formerly UCAR-StMichel), Maître Coq Yannick Bestaven (formerly Safran II), Louis Burton Bureau Vallée (formerly Banque Populaire VIII) – Burton announced the construction of a new pair of foils next winter -, Newrest Arts & Fenêtres by Fabrice Amedeo (formerly No Way Back), Malizia II-Monaco Yacht Club of Boris Herrmann (formerly Edmond de Rothschild). As for the current VPLP/Verdier Hugo Boss went furthest in terms of the surface area of the foils with a more stretched out shape, two years later Alex Thomson showed his overwhelming superiority downwind in the Route du Rhum.

Among this second generation is Sam Davies’ Initiatives Coeur which of course was previously Maître Coq of Jérémie Beyou (ex- Banque Populaire VII, ex-Foncia). It dates back to 2010 but during the winter of 2015-2016, prior to Beyou’s Vendée Globe, benefited from the addition of foils designed by the New Zealander Nick Holroyd (variously with Emirates Team New Zealand, Softbank Japan Team and now at Ineos Team UK). After the solo round the world race, Initiatives Coeur added rake controls for 2018 and then this winter fitting brand new foils (see below).

Charal and Hugo Boss: from generation 3 to generation 4
Summer 2018 launched Charal‘s foils are for the “the first boat designed around its foils,” says Vincent Lauriot-Prévost. The hull shape is much more influenced by the effective reduction in drag and the cant of the keel (which adversely affects the action of the foils) has been reduced. Launched at the end of the summer Charal has proved very potent with its huge bent foils that are angled to the tip, which allow the boat to lift for longer, sustained periods and to accelerate hard. Too strong? “It is a long learning curve,” admits Pierre-François Dargnies, the technical director of the Charal team. “But we have made about thirty successful passages since the Route du Rhum and the boat will race the Transat Jacques Vabre with this pair of foils. For the Vendée Globe, we are already preparing our V2.”

The new foils for Initiatives Coeur
VPLP promise…”The foils of the new Hugo Boss will look like nothing we have already seen” … so, logically, nothing like those which have just been revealed last week on Initiatives Coeur. Still, the new, huge lifting planes, designed by Guillaume Verdier for Sam Davies’ IMOCA are also very typical lengthening the key horizontal plane with a very tapered tip – which appears almost flexible at its end –  there is negligible anti-drift action. “This generation has been designed to be more stable, to work earlier and to lift more at slower angles. But the performance potential is  huge, there are even VPP values ​​you just do not want to believe!” explains David Sineau, the project manager. Initiatives Coeur’s foils are almost as wide as its outriggers and the slim tapering tips make it very complicated to dock… and they will likely be hard to clear when sailing.

The extra mass (that is the aperture structure and mechanicals) is reckoned to be more than twice the weight of the foils themselves (a 2016 generation foil weighs between 150 and 200 kg) “There is more weight also added because of the repair of the hull because of the delaminated area during the Route du Rhum and because the foils change the attitude of the boat so consequently brings the slamming areas aft,” explains Sineau. The cost of this ‘initiative’? No comment, but along with the new mast that will be fitted next year, according to the team manager of Initiatives Coeur all developments of the boat since 2018 will cost 1 million euros.

What about other architects?
Charlie Dalin and Thomas Ruyant both commissioned Guillaume Verdier for their IMOCA. Sébastien Simon chose Juan Kouyoumdjian, who also works for Nicolas Troussel’s Corum). Simon notably has the support of Vincent Riou, who had already had Juan K, the French-Argentinian draw PRB’s foils for the Route du Rhum. “The experience gained on PRB and the feedback from Vincent allowed us to really refine and back up our simulation tools”, explains Juan K. “But the problem with foils is that we have to integrate the deformation of the structure under the increased loads  otherwise the simulations themselves are worthless.”

Designer Sam Manuard, is working on his first IMOCA for Armel Tripon and so is starting from scratch. He relies on KND SailingPerformance for modeling and simulation. They have worked on the Volvo Ocean Race, the America’s Cup and with the TP52s. Manuard is obviously tight lipped on the direction they are taking with their foils: “One thing is certain, the foils will not be small and they will be orientated more towards all round versatility because the Vendée Globe is not just about speed downwind in breeze.”

Retro-fits
Last year, Arnaud Boissières and Alan Roura lined up on the Route du Rhum aboard 2007 generation IMOCAs equipped with foils. On La Mie Câline, the foils built at Mer Agitée came out of the moulds for Maître Coq‘s foils for Jérémie Beyou in 2016, but adapted to the specifics of the completely reworked Owen-Clarke design which was previously Ecover 3 and Gamesa.

On Roura’s La Fabrique, designers Finot-Conq chose an original geometry: in the form of a comma, the foils move almost vertically on a small radius of curvature. So the tip is almost horizontal in the up position and it straightens down the foil. Really their results during the Route du Rhum, were not conclusive in terms of the effectiveness of the retro fit formula on these heavier boats. The two skippers retain this configuration this season and for the Vendée Globe.

Isabelle Joschke has used her additional funding from new partner MACSF to equip the former Safran 1, with foils designed by VPLP. They will be “less extreme and more conventional than those on Charal,” explains Vincent Lauriot-Prévost. MACSF has a very light, fairly slender hull, it seems perfect to find a new lease of life with this extra power. Maxime Sorel’s virtual sister ship V and B(ex Le Souffle du Nord) remains in its original configuration. But the skipper (as others) may modify it next winter after the Transat Jacques Vabre whilst retaining the qualifying miles already accumulated.

What of the future?
The cost of a pair of foils with apertures and mechanical systems varies from 500 to 600 000 euros ex tax. This high expense might be what may hinders future developments. Right now there is nothing within the rules which really limit development and performance potential. “At the end of the day the only limit is keeping the rig up,” chuckles Sam Manuard. The moment of maximum static recovery for the mast is readily exceeded because of the added power of the foils.

In fact, between the first and latest generation, the surface area has more than doubled. The increased loading requires a much greater strength and structural integrity of these composite pieces and that means substantially increased cost. And specialist builders capable of producing these parts in an autoclave, such as Persico, CDK, Multiplast, Heol Composites, C3 Technologies or Lorima, are very limited. “We might come up with problems of fairness in terms of equalising cost and manufacturing monopolies,” anticipates Antoine Mermod, the president of IMOCA, “even if I think that there  will be some convergence in designs which will emerge. We are now thinking of proposing to vote in March 2020 for a draft framework for 2024.”

By then a Vendée Globe and an Ocean Race will have been run. And a huge amount of data will have been accumulated. What generation of foils will we be at by then?