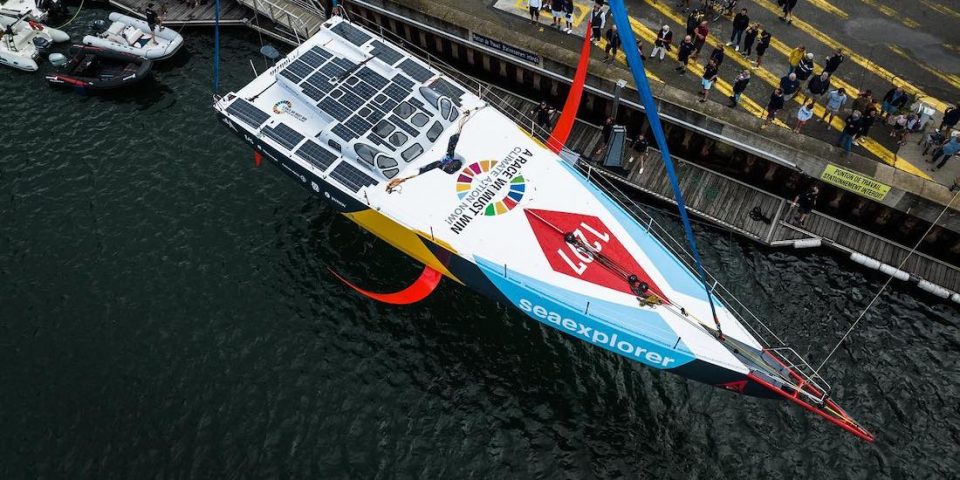 Quentin Lucet on: “Designing the boat where the sailor will be most comfortable to get the best from it”

Maliza – Seaexplorer, Boris Hermann’s new Imoca which is designed for both The Ocean Race and the Vendée Globe, was launched in Lorient on Tuesday. Among the dozen strong team from the VPLP studio involved in the project, Quentin Lucet, leader of the agency’s racing department, explains to Tip & Shaft the key points and why particular choices were made.

► How did this project come about?
We had already worked with Boris before the Vendée Globe, fitting his old Imoca with big foils so that he could have a more competitive configuration. So we stayed in contact with him during the Vendée Globe. We were able to talk throughout the race and that really allowed him to imagine what a new boat could look like. The Vendée Globe is such a long race that there are many different phases in terms of intensity, sea conditions, wind, positions vis-à-vis other competitors.  As architects, we personally are not ever going to be racing solo in the Indian Ocean on an Imoca. It is crucial then to be able to live the feelings of the sailor, to become as immersed as is possible in the way he uses his or her boat and to understand the expectations. With Boris it allowed us to establish the specifications from April, less than 4 months after his finish in Les Sables d’Olonne, then to launch the modelling, research and drafting in May and to start the construction of the moulds in June.

► The last Vendée Globe especially highlighted the difficulty of the last foilers to pass over or through the waves in rough seas. Is this an observation that you share?
Totally, we have not succeeded in really reaching the potential of the boats of the last generation. During the transats, there was no doubt: the foilers were out in front. And in the Vendée Globe, it was no longer so obvious, as demonstrated by the races of Yannick (Bestaven) and Louis (Burton). That challenged the thinking of the designers and the sailors. The boats were accelerating too fast and when they hit the waves it was very uncomfortable. You slam into a wave,  you lose 15 knots of deceleration, you have to restart. That was something we didn’t fully understand.
► How did you respond to this issue on the new Malizia?
We wanted to pay more attention to the average speed of the boat. The idea is not to have the fastest hull, the fastest foils, but to ensure the best mix between all the structural elements of the boat. To facilitate the smoothest flow in the more dynamic sea states and avoid jerks and slams. We worked on the design of the hull with a fairly high bow on the water, reviewed the geometry of the keel shapes and the immersion of the transom. It has a hull which is intended to be pretty powerful and wide enough with a freeboard which allows it to have a more seaworthy but being less exposed than previous generations The cockpit is advanced with a coachroof which further protects the skipper but which also allows good all round vision.

“Designed to have the capacity
to live with five on board”

► How have the foil designs evolved?
They have been designed so that their capacity for self-regulation is a little more than before. The idea is that they generate power gradually when accelerating the boat with less lifting surface. Compared to the previous generation, they are more versatile and can evolve between a V shape which will regulate better or more horizontal surface in order to generate more lift. One of the areas of work was to allow their actual activation periods to be longer than before, especially at all downwind speeds.
► Boris also talked a lot about the importance of the strength, the solidity of the boat…
Yes, that was an important point in the specifications. The team’s schedule is indeed very tight: just one summer now to make it more reliable, then the Route du Rhum, The Ocean Race, the Transat Jacques Vabre back to back pretty much. So you have to have real confidence in the platform and there won’t necessarily be time to step in later and reinforce the structure.► What impact did participating in The Ocean Race before the Vendée Globe have on the design of Malizia ?
We are all aware that the boats will be even more stressed than in a single-handed race. From a structural point of view, the overall geometry of the boat and the platform have been designed to have the capacity to live with five on board. Ergonomics allow everyone to be involved in maneuvers and still to be protected. The cockpit is higher, wider with many windows to see ahead and behind. The Malizia team produced a complete scale model of the cockpit to take care of all the details when the crews are on standby, on watch, etc.► We are seeing now that from now on, the human aspect is taken into account, that everything is not just a question of pure performance.
Yes indeed, that is the starting point. We wanted to put the sailor(s) at the center of the boat design. The objective is not to design the fastest boat at all costs but the one where the sailor will be the most comfortable to get the best out of it.

► Three other boats have been launched: PRB, V and B-Monbana-Mayenne and Charal 2. Are there any trends emerging from these representatives of the new generation of Imoca?
With the gauge constraints, we see that there are rather convergences on the appendages, even if the geometries of the foils are different. On the other hand, in terms of hull shape, hull design, deck plan, these are really diametrically opposed philosophies. The trend is certainly to raise the bows, but the rest is very different. It will be instructive to see how this translates on the water.► How are the philosophies diametrically opposed?
Charal 2 looks to have a very narrow and tight hull while her cockpit is very aft. And it seems designed mainly to operate in foiler mode by counting on the dynamic righting moment of the foil.► What do you think, precisely, of the rudders of Charal 2, located very close to the axis of the hull?
This is a very interesting new path. There are bound to be questions: is this possible within the framework of the rule? Will this work? It’s part of the compromises to be made between the drive for innovation but that needs to be made reliable and the more robust, proven choice that can work right away.

► You designed Charal and Hugo Boss for the last Vendée Globe. Do you have other new Imoca projects for the future edition?
We are discussing with Armel Tripon looking to design a boat which will be quite similar to that of Boris. In addition, we will do some updates on existing boats. Build times right now are long and yards are very busy. However, one of the performance criteria for the teams is to have the boat back quickly in order to make it more reliable. For example that is what we did by modifying and reinforcing the bow of Giancarlo Pedote’s Prysmian Group last winter.