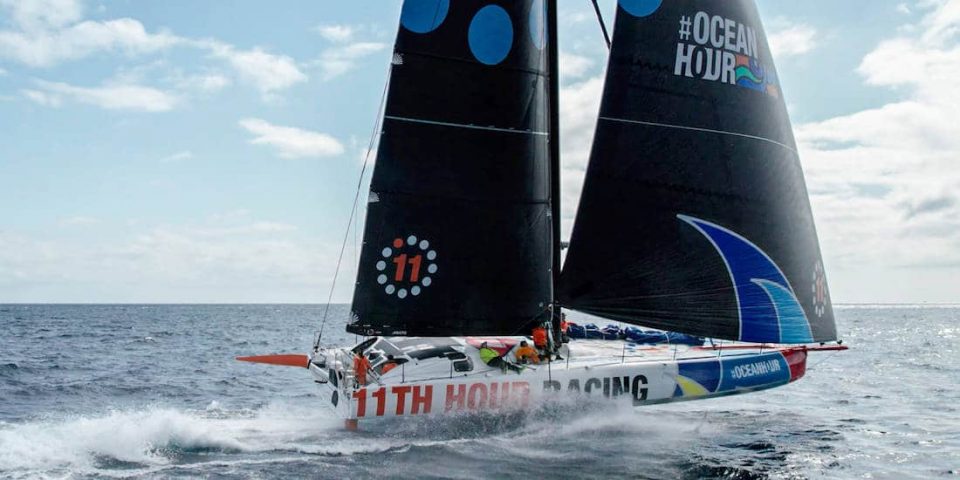 Pascal Bidégorry has had a busy summer. After The Ocean Race Europe in June with 11th Hour Racing 1 (the 2015 former Hugo Boss), he has helped prepared the launch of the new Imoca for the American team, their Imoca 60 11.2, on which he has just sailed for the first time and on which he will compete on the Transat Jacques Vabre with Charlie Enright. And he has been sailing with François Gabart on the new SVR Lazartigue. He updates Tip & Shaft on his recent activities.

► We imagine that you are following the Solitaire du Figaro, what inspires you about the race of Pierre Quiroga, who has just won his second consecutive stage? It looks like he’s in the kind of state of grace that you experienced when you won the Solitaire in 2000 …
Frankly, with all the ups and downs, the rocks, the transitions, the currents on this super complicated third stage, his win is something big, he always managed to stay ahead. I really admire what he has been doing it. And indeed, it reminds me a little of the same state of grace. But of course – and he doesn’t need to be told this, he knows himself- until he crosses the finish line on the last leg, nothing is done and dusted. Looking back at it, when I found myself in his position, I told myself that the best way not to be stressed was to be out in front, and I had won the last stage! He has nothing to question himself about, he should continue to do that he has been doing well, the things he has been doing from the start.

► Let’s talk about the 11th Hour Racing Team project, the new boat has just been launched, what are the characteristics of the new Imoca?
Compared to the last generation, it is a boat much more based around power, on the hull there is a  large step which makes it possible to reduce the wetted surface very quickly on low heeling angles – and the foils are very large and powerful. That means that they are loaded a lot very early on, and so I am wondering how we are going to manage this power and manage to fly well by adjusting the pitch of the boat. I think we will have a lot of fine-tuning work to do. It will take more time to learn how to use this boat than those on the last Vendée Globe, because it is a boat that will perform better, but which is harder. Even so it’s a little hard to tell you very much about it, because we only sailed for three days, one of which was load testing. But I think it’s a more powerful and more aggressive boat.

“I found the boat
super violent “

► What surprised you most during these first sails?
What surprised me was really this power, the really strong ability to accelerate and take off, we peaked at over 30 knots for ten minutes, I found the boat to be extremely violent. When you come off of a few days of Ultim sailing where you are comfortable at 45 knots, and it feels pretty cool, that’s not so cool at all! But I think this mainly comes from the shape of these foils and the fact that they were really designed so much with performance in mind. There will be a second set of foils that will be made for The Ocean Race, the idea on this first one was really to put everything we could find in terms of performance on to the table, and to see how the guys could handle it and work with it and the instability of the boat with the very maximum of performance, in order to then take stock of whether we have gone too far. It really is a proper high performance approach.

► This is a boat designed for crewed racing for The Ocean Race, how is that evident?
The cockpit is much bigger and much wider, with the possibility of putting on a second pedestal. Today, when you are solo, everything is close at hand and in essence the cockpit is divided in two, you have more room, so there is the possibility of four people working when you do a manoeuvre. Otherwise, it’s a closed cockpit, both for aero and sailor protection, with bubbles on either side that are places which could be used to steer or drive the pilot on The Ocean Race. Today, we don’t really know what the basic rule is going to be; it was to be a boat that was supposed to have helming stations to use but apparently things have changed a bit since then. I wouldn’t be surprised that if a the start of The Ocean Race, we can have the pilots we want, because at four on board, you can’t go around the world with a guy who bars all the time.

► What will be the key goals in the coming weeks in learning to sail double handed?
The main challenge will be to be operational to be ready for the the Jacques Vabre, I am not thinking about any sporting result, but of the feasibility of making it work. And that will not prevent us from a delivery mode on Tuesday and then lining up on the Défi Azimut next week. It comes around pretty fast but I think it’s a good way for us to take a step forward, really the best way to move forward, I hope we can switch to race mode from next week.

► And on the Jacques Vabre, what will be the objective?
I’m just not telling myself that we’re going to beat them all, that has been me before at race starts –not saying it but thinking it – now this time not at all. We are heading out with a learning goal, with the objective of deciphering and understanding this amazing machine that we have in our hands and finding out what we do not know. It’s not a step on from Apivia nor 11th Hour Racing, it’s a much more committed boat and it’s going to be more complex to learn. So the idea is going to be to make this beautiful machine reliable, afterwards, we will have the time to have fun later, in November.

► What will be the program thereafter?
After the Jacques Vabre, the boat will come back by sea and the team is studying different scenarios. Personally, I would encourage Charlie to make the return trip solo, or at least part of it, for his own experience, that’s important. For my part, I think I will go back by boat, but probably on three hulls, but nothing is set in stone. First of we are going to see how the Transat Jacques Vabre goes and then  we will go from there. And in 2022, as far as 11th Hour goes, the boat is going to do a Transatlantic roundtrip for training and staying two months in Newport, because it’s an American project.

► The boat is built first and foremost for The Ocean Race, so the race is on your schedule?
Yes, of course I’m signing up for this project. But I will now ask you a very simple question: do you know what it’s going to be like, The Ocean Race? Do you? No ? Neither do I. So I’m not asking myself questions today that I don’t have the answers to, we’ll see in due course, but yes, that’s the goal. And beyond that I am also working to be able to be in the next Vendée Globe. I’ve been busy all the time for months on end, but every now and then that I have taken an hour or two out of each week to try to solidify my plans. It’s too early to talk about it, but it should not be just a dream to see me on a boat in the Vendée Globe in 2024. It really is a main goal for me and that doesn’t stop me from or compromise doing The Ocean Race in whole or part of it, I want to go racing and make the most of things.

► You also sailed with François Gabart this summer on his new Ultim SVR Lazartigue, how was it?
Awesome. I loved it. The MerConcept team has done an incredible job. From the point of view of pure performance the gap is not necessarily that bit to the previous boat (Macif now Actual), on the other hand, it flies much better, it has an ability to fly in a seaway which really blew me away. I have a great soft spot for this way of sailing and the use of these boats, it’s the best thing and it only brings me good memories. It’s really just fun, pure sailing, these boats are flying very fast and the stability is impressive. It is about the use of technology, fun, speed, it’s brilliant!