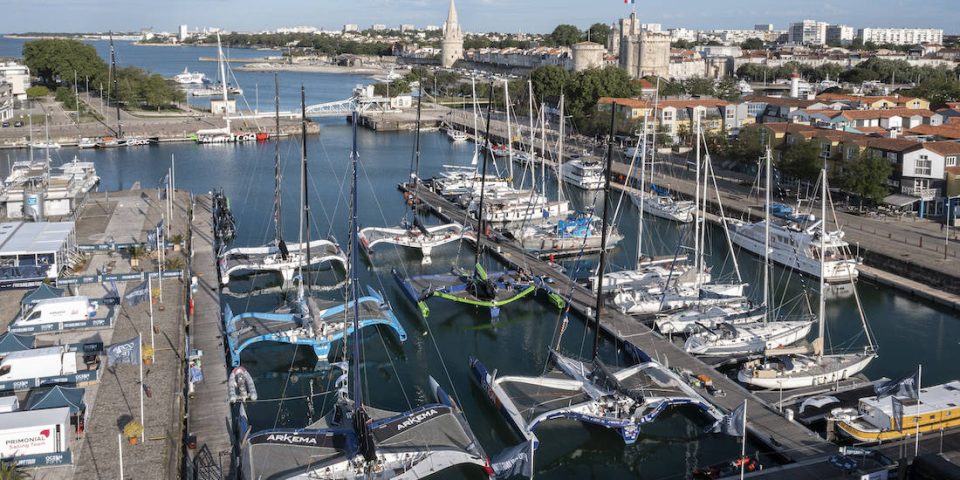 On Tuesday the organizers of The Race Around announced that the start and finish of the new Class40 round the world race would take place in La Rochelle. Thus is clearly another sign of the historic city’s renewed interest in ocean racing. Tip & Shaft investigated.

In the 1980s and 1990s, La Rochelle was one of the French epicenters of offshore racing, hosting a number of races – Grand Prix of multihulls, La Rochelle-New Orleans, stages of the Solitaire du Figaro and the Volvo Ocean Race, Mini-Transat (until recently for the latter) -, while several boats in the colors of Charente-Maritime have been campaigned by local racers, as Pierre Follenfant and the current mayor of the city, Jean-François Fountaine.

“Forty years ago, the Société des Régates Rochelaises was the Mecca of sailing. It was great, with an incredible pool of sailors and designers, as Philippe Harlé, Philippe Briand, Michel Joubert, Bernard Nivelt and others, everybody dreamt to sail in La Rochelle !” points out Christian Karcher, three-time America’s Cup winner, who is based on the Ile de Ré since the late 90’s and was until last summer the team manager of Antoine Cornic’s Imoca project.

This golden age is long since over. “I wonder if the yachting industry has not to a certain degree stifled other activity; Neel, Dufour, Fountaine-Pajot represent 95% of La Rochelle sailing activity and that all takes up space”, adds Christian Karcher. Growing competition from other ports, particularly in Brittany (Port-la-Forêt, Lorient, etc.), has also played a role, but indicators now suggest that La Rochelle’s offshore and ocean racing ambitions are back, starting with recent announcements of hosting several races. Indeed last year that was the case with episode 2 of the new Pro Sailing Tour, which could return in 2023. The city has also turned to a class that is on the up and up, Class40, which over the two coming years will host three major events on its calendar.

“A real dynamic around offshore racing”

First off there is the Class40 World Championship (June 13-18), where at least 20 crews are expected by the organizer, Grand Pavois Organisation. They are also preparing for the second Défi Atlantique, the return transatlantic race of the Route du Rhum (April 2023). And now also the organizers of The Race Around, a race round the world in Class40s (double and solo), announced on Tuesday that La Rochelle would host the start (September 10, 2023) and the finish of the first edition.

“Other cities were in the frame [notably Bordeaux, editor’s note] but La Rochelle has been our first choice from the start. It is a city with a strong maritime heritage and past, the first in France to have hosted the Volvo Ocean Race [during the 1997-98 edition, Ed]. It is easily accessible from Paris, which is essential for an international race like ours, and the Bassin des Chalutiers is located right in the centre of the city. The city is also committed to sustainable development and this speaks to us because we are ambitious on this subject. We finally feel that there is a real dynamic around ocean racing, we want to support this movement“, says Emmanuel Versace, French representative of The Race Around.

This dynamic has led to the creation of a new offshore racing center, piloted by the Atlantic Cluster, an association that brings together stakeholders in the nautical and marine sector in Nouvelle-Aquitaine. “The project is on the right track,“ says Gaëlle Pallu de la Barrière, director of the Atlantic Cluster. “It was presented to the agglomeration of La Rochelle last Autumn. In principle it has been validated. This center will happen on the identified site, in agreement with those who are active in the fishing businesses.” The site is within the fishing port, which is in deep water and facing the open sea, so accessible at any time of day or night, whereas for the moment boats with a deep draft (Imoca, Class40) have to moor in the Bassin des Chalutiers, which has a major drawback: you have to go through a lock, which is restrictive in terms of timing.

Yannick Bestaven has accelerated the movement

The project will take place in two stages, first with the construction of a temporary pontoon to accommodate the Imocas of the two skippers based in La Rochelle, Yannick Bestaven and Antoine Cornic. The cost of this operation, financed by the Urban Community of La Rochelle and the department of Charente-Maritime is 250,000 euros, according to the town hall office. “The idea is to lock in on the arrival of Yannick Bestaven’s new boat [Verdier plan whose launch is scheduled for early July, editor’s note], we want to welcome it in good conditions”, underlines Gaëlle Pallu de la Barrière.

If the preliminary studies had in fact started a long time ago there is no doubt that the Vendée Globe win by the skipper of Maître CoQ who has been base in La Rochelle for a very long time has really given a big boost to the project. Bestaven is very committed to the initiatives but he does not want to put himself forward – he did not respond to our requests – but he has joined the board of directors of the Atlantic Cluster. “His performance was a trigger. The idea is to offer a more structured and complete operation on the sporting level for offshore racers”, confirms to Tip & Shaft Jean-François Fountaine, mayor and president of the Urban Community. “Yannick’s victory was a plus, but it does not start from there. For more than ten years, he has very clearly been the driving force behind the desire to set up an offshore racing centre here and he pushes for this with all the authorities“, adds Christian Karcher.

What will the final project look like? “We are planning the installation of a 200 or 250 meter pontoon along the southern breakwater of the fishing port, to accommodate around ten Imocas or other types of boats with deep draft or large beams, like the Class40 or the Ocean Fifty. We will also have to lengthen the walls to protect them well from the swell,” replies Gaëlle Pallu de la Barrière. On shore the Atlantic Cluster recommends building ten buildings of 650 m2 each requiring the adjacent land to be made suitable for building on and that requires time. This hub will not be fully operational before the end of 2024 or beginning of 2025. The Urban Community and the department will take charge of all the infrastructures at a cost which has not yet been determined.

Even while waiting for this center, more and more sailors are making La Rochelle their training base, all the more so since the creation last September of a new offshore racing training structure, the Center d’Excellence Voile, based at the Minimes marina. “We are taking over the activities of the Mini 6.50 division [created in 2010, editor’s note], which was well structured but needed fine tuning. We relieved coach Julien Pulvé of a certain number of tasks that took up his time, so that he could devote more time to training,” explains Laurent Haÿ, president of the Center of Excellence Voile. “Today, 25 minis train in La Rochelle and we can consider expanding the group to 30 runners, but no more. We want the sailors to be well committed, with serious projects, to give them the means to progress.”

The structure – which relies on an annual budget of 300,000 euros – also supports a group of around ten Figaro sailors, such as local Alexis Thomas and Robin Marais but also English and Irish ones, trained by Etienne Saïz, former coach of Team Vendée Formation. The Vendée center has indeed stopped its training activity on the water this year and is sending the sailors it trains to La Rochelle for this part. “Other racers are knocking on the door. Some centers are saturated and there is a real demand for training,” adds Laurent Haÿ.

He believes that the Voile Center of Excellence is ultimately intended to accommodate all classes, Class40 and Imoca included. “We are filling a hole in the market. In La Rochelle, young people were very well trained in dinghy sailing and then at Olympics level. But when they wanted to progress in offshore racing, they didn’t have a suitable structure locally so they went elsewhere, especially to Brittany. With the Sailing Center of Excellence and then the pole at the fishing port, they will be able to make all their progress on the territory of La Rochelle, from dinghy sailing to the highest level in offshore racing.”

Can La Rochelle, in the long term, compete with the Sailing Valley around Lorient? “Since Lorient is pretty much saturated, I would speak more of being a complementary facility“, analyzes Christian Karcher. “But everything is here you need for it to work: a station, an airport, a president of the cluster who knows the pathway and the business, the Vendée Globe pontoon is three hours sailing from here and we have very reputable cutting-edge companies, such as Hydroem, C3 Technologies… We are opening a ten-berth deep-water pontoon here, in the following three months, the teams will be there!”