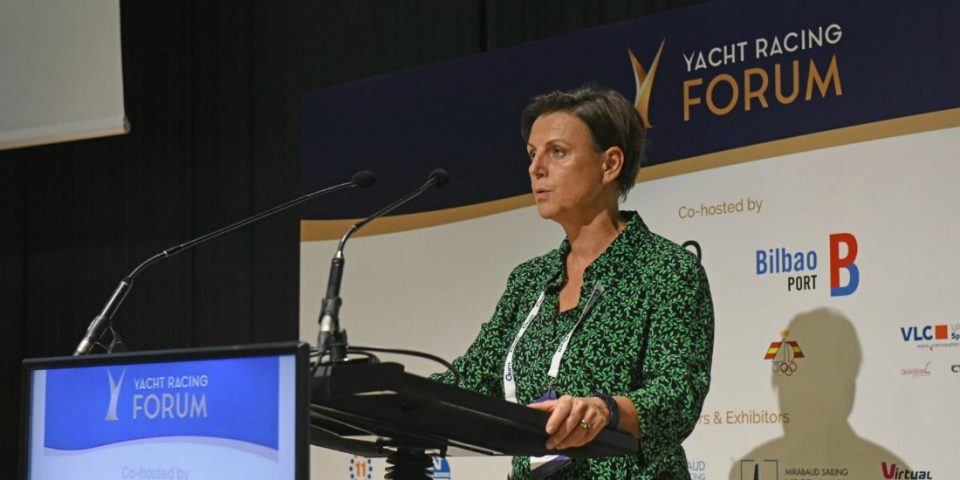 Vicky Low: “Gender discrimination is not just on the water”

The World Sailing Trust released its Strategic Review into Women in Sailing on December 5th. The report was initiated to explore the gender balance, or indeed imbalances, which exist across the whole sport of sailing. It was authored by Vicky Low, long time communications and marketing professional who has worked extensively with teams in the Olympic, America’s Cup, Vendée Globe and Volvo Ocean Race, not least representing three all female Whitbread/Volvo teams, Heineken, EF Language and more recently Team SCA. Vicky presented the report at World Sailing’s Annual Conference in Bermuda and then at the Yacht Racing Forum in Bilbao. The report records insights from 4,500 respondents aged 11-83 from 75 different nations. Tip & Shaft spoke with Vicky Low…..

You have now presented at both the World Sailing Conference and in Bilbao, were there significantly different takeways from both?
At the World Yacht Racing Forum where I really presented the findings very quickly to get on to the discussion. It was very useful working with Shirley Robertson who was brilliant, finishing up by saying ‘this sport has made a pariah of plastics within five years, surely we should be approaching gender balance the same way?’. But in general The World Yacht Racing Forum is a different audience entirely, World Sailing is much more political, about governance.

And the report has garnered positive feedback, this was clearly needed?
Since then we published the report, the response has been positive even if I don’t think there were any great surprises. The recommendations are not extraordinary because we don’t need to be doing anything extraordinary. We need to go back to the very essence of what the sport is and be fair and provide opportunities. That is the key thing. It is about opportunity and providing opportunity.

In terms of sailing’s disciplines which areas stood out as best and worst?
We looked the three key areas, dinghy sailing, keelboats and multihulls. Dinghy sailing was the ‘best’ in the sense that 58% of women felt they were discriminated against whereas in multihulls it was 71%. We had over 3000 comments which we analysed. The trend comparing multihulls with dinghies was the discrimination worsened with age especially in multihulls. We looked very, very specifically at keelboats in light of the new Olympic offshore event, and in keelboats 64% of women said they had experienced discrimination while sailing keelboats. Break that down by ages and when we had established the incidences of gender discrimination were so high generally across the sport. So we specifically chose to look at the 11 to 30 age group on the basis that anything we can do to improve the pathway for people starting in the sport will have a positive. We drilled down and looked at keelboats specifically in 11 to 30 year olds and found 61% of 11 to 18 year olds, 64 % of 19 to 25 year olds and 74% of 26 to 30 year olds had been subjected to discrimination. So it gets progressively worse with age and then plateaus out. But it does tie in with women leaving the sport. Women leave sailing around the age of 17 to 18 or around the age of 23 to 24. In fairness that is common to youth sailing. Compare that with men who leave at 17 and at the age of 43.

Mandating mixed teams, has that been popular according to what you found?
Of the people who sail competitively on keelboats and who responded, 73% of women and 59% of men agreed with events which mandate mixed teams. Those women who sailed regularly with a mixed crew were 25% less likely to be discriminated against because of their gender. Issues of discrimination were use of language, assuming because a woman walks on a boat she does not know what she is doing, going back to the old stereotypes, ‘you are not strong enough’, ‘you can’t steer’ without any preconceptions. To be fair that is a reflection of what often happens in every day life. This is more extreme. But where you have men and women competing together equally, as in other sports, then the tendency for gender discrimination does reduce dramatically. It’s great to see the new Youth America’s Cup initiative and the likes of the Midsummer Match Cup where there are strong crews in strong teams who dropped two of their usual crew to sail with women, that was positive on all sides.

Any nations stand out as better.  France, one would suppose might be among the better countries?
Incorrect. 75 different nations completed the survey, 4,500 different responses. We looked and in countries which had more than 100 respondents at least 85 per cent reported gender discrimination. Top of the league, worst, are the most established sailing nations, the USA, Holland and France. You can take, for example, that the USA has a major historical issue linked to the college system and the way the college sport system works there. That has been well documented and change is happening there. The most developed, established sailing nations are the worst offenders but that is because the sport does go so far back there. The emerging nations it is relatively new. The UK is actually better at just over 80 per cent. The worst was at 93%. The other area to touch on is that gender discrimination is not just on the water. It is endemic across the whole sport, we analysed race management, umpiring, administration. Of the 33 female umpires, for example, who answered the survey, 73% had experienced gender discrimination, (most often abuse on the water from competitors). That is gender based abuse. As an example we have a case of one 15 year old girl who reported that she felt she was not listened to in protests because she was a girl and had one coach who had blatantly said that girls were not as good as boys at sailing. That is an example which is echoed through the document.

So what are the recommendations?
We have divided the recommendations  into three areas, Policies and Best Practice, Increasing Participation and Developing Female Leadership. The way the Olympics are going, by 2024 in Paris we have to gender equal across everything we do, not just on the water but the support and coaching staff, the on the water race management personnel, and the moment there is only a very limited pathway. As part of Policies and Best Practice there will be a Diversity and Inclusion working group which will be lead by the World Sailing Trust with support from World Sailing with a number of strategic partnerships. There will be a Gender Charter, a charter which will be a one page which has to be taken on board by MNA’s by sailing organisations, by class associations and World Sailing needs to have an equality policy.

IMOCA and Vendée Globe are really good by comparison?
Yes for the Vendée Globe as at current registrations we are at a 21% female participation level which is very good. But look at the 52 SUPER SERIES 1.4% of the crews are women, the Transat Jacques Vabre in the end was 7% the Route du Rhum 4%. America’s Cup 0%. There is still a lot to be done. But I liked the quote in the document from Ian Williams “Change is good for everyone. It has to happen over a period of time. The key thing is that no one is getting pushed out. It should not be about taking opportunities away but about creating opportunities for all.” That really underlines everything we are trying to do here. It is not about not getting boys on boats it is about giving women the opportunity to be on these boats. The Ocean Race is great, it will be mandated to have women on every single boat. That is a big step on from last time. Events like the World Match Racing Tour are encouraging more women to take part.

Is improving gender balance in Olympic sailing sport helping in other areas of the sport?
We will have to see. What is for sure is that by increasing the opportunities for women at that elite level you do create a stronger pathway and so hopefully attract more people. There is no argument that the Olympic pathway is not a good thing, but it is really about the opportunities beyond that. How do we get women into the 52 SUPER SERIES and the Route du Rhum and more than six per cent sailing the Caribbean 600. That is the issue. The Olympic sailors are such a small part of the sport.

Your experience on the Volvo/Whitbread, have you seen a change there over the years?
I did Heineken in 1993-1994, then EF Language then Team SCA and I would say there is very little difference between all of them. The Team SCA women had the best opportunity but were still trying to fit into what in essence was a male mould rather than developing something which could have been developed more. But it (Team SCA) did go on and drive the initiative to have women on board in the last race and now mandating this next time around. It created that pathway. This, now is about a culture change and I do believe it is happening. When I started this programme I said there are two elements to it, both opposing factions – the bra burning harridans at one end and the red trouser element at the other and they are never going to agree. But the vast majority in the middle want the change. We have seen it in cycling, rugby, football.