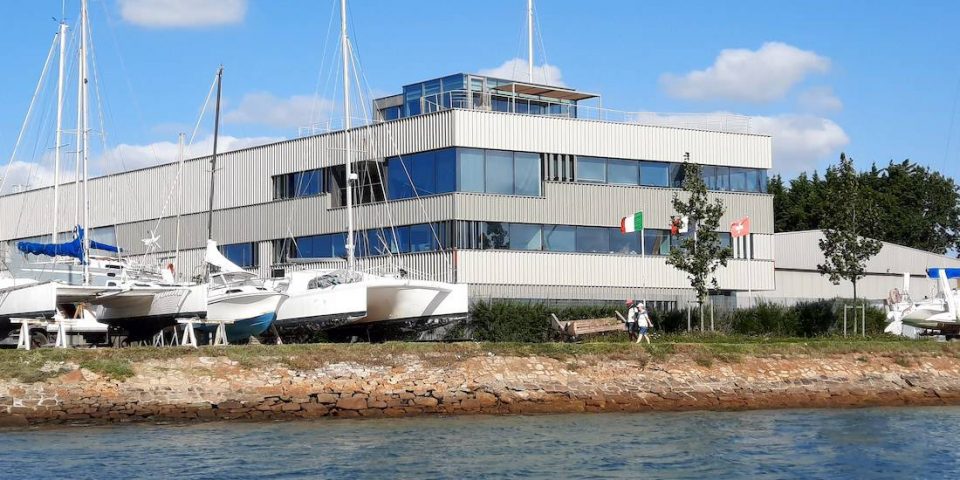 Yann Penfornis: “Now, the third chapter in the history of Multiplast”

Managed for 28 years by Gilles Ollier then for 13 by Dominique Dubois, legendary French boatbuilders and multi discipline composites specialists Multiplast has just recently changed hands. On Tuesday the takeover of the Carboman group to which the Vannes shipyard belongs was completed by HBH group which is headed by Damien Harlé and Jean-Denis Bargibant. Yann Penfornis, who remains managing director, explains the implications of this takeover.

► Can you tell us about the terms of the takeover of the Carboman group?
Well it all started two years ago when Dominique Dubois, the president of the Carboman group, decided to participate in the Ocean Globe Race in 2023. He then prepared his own departure and spoke to employees about the sale of the company. At the beginning of December 2021, he was in contact with Damien Harlé and Jean-Denis Bargibant, the leaders of the HBH group, which has two production sites, including Ouest Composites Industries, based in Auray. The initial discussions went well and we entered into almost exclusive discussions at the beginning of 2022. Even before the formalization of the takeover, as potential buyers they were involved in our decisions on long-term projects. And they were at our premises two or three times a week. The sale was finally signed on Tuesday. The transition is done in excellent conditions, there is no break in decisions, no loss of time.

► So you will still be the Managing Director of Multiplast?
Indeed. Here we are approaching the third chapter in the history of Multiplast, a beautiful new chapter with two good managers younger than me, their plan is for the three of us to work closely together. From our first meeting, Damien Harlé and Jean-Denis Bargibant wanted to make sure that I stayed in the frame. I said yes, provided I could continue to come to the office every morning at 6:30 a.m. wearing a smile. The new buyers are the type of guys I like, there is no reason for it to go wrong. It’s important to have their trust. My responsibilities remain the same. I had already been a shareholder for about ten years, my holdings go back just from Multiplast to the group level.

► What do you remember from the 13 years spent alongside Dominique Dubois?
Many things. Superb projects like Groupama 4 or Gitana 17 (the Maxi Edmond de Rothschild, editor’s note), the VOR 65s, the creation of the Carboman group, the acceleration of our diversification, building new premises, the involvement in very good research projects, the development of a company that has gone from 49 employees when Dominique took over to 110 today. I forget bits I am sure because so much has happened in 13 years! There were also some hard knocks of course. In such projects, there are technical difficulties to deal with and tight schedules to respect. The Covid period was not easy to get through, we had to really push ourselves hard to get the boats out. And at the moment, the prices of raw materials are soaring and there are difficulties recruiting. We have many challenges ahead.

“The buyers’ strategy is

to keep a form of continuity”

► Will Multiplast’s financial resources increase with the takeover?
Not necessarily. The money is not going to be flowing. Each investment will be well thought out and should make it possible to yield a pay off in the years that follow. With this acquisition, we go from a group of 140 employees to 250. As for the turnover, it almost doubles to reach 30 million euros.

► Will offshore racing retain such an important place?
The strategy of the buyers is to maintain a form of continuity. We will of course continue to build ocean racing boats. This activity is in the DNA of the company and represents 50% of its activity. At the same time, we want to continue our diversification in the industrial fields with other very nice projects. For example, we are working with Les Chantiers de l’Atlantique on the Solid Sail project, we are building the rigid sail and part of the mast. We are also collaborating on the Flying Whales airship project. Thales remains a very important customer, we build radars and radomes for them.This distribution between offshore racing and industrial projects suits us well because we don’t want to put all our eggs in one basket.

► What are the current projects in ocean racing?
We are finishing Boris Herrman’s boat, which will leave the yard this Saturday and join the Team Malizia workshop for the installation of the systems before being launched in two weeks. An Imoca like this, for a yard like ours, represents 33,000 hours of work, not counting the appendages, the mast and the boom. It’s a lot more than before. For example, in 2007, an Imoca like Brit Air required 20,000 hours of work. The boats are becoming more complex at all levels and they need to be reinforced more because they go faster. We are also building Paprec-Arkea, Yoann Richomme’s Imoca, which will be delivered at the end of the year. With this project, we learn to work with a new association of architects: Antoine Koch and the firm of Finot-Conq. We have also built the hull and deck of Maxime Sorel’s boat (V&B-Monbana-Mayenne) which has just been launched and we are also currently taking care of repairs on Nicolas Troussel’s boat (Corum L’Epargne). The boat arrived in the yard three weeks ago. We started with an analysis phase of the work to be carried out. The bottom of the hull and the keel area are to be redone. The new structures are being manufactured, we will receive them in early August and the boat will be relaunched in early September.

► You also worked on your first Class40s, the “Clak40s”
We have actually built four Class40s to VPLP designs. Three are already in the water for Nicolas d’Estais, Andrea Fornaro and Martin Le Pape. A fourth will be launched at the end of July for William Mathelin-Moreaux. The background and outlook of these customers is not the same as in Imoca. Class40 skippers and their teams have less experience in building boats and that’s normal. The architect is more involved. The Class40 is smaller than the Imoca, but project management is almost more complicated. We will have four Class40s on the next Route du Rhum and we are not stopping building more in the future.

► You had weight issues with the Clak40. Have they been resolved?
Indeed we were not at the minimum weight under the rules on the first boats. The architects have worked hard to lighten the boats. The latest Clak40s are around forty kilos overweight, but I’m happy with our positioning: the structure is strong, the boat is reliable and we’re close to the minimum weight.

► What about the Class30 project, the 30-foot one-design designed under the initiative of the UNCL and the RORC, to a VPLP plan?
In fact, we now say “Carboman 30”, because the name Class 30 was registered by Class40. The production of the moulds begins next Monday at Ouest Composites Industries. The industrial assembly site for the production of the boats has not yet been agreed. We have about twenty firm orders. From next spring, we will be releasing one Carboman 30 per week. The challenge is to succeed in building these boats on time, while respecting the costs and the quality required. It is a beautiful series production project.

► Is it a challenge for a yard more accustomed to making prototypes to build for series production?
We are used to doing this in our industrial activities. For Thales, we have produced around fifty radars. For our boats, it is indeed less usual, even if we built 200 foils for the Figaro 3, we produced two per week. This requires another organization, a Taylorization of activities, but we are in control.

► What is your opinion on the François Gabart affair and its possible consequences for the profession?
I am not a lawyer so I will not give my opinion on the pros and cons I don’t know who is right but I find this situation really sad, it hurts everyone. Today, a race starts from Concarneau (Finistère Atlantique, NDR) with four Ultims, and François Gabart is not at the start although it is his home port. The public does not understand this at all. At Multiplast, we have worked a lot on these boats and it hurts our hearts not to see SVR-Lazartigue racing. No one will win or gain from this this story. A new sponsor comes into the Ultim class and here we are only talking about compliance, rules, lawyers, courts. These are not good messages. I propose an idea to unblock the situation: the organizers of the Route du Rhum could invite François Gabart in the Rhum Multi class.