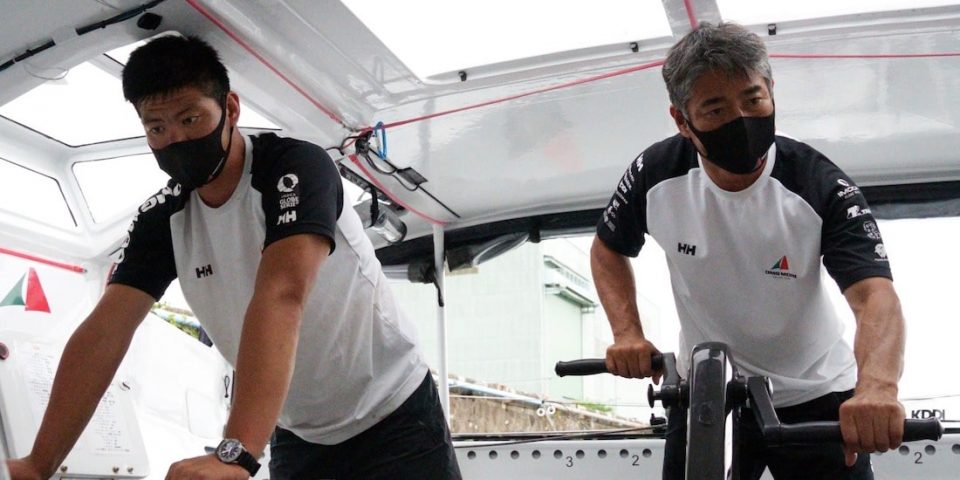 Partly inspired by the French models (Bretagne CMB, Skipper Macif, etc.) and also looking back to the pioneering Artemis Offshore Academy which was an ongoing blueprint, foreign training courses have been created or are planned for the near future to meet a demand for something other than simply signing up to an all French ‘Pôle’, a demand which we see is only increasing. Tip & Shaft investigated.

For the eight years from 2008 to 2016, the Artemis Sailing Academy was the benchmark in terms of training English speaking young skippers from outside of France. Supported by the British fund manager Artemis, the academy was the brainchild of Mark Turner – co-founder of Offshore Challenges which became OC Sport – and Charles Darbyshire. For a long time the project was managed on the ground by Marcus Hutchinson. In the same way as in France it selected and trained up young British skippers, many of them transitioning directly from high performance dinghy racing. “For them, breaking into the scene, the whole solo racing arena in France was not at all easy.” Marcus Hutchinson recalls.

With an annual budget of one million euros the Artemis Academy has had up to eight Figaro 2s, and worked with the CEM, the Mediterranean Training Center in La Grande Motte for a long time before settling in Lorient. Alan Roberts, Jack Bouttell, Sam Goodchild, Phil Sharp, Richard Mason, Will Harris notably cut their teeth here.

“We were not only training skippers, but also people capable of going on to set up and sell their own project“, recalls Marcus Hutchinson. Each year, the sailors participated in Cowes Week alongside business leaders invited by Artemis, which allowed them to promote their future projects. The academy, however, suffered a sharp setback after eight years of existence: “In 2016, there was a change of management at Artemis which redeployed its investments”, says Charles Darbyshire.

Charles Darbyshire tried to continue the initiative without a title sponsor – with the Offshore Academy – but the means were lacking. And the move to Figaro 3 in 2019 put an end to the programme. However Darbyshire would love to relaunch the idea: “We are still looking for a sponsor, we are keeping our offices in Cowes and we can relaunch the structure at any time.” According to this former leading light at OC Sport, the demand has not dried up: “More than ever this new generation needs this type of support.”

This demand has surely driven DMG Mori, sponsor of Kojiro Shiraishi, to launch a call for applications in June 2021 to join the DMG Mori Sailing Academy. “The DMG Mori CEO, Doctor Mori, was keen to develop sailing among the Japanese, but also to support young people with the dual profile of skippers and engineers,” explains Shota Kanda, the team’s public relations guru.

They received more than 200 application files, 15% of which came from abroad, two trainee skippers were selected, the Japanese Federico Sampei, already a member of the DMG Mori team, and the engineer Laure Galley, with the Mini Transat 2023 as the target for two prototypes designed by David Raison set to be launched at the end of March.

They are accompanied by two trainee co-skippers: Hajime Kokumai, who comes from Olympic sailing, and Alexandre Demange, who is finishing his engineering studies in La Rochelle. Their target is the Mini Transat 2025. The initiative is destined to be long-term with a new selection planned at the end of the first four-year cycle.

The Swiss OSS Academy
is looking for partners

Like the DMG Mori project, also based in Lorient are the Swiss Valentin Gautier and Simon Koster, who were recently second in the Transat Jacques Vabre in Class40, who are setting up the Offshore Swiss Sailing Academy (OSS). “Every year, Swiss skippers contact us to ask us for advice on how to carry out a project, the financing, the technical aspects… We wanted to share our experience”, explains Valentin Gautier.

For the moment, the project consists of organizing sailing blocks on their Class40 for young sailors coming, like them, from the Geneva Regatta Training Center, so that they can compete in the ArMen Race in May and then the Class40 World Cup in La Rochelle in June. In addition, they support Anaëlle Pattusch, a 19-year-old Swiss woman who dreams of taking part in the Mini Transat in 2023. “We help her with her preparation, her business and administrative processes and to facilitate her contact with the community.”

But the Swiss duo wants to go further looking to “bring the Atlantic actually to Lake Geneva” and create a real academy. With their Class40 and two Minis which they plan to buy if the project gains enough momentum (one prototype and one production), they aim to select two skippers and accompany them for two years by providing the boat and the budget. They are working hard to finance this project. “For a serious and ambitious structure, we would need 800,000 € per year“, says Valentin Gautier.

Right now the duo are struggling to attract partners: “It’s not easy to convince them to sponsor a project nearly 1,000 km from Switzerland, but we have had very positive feedback from companies and above all, the there are many young skippers who dream of ocean racing with us, there is a real dynamic.”

Marcus Hutchinson who is regularly approached by non French sailors, makes the same observation. He launched the Vivi Offshore Academy in 2019 to meet this demand. Last year, he notably helped two American skippers (Jesse Fielding and Francesca Clapcich) and an Englishman (David Paul) with “a turnkey project”: a Figaro 3, preparateur and tailor-made training for each of them to come to France, it is up to them to find the funding.

This year Marcus is working on the project management of several skippers of the Figaro circuit, including the German Sanni Beucke (silver medalist at the Tokyo Olympics in 49erFX) and the Englishman Paddy Hutchings, who are attached to Lorient Grand Large. But also two Irishmen (Kenny Rumball and Conor Fogerty) and an Englishman (Tim Long) who train at the pole in La Rochelle.

“It is important to give them the benefit of a structure, of know-how, advice to progress when French training centers are difficult to access for foreigners which is still the case for Port-la-Forêt, concludes Hutchinson. I think that these international initiatives will be structured and developed because we are facing an influx of young non French sailing who aspire to make a career for themselves in ocean racing.”