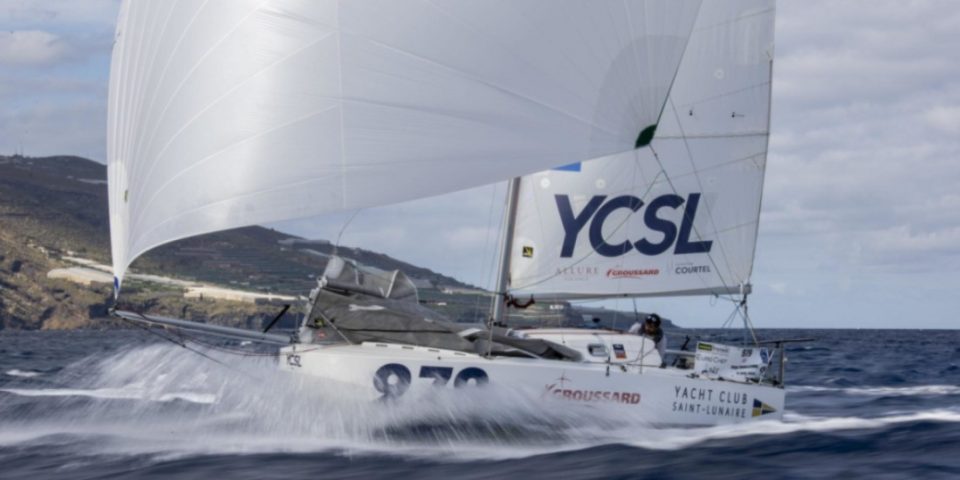 Mini Transat: What happened on the first stage

The first stage of the Mini Transat, won in the series division by German teenager Melwin Fink (19) with a big lead over his pursuers, has produced confusion, as he was one of the very few who did not to stop during a big storm. Now 19 requests for redress have been filed with the jury. Tip & Shaft reconstructed the facts by interviewing the main players.

Friday October 1, 10 a.m. While the first four prototypes are already almost to the south of Portugal, the bulk of the Mini Transat fleet is in the area off Cape Finisterre when they receives a BMS (special meteo bulletin) from race management. “A front was expected [Saturday at the end of the afternoon, Editor’s note], with wind of 35-40 knots, potential gusts to 48-50, and a southwesterly seaway of 3.5 to 4 metres.” explains the race director Denis Hugues to Tip & Shaft.

“It didn’t seem reasonable to me to send Minis in there, so we did a BMS on the tracker – a short text received on the Yellow Brick tags – and Christian Dumard drafted a longer one, broadcast every two hours via the support boats, but also on the BLU vacation of 3 p.m. UT. Competitors positioned in the North Finisterre zone and north of the South Finisterre zone were asked to take shelter while we were advising those in the south in the Porto area.”

Two different instructions, which created uncertainty for some, as explained by Julien Pulvé, coach to the La Rochelle group who debriefed the stage on Wednesday with his racers: “They had the impression of having heard different messages between a request and advice to stop. They would have liked to hear something more definitive, either we neutralize the stage, or we read the BMS and interpret as whoever wants to stop should stop.”

So from the leading pack of series boats, Julie Simon (4th of the stage) says: “We started to discuss it all among ourselves, we were trying to get more information, to know if the race was going to be neutralized. We were a little surprised not to have more precise directives.” Denis Hugues responds: “We had debates on whether to neutralize or not, but there were four boats which had done well on the first front and the ridge. I did not see it as very very sporting to abandon for them.”

Coach of the group from Lorient, Tanguy Leglatin adds: “It’s part of the game of the Mini it’s not the first time that this has happened. We must also remember that there have been tragedies; given the history, then the information from the race director was justified. Afterwards, perhaps the instructions could have been a little clearer, by saying: “From such and such a time, if you are not south of such and such a place we are telling you to go directly to port from such and such a time.””

Within the top group of the fleet, the discussions are in full swing. “We were doing the calculations, we said to ourselves that for us, it would pass, but the part of the fleet further north it was going to be tougher for longer and they would have to stop,” continues Julie Simon. “At one point, two competitors Federico Waksman and Hugo Picard – who relayed the request quite a bit in French and English – offered to stop. We naturally said to ourselves that it was normal to do so also if those behind us were obliged to take shelter, that seemed fair to us, we were not going to gain for three days.” Anne-Claire Le Berre (6th on the stage) adds: “We finally decided to stop, telling ourselves that it was a shame to potentially put the whole Mini fleet in danger”.

During Friday all the boats headed for shelter, in La Coruña, Camarinas, and in the bay of Muros and in Baiona for those further south. That was except for a few intrepid ones, including the German Melwin Fink who was 17th in the series fleet when the collective decision was taken, and the Austrian Christian Kargl (21st). “We arrived around 10pm in Baiona, it was only the next day that we discovered that they had carried on” explains Léo Debiesse (7th on the stage). “We thought they were going to stop in Porto.” This was the case with Kargl who had battery problems, but not with Fink. “It was a bit of a wet blanket it was not in the plans,” says Anne-Claire Le Berre.

Why didn’t the German stop? Reached Thursday by email he responded: “After the storm warning which was replied a lot of times by the accompanying boats, there was a lot of traffic on VHF where they organised in which harbours all the boats will go. I was talking after the warning to Christian Kargl and we couldn’t understand why everybody went so early to the harbour. So we continued and wanted to go to a harbour which was in Portugal 85nm away which we should arrive on 2nd at noon but before we wanted to hear the two new weather forecasts from the race committee. They sad that for the Zone of Porto will be just 30 knots in average so Christian and me decided to continue and go as south as possible to have the weather less strong. Christian had empty batteries so he needed to go to a harbour but for me was no reason to go in a harbour, because my boat and me were in prefect conditions and I couldn’t see a reason to make a stop. At the moment I was still thinking that a lot of people continuing too. The communication on VHF was very bad, just French only the basics were translated”.

In Baiona, the group agreed to set off again on Sunday at 6 am at staggered timings taking into account the classification of Friday morning. “Finally, as it was calm no one really managed to get out on time, except Julie Simon [who explained that she had to paddle Editor’s note], the only one to have respected her scheduled scheduled time, we learned that the group in Muros had left before us at 3 am and so we were a little upset ”continues Anne-Claire Le Berre.

The exit from the bay of Muros was in light winds, but the group which had stopped there subsequently benefited from better conditions than the Baiona’s one. Le Berre an engineer on Team Initiatives Coeur regrets: “After the second start, when you then realize that those who were far behind are in now front of you, you have a feeling of enormous injustice.”

Needless to say at and after the finish in La Palma, the atmosphere is a little weird with Melwin Fink treading a bit warily. “He went to greet everyone, that’s the best thing he could do. A lot of people were correct with him, we tried to understand his decision, which was different from ours, he didn’t do anything illegal“, comments Léo Debiesse.

19 sailors including Léo Debiesse lodged a protest to the international jury, so that the stopover time be deducted from the race time. “We don’t want the standings to be completely disrupted, it’s Melwin who won, but at least the gaps would be reduced,” he explains. If she did not file a protest – the race committee on the other hand claimed against her for entering the TSS at Cape Finisterre – Julie Simon adds: “I finished 4th, my best performance in two years, but it is hard to find pleasure in it. This scenario takes credibility away from everyone’s performance.”

“It’s hard to swallow for those who arrived in Baiona and had nothing to fix but then at the same time we see that others took advantage of the stopover to repair,” said Jean-Marie Jézéquel, who left Muros an was 5th on the stage. “The first front had done a lot of damage, many were very happy to stop to fix. There is not one that has did not fix their boat in some way,” confirms Denis Hugues, that includes Hugo Dhallenne, finally 3rd on the stage, who confirms: “I was in a position where I had repairs to do, the stopover allowed me to start again at 100%.”

The protests will be studied from Monday by the international jury of five members, as explained to Tip & Shaft by its president Yves Léglise. Is a stage cancellation possible? “It is in the rules, but it has to be the last resort there it seems that other solutions can be considered, the trick is to find one which is least bad.”

If the requests for redress are dismissed, Melwin Fink will attack the second leg with a cushion of 19 hours ahead of Christian Kargl and nearly 26 hours over Hugo Dhallenne. A tenable margin? “It’s a lot, but it will depend on the trade winds: if it is strong enough, I think I can recover some time in speed, if it is around 12-15 knots, it will be more difficult.” Léo Debiesse adds: “If we look at the serial gaps in the last two editions of the Mini Transat, there are about 30 hours between the first and the tenth, so the game remains completely open.”