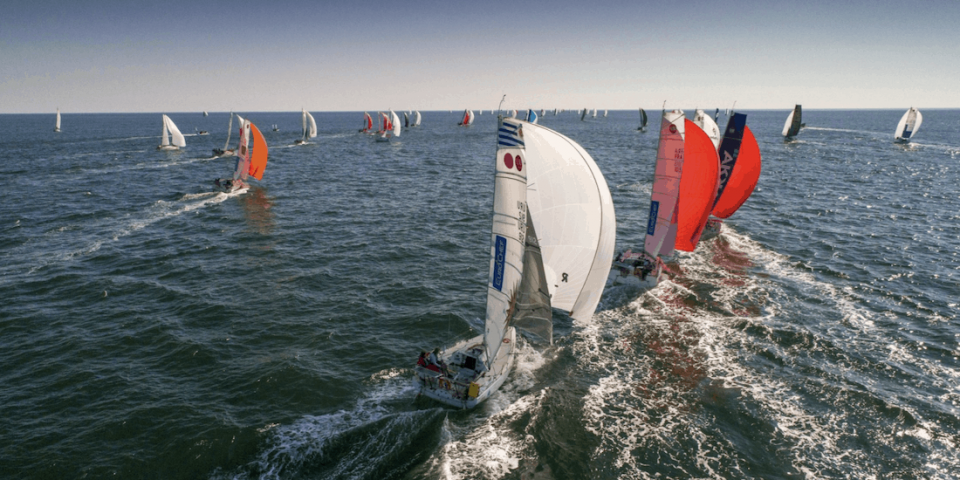 Who will win the EuroChef Mini Transat?

90 skippers – 25 racing in the proto division and 65 in the series – set off on Monday – the start has been postponed for 24 hours – from Les Sables d’Olonne for the Mini Transat EuroChef. The ultimate finish line is off Saint-François (Guadeloupe), racing via Santa Cruz de la Palma (Canary Islands), where the first stage will finish. As before every big race, Tip & Shaft has garnered the opinions of a posse of experts to play the game of predictions: Tanguy Leglatin and Julien Pulvé, coaches of the Mini groups in Lorient and La Rochelle, François Jambou, who is the title holder of the protos who now coaches the 6.50 at Concarneau, the race director Denis Hugues, and David Raison, designer and former winner who have all answered the Tip & Shaft call.

The announcement of a cold front over the Bay of Biscay overnight from Sunday to Monday has meant a 24-hour postponement of the start of the Mini-Transat EuroChef. Faced with an unparalleled demand (137 files pre-registered), there will finally be 90 (instead of 84) starting, which will make this Mini-Transat the biggest in history.

“The pre-season races, in particular the Mini Fastnet and the Puru Challenge Race (ex-Transgascogne) were windy but the abandonment rate was low, which is a good sign”, analyzes Denis Hugues, once again doing the job as race director. “I hope everyone gets to the finish of their transatlantic race. As I always say: my favorite is the last one!” adds the irrepressible boss of the fleet, who cautiously steps into the ring for the game of predictions.

Bouroullec and Le Roy at the top

Like all the experts interviewed, Hugues first points to Tanguy Bouroullec who sets off on his Pogo Foiler, renamed Tollec MP, for the second consecutive edition. Launched late two years ago, the Verdier proto, built and prep’d at the Structures family yard, finished 5th, but the machine is now properly developed. The proof: the skipper has won almost all the major races since 2020: Les Sables-Les Açores en Baie de Morlaix in 2020, Select 6.50, Mini in May and Mini Fastnet in 2021.

“Tanguy ticks a lot of boxes. He has the experience, a good feel for the boat and he is very comfortable in strategy,” analyzes Tanguy Leglatin. “His boat is now ready and he has a perfect understanding of it which is vital on the prototypes. You need to know how to look after the boat and to be consistent during the duration of a transatlantic race.”

Second name to return to the top of the pile is that of Pierre Le Roy who sails TeamWork, the last Raison design built (1019), a sistership of 865, double winner of the Mini – in 2019 with François Jambou and in 2017 with Ian Lipinski. A forecaster at Météo France in Lille, the skipper won the Puru Challenge Race this year. “That is really the race not to be missed in the calendar, the one you do after your summer works and the last before the Mini”, explains David Raison, himself winner of the Mini Transat in 2011.

“Like Tanguy, Pierre has the experience of a first Mini Transat (5th in series in 2019). He has a very good understanding of major weather systems. His boat has been beautifully prepared and is a contender for the podium”, adds Tanguy Leglatin. Julien Pulvé, also sees these two guys on the podium, with the advantage to Tanguy Bouroullec: “It promises a good tussle, but I think that Tanguy will have the psychological upper hand with his ability to be comfortable offshore. He will undoubtedly set the pace.”

The game is open to outsiders

Will the foilers have an advantage on the course? For François Jambou, it is on the classic weather pattern of the first stage that this architectural option, not on the Raison designs, can prove to be decisive: “On a transatlantic race you always increase the risk of breakage with the foils, but if there is a front to negotiate with flatter water behind and the boat is flying, it can make a lot before you arrive in the Canary Islands.”

And behind this duo? All our experts agree that the game is fairly open with several serious outsiders, such as the Russian Irina Gracheva (Path, Lombard 800 design), who is participating in her second Mini and has shown that she can win by triumphing on the Marie-Agnès Péron Trophy this year.

The same can be said about the Italian Fabio Muzzolini on his Lombard 945 plan (Tartine sans Beurre) the former boat of Axel Tréhin, 2nd in 2019), who also has the experience of a first transatlantic under his belt and has proven capable of good things (2nd in the Puru Challenge Race). The name of Sébastien Pébelier, ex-president of the Mini class is also mentioned for the podium, he sails Decosail, a Manuard design built in 2010, redone this year with a new coachroof. “It’s a boat that can go well VMG downwind on the second leg,” notes Tanguy Leglatin.

A real championship for series builders

With 65 competitors, the series category is once again the biggest. And behind the skippers ‘match, it’s a real constructors’ championship here. Three models are vying for victory: the Pogo 3, title holder (Verdier design, Structures yard, 19 competitors), the Maxi 650 (Raison design IDB Marine yard, 14 competitors against 5 in 2019) and the Vector 650 for which it is the first appearance in the series classification (Bertrand design, Fornaro site, 3 competitors).

“The match is certainly more open than in 2019. It is also big question on the docks in the race village, no one can really say who can win, a Maxi, a Vector or a Pogo 3,” noted Jean Lorre, president of the Mini class, in our podcast Pos. Report. “The Pogo 3 can still win, but they are no longer clear favourites like two years ago.”

The fact is that the Maxi 650 monopolized the podiums this year. The boats seem reliable and the lengthening of their keel chord has erased their initial twitchiness upwind. Hugo Dhallenne most often is at the top among our winning trio of our experts. He has won the Plastimo Lorient Mini, the Pornichet Select and the Mini in May on his Maxi YC St-Lunaire. Our experts also mention Romain Le Gall (Les Optiministes Tribord, another Maxi 650) and Quentin Riché (Race for Pure Ocean, Pogo 3), who both train in La Rochelle. “They have shown their ability to keep up with long races in the pre-season. They have both been working on their projects for two years and have experience,” comments Julien Pulvé.

“We are not immune to a surprise”

Launched in 2020, there will be only three Vector 650s at the start, but Alberto Riva (Ediliziacrobatica), winner of the Puru Challenge Race, seems an excellent flag bearer for the Bertrand design. “I don’t know him very well, but he obviously has a lot of talent,” suggests Tanguy Leglatin. “I would almost make him my favorite as he has demonstrated qualities of speed, positioning and strategy.”

Trained by Ambrogio Beccaria, who had crushed the competition in his Pogo 3 two years ago, Riva could complete an Italian double. For Denis Hugues, “he doesn’t necessarily have the best boat because it seems to load up more than the Maxi but he makes it work remarkably.”

Other sailors cited by our experts: Jean Marie Jézéquel on his Maxi 650 Fond Apro, Léo Debiesse (Pogo 3 Les Alphas), winner of the Marie-Agnès Péron Trophy, and also Anne-Claire Le Berre (Maxi 650 Rendez-vous Equilibre), who, after Olympic sailing and the design office management of Sam Davies’ Imoca Initiatives Cœur, is enjoying here own offshore racing and it seems to suit her well (3rd in the Puru Challenge Race).

And some might come out of the woods. “The Mini Transat is so different from anything raced in the pre-season that we are not immune to a surprise,” said Julien Pulvé. Tanguy Leglatin concurs: “80% of the fleet will discover the open ocean and the main driver out there to perform is to have fun. This is the key to being consistent in performance.”

Verdict from November 9 in Saint-François.