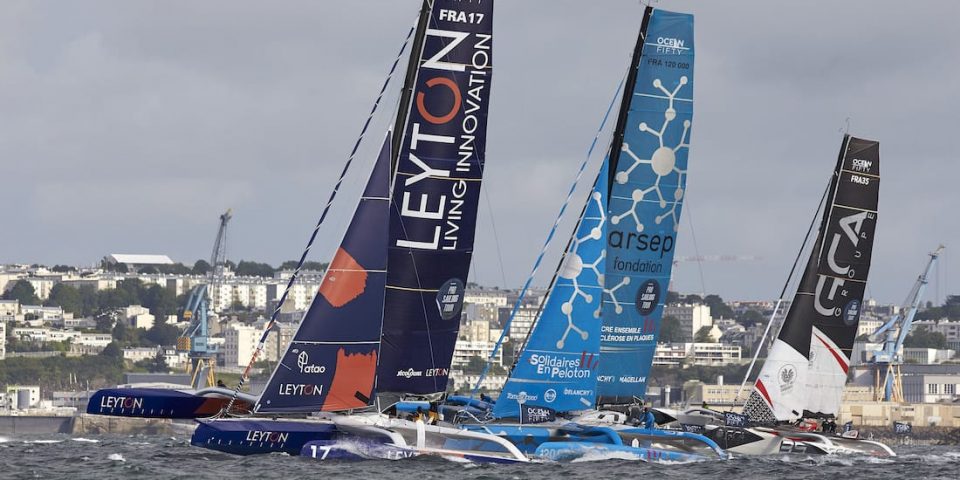 At the Sailorz Film Festival organised by Tip & Shaft, Julien Mauriat, one of the organisers of the Pro Sailing Tour, gave information about the second season, which will take place from May to July. Tip & Shaft can tell you more about the Ocean Fifty circuit which involves eight teams this year.

The first season of the Pro Sailing Tour back in 2021 held in Brest, La Rochelle, the Canaries and Toulon, brought together six and then seven teams (the project run by Armel Tripon and Benoît Marie arrived during the season), with in the end, an outcome unanimously considered satisfying by the skippers. “This is a great circuit, with a good rhythm for the season and a format which corresponds to our boats. This is close contact racing on offshore boats, so it is very exciting,” said a delighted Thibaut Vauchel-Camus (Solidaires en Peloton-Arsep). “The standard is very high and encourages everyone to take it up a notch. In terms of the racing, it is impressive,” confirmed Gilles Lamiré (Groupe GCA-1001 Sourires).

The organisers at Upswing Prod, who entered the world of offshore racing last year, were equally pleased: “We managed to launch this circuit in an extremely tricky context economically and in terms of the health crisis, where there were a lot of constraints to deal with, in particular concerning public access in the villages. In spite of everything, we wanted to organise a very high level competition with demanding performance standards,” explained Julien Mauriat, associate Director of Upswing Prod.

With his brother Edouard, a documentary film maker, he set up this Pro Sailing Tour as the subject of a documentary series, which is due to be shown in France in April on Canal + – the choice of channel has not yet been determined. “The economic model for the Pro Sailing Tour is above all centred on this series, the event is the focus,” confirmed Julien Mauriat. “It will also be available in 132 countries, in English and Spanish between April and June. We are looking forward to good viewing figures and the appreciation of the public.” The sailors, who saw the pre-launch projection of two episodes, were clearly delighted. Eric Péron, a newcomer to the class in 2022, confirms: “This documentary means we can promote our sport and that guarantees feedback. That’s a good argument to attract partners.”

The economic model for the Pro Sailing Tour is partly based on the sale of the series, with the production costs coming to 700,000 euros according to Julien Mauriat for an overall budget for the circuit “of just under 2 million euros, half of which is financed by local authorities, a bit by the broadcasters and private partners, with the rest being the capital investment.” The latter added: “This is a big investment for Upswing Prod, which has signed up for eight years with the class, but we know that when we set up an event, there is a time for investing. Since then, we were joined by Keneo, we needed a solid partner with a lot of expertise and the ability to finance this.”

Ensuring that the model becomes viable

Specialising in sports marketing and the organisation of sporting events (World handball championship in 2017, European volley championship in 2019…), Keneo joined Upswing Prod in late 2021. “We had been trying to invest in an event we would own,” explained Vincent de Bary, chairman of Keneo. “Firstly, because the models concerning profitability are not the same, and then because our hands are not tied as much, when we have the organisation rights, in comparison to events in which these rights are allotted by an international federation. We can innovate more, build it up with the skippers and move much closer to a real sporting show.”

The choice of sailing and the Pro Sailing Tour? “After two years of the pandemic, there were many events up for sale. We looked at other sports, cycling, ultra-trail, triathlon… We chose the Pro Sailing Tour for a fairly simple reason: before we arrived, Julien and Edouard Mauriat had invented something new bringing to these races the possibility of TV sports productions. That really won us over,” replied Vincent de Bary. Now they need to ensure the model becomes viable: “This is a huge investment for us, but we have the means and the time to ensure the event brings profits. We’re in it for seven years,” added the latter. “The aim is to develop this Pro Sailing Tour, to attract new people and partners. We are in particular looking for a headline partner offering 600,000 to 700,000 euros a year.”

This will be one of the key goals for the 2022 season. Julien Mauriat told us about the programme: “We wanted to turn the calendar around, starting in the Mediterranean and ending in the Channel, so that the boats would be free after 10th July to take part in the Drheam Cup, which is a qualifier for the Route du Rhum. We also turned the format around, as the inshore races will come before the 24-hour challenge.” The first episode will take place in Bonifacio, from 10th to 14th May, with the offshore race involving sailing around the island of Corsica. Episodes 2 and 3 will be held in Brest (21st-26th June) and then in Saint-Brieuc Bay (30th June-2nd July). There will then be an offshore race finishing in Cowes, where episode 4 will take place. To finish, on 6th July, the eight crews will line up at the start of the Final Rush from the Solent to finish in Roscoff around three days later.

A circuit attracting a lot of crewmen
from other backgrounds

In terms of racing, the competition looks to be of a high standard with an eighth team  led by Eric Péron, who has recovered and relaunched the former Prince de Bretagne. The ex-Figaro racer has a working budget for the season “of 500,000 to 700,000 euros depending on whether you include the depreciation of the boat, insurance and other costs. Thirty percent of this will come from partners within the French Touch Oceans Club and 70% from a headline partner,” he explained in February in our podcast Pos. Report. The partner was unveiled on Friday: it is the French company Komilfo.

“All of the boats competing in the 2022 Pro Sailing Tour are capable of winning. That is the magic of our class,” said a pleased Sébastien Rogues. He will be inviting Pierre Quiroga, the winner of the 2021 Solitaire du Figaro, aboard Primonial. The circuit is attracting many crewmen from different backgrounds. “I have received a lot of applications and I had to make some choices,” confirmed Quentin Vlamynck (Arkema 4), who in particular will be taking aboard Lalou Roucayrol, Alex Pella (in the Corsican event) and Pierre-Antoine Morvan.

Among the other crews, Erwan Le Roux has called upon the services of Yann Eliès, Pablo Santurde and Mathilde Geron; Vincent Riou and Hugo Dhallenne will be alongside Thibaut Vauchel-Camus. As for Armel Tripon, alongside his usual crewmen (Vincent Barnaudeau and Fred Moreau), he will welcome Matéo Lavauzelle and Gurvan Bontemps. The project for the skipper from Nantes initially began with Benoît Marie, who is not expected to be part of the crew this year – “Discussions are underway,” Benoît Marie told us. Tripon will be lining up on Les Ptis Doudous for the Route du Rhum, which he won last time around.

Once the Pro Sailing Tour is over, the Route du Rhum will be the centre of attention for the eight skippers registered for this second season, which is a great way to prepare for the major race at the end of the year, as was the case last season with the Transat Jacques Vabre. “In 2021, the teams pushed the men and the boats hard, but in the end, everyone made a lot of progress,” explained Julien Mauriat. “All of the sailors said that after the Jacques Vabre: if they all finished close together, it was thanks to the way the circuit is structured, as this allowed them to get in a lot of sailing beforehand.”