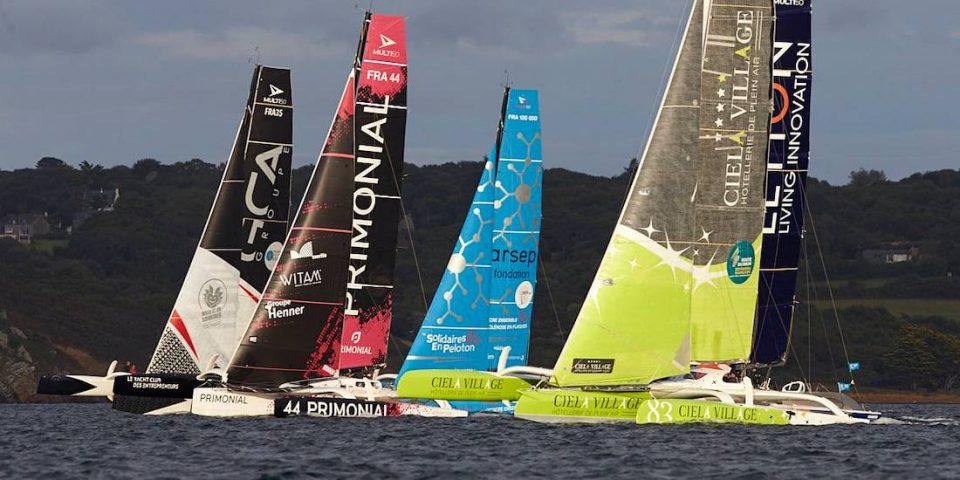 With two new builds last year, Arkema 4 and Planet Warriors, the return to the circuit in the spring of the former Ciela Village, bought by Leyton, the Multi50 class will offer a line-up of six or seven trimarans this season. The official programme will be unveiled on 16th March with a new look to the race format, new partners and some new locations. Tip & Shaft looks at what is going on.

The Multi50 did not do much racing in 2020. With the cancellation of the Transat CIC and the Quebec-Saint-Malo, the calendar was cut to two Grands Prix events (Brest and Saint Brieuc) and the Dhream Cup with three entrants, because of the Covid crisis. The skippers made the most of their boats to carry out PR operations.

Primonial (Sébastien Rogues) and GCA 1001 sourires (Gilles Lamiré) organised major tours, as did Solidaires en Peloton-Arsep: “With six to eight guests and when the weather was favourable with four or five trips, you can organise some fantastic days and share your sport with a lot of people while ensuring everyone’s safety,” explained Thibaut Vauchel-Camus, who toured all the way around France from Boulogne-sur-Mer to Monaco.

Relaunched ten days ago, the VPLP design which won the Dhream Cup and has clocked up 50,000 miles, will be fitted with a new mast in the spring.

As for the yards, the big news is the launch of two new boats. At the age of 56 after working as an entrepreneur and racing all sorts of boats (Formula 40, Orma, Multi50, …) Fabrice Cahierc had a VPLP designed boat built at Persico. He hopes she will be lighter than Ciela Village and Solidaires en Peloton-Arsep.

“We worked on the structure, the sides of the hull, the weave of cloth to limit the level of resin in the infusion,” explained the owner, who will race in the Transat Jacques Vabre with Thierry Duprey du Vorsent, his boat captain.

The project got behind schedule after her launch last August with the foil housing having to be rebuilt to ensure they were totally watertight. Planet Warriors, whose name comes from Fabrice Cahierc’s foundation, will be relaunched in Marseille on 4th March and delivered to the Atlantic, where she will make her racing debut.

As for Arkema 4, which is due to head for the Canaries to train, she has remained in Médoc since her launch in mid-September. Lalou Roucayrol, who will assist Quentin Vlamynck on the Neyhousser design for the Transat Jacques Vabre, explains: “We have however managed to do around forty days of sailing. These two months enabled us to identify some teething problems, which meant she was hard to control above thirty knots, because of the central rudder, the stock of which was too flexible.” A new appendage is being built.

Lalou Multi is looking for a buyer for the former Leyton

Lalou Multi also got back with his Noir Désir (ex Arkema 3) in the water after her charter to Leyton for the 2020 season. Still doing well, the winner of the Brest Grand in 2020, skippered by Arthur Le Vaillant, the Multi50 is now up for sale for 850,000 euros excluding tax or for charter (250,000 euros). In addition to that cost you need to factor in 80,000 euros for the insurance and practically as much for a set of new sails. Lalou Multi says they have had some serious contacts, which could mean a seventh competitor in the Transat Jacques Vabre.

Leyton, who used the boat for a year, decided in the end to acquire Ciela Village in late December at the cost of 1.5 million euros. They have given the helm to Sam Goodchild, who has replaced Arthur Le Vaillant until the 2022 Rhum. “Looking ahead to the Transat Jacques Vabre and the Route du Rhum, she is a boat that is more suitable than Noir Désir, as better protected and more stable in heavy seas,” explained the British sailor.

Thierry Bouchard’s former VPLP designed boat will be relaunched in March. “It was important to do it fairly early on so we could get used to her,” added Sam Goodchild. She will have been through a two-month long refit. “The boat had a tricky start and collided with a trawler in late 2017,” explained Aymeric Chappellier, who has replaced Thierry Braud as project manager. “We completely dismantled her at the Multipôle yard in Saint-Philibert, carried out al the checks, reduced her weight and started working with Madintec on a new autopilot.”

Some new projects are set to join the circuit in 2022. While Drekan, recovered by Eric Defert after her capsize in the 2017 Transat Jacques Vabre, has left the stage and will be used for charter in the Bahamas, the former Prince de Bretagne has been sold by Gilles Lamiré. Eric Péron, backed by a group of investors, has bought the Irens-Cabaret designed boat launched in 2009, which won the 2014 Route du Rhum when skippered by Lionel Lemonchois.

“This year, I’ll be focusing on the Figaro season and the Transat Jacques Vabre in Class40 (with Jean Galfione). If at the same time, we find the budget, the boat will be updated at Mer Agitée, with a central daggerboard, three rudders and one-design foils,” explained Eric Péron, whose main goal is the 2022 Route du Rhum.

With the same goal in mind, the construction of a new VPLP design using the moulds from Ciela Village is scheduled at CDK, even if, according to the assistant managing director of the yard, Yann Dollo, nothing has so far been signed: “There are a lot of estimates, lots of letters of intent. What is certain is that a Multi50 represents nine months of work. So to be ready for the Rhum sailing solo, a project needs to be up and running before the summer.”

If all these projects work out, there may be nine boats in the 2022 Rhum as opposed to six in 2018, which proves that the class is slowly but surely developing. This means that at the AGM in March, a rule of a limit to the number of boats may be proposed and voted on. “Given the state of play, it is worth thinking about limiting numbers ourselves before someone else does it for us,” confirmed Erwan Le Roux, the class president.

What would be the ideal limit that cannot be exceeded? “We are thinking that ten to twelve boats is a good goal. The line-up would be big enough to be able to organise some great events. Having said that, we will need to find the right licence system in order not to prevent new skippers from turning up in the circuit,” added the president, who is likely to continue in this post until 2022.

A championship 70% funded by private partners

Meanwhile, there will be six or seven boats in the circuit in 2021. Over the past few years, this circuit has tried to grow with special events and not only inshore racing. “Our model is the golden age of the Orma boats, and we can all remember the incredible 2013 Route des Princes,” commented Gilles Lamiré.

2021 is likely to mark a turning point in this area with a championship starting in May with a new format: “We will be announcing five key destinations on 16th March in the Atlantic and Mediterranean,” stated Erwan Le Roux. “We worked during the winter on this project in collaboration with the skippers and partners. We have the support of a new organiser, the Upswing Prod company and the circuit will be 70% funded by private partners and 30% by local public bodies. The idea is to sail in the heart of the cities, but also offshore.” The names of Brest, La Rochelle and Marseille have appeared as partner cities.