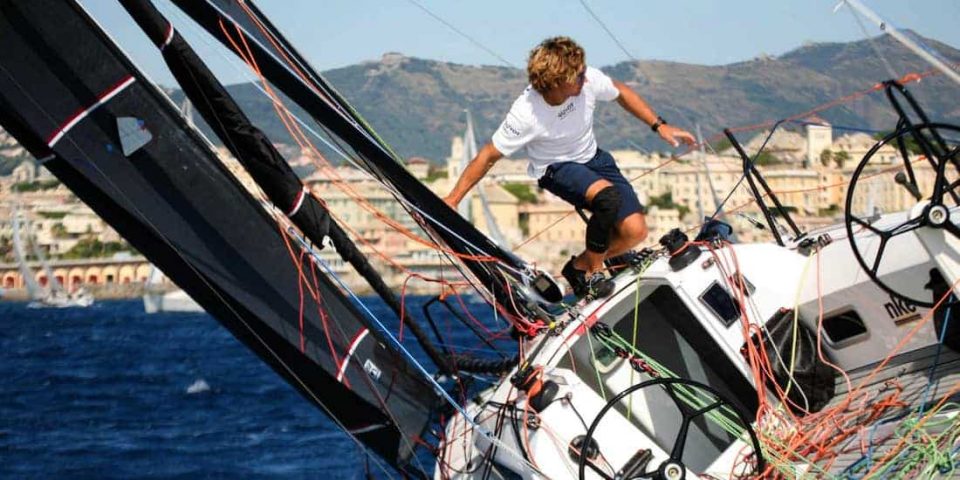 It is in December that the IOC are due to approve the Olympic sailing programme for the 2024 Paris Olympics, which was adopted by World Sailing two years ago. The programme includes the brand new mixed, double-handed offshore race, which, as the World Sailing Annual Conference starts, looks still under threat, especially if there is a change of president. Tip & Shaft finds out more.

The World Sailing 2020 Annual Meeting which was due to take place in Abu Dhabi, began last Thursday with a virtual meeting because of the Covid-19 pandemic. The big question is the election of the president with the previous one, the Dane, Kim Andersen, standing against three rivals the Uruguayan, Scott Perry, the Spaniard, Geraldo Seeliger and the Chinese representative, Quanhai Li. But many other subjects will be examined and voted on, in particular, the programme for the 2024 Olympics, adopted in 2018 by the International Federation. Nicolas Hénard, President of the French sailing federation, says the subject “remains under threat until it is approved by the International Olympic Committee, which is planned for December.”

Whether we are talking about what is happening within World Sailing or the IOC, the opponents to this programme, and particularly those against the new offshore mixed doubles race, have not had their final say. As for World Sailing, two submissions have been put forward (to be voted on by the Council) questioning the choices made back in 2018: Submission 36, put forward by the Czech federation proposes that if the Tokyo Games are postponed or cancelled, the programme scheduled for 2024 and 2028 should remain the same as the 2020 programme; Submission 37, made by the Hungarian, Serb, South Korean federations and the RS:X class (Olympic board until 2020, which is due to be replaced in Marseille by the iQFoil), requests that the programme adopted for 2024 be postponed until 2028.

All the experts that we talked to agree that these proposals, which will require at least 75% of the votes, are unlikely to be adopted. “When you look at what happened, there was a democratic process to get that through. That was made by council and ratified at the AGM and so to undo that at this stage I cannot see it. I am new to this game but I can’t see it. And so some of the people who voted for it would have to now be voting against it,” explained David Graham, CEO of World Sailing who was appointed last July.

On the other hand, what may well lead to this programme being overturned would be the election of a new president in place of Kim Andersen, who was behind this change. “It is not so much the proposals that worry me as the election,” confirmed someone inside the International Federation. “Opponents hope to get a new president elected, which could throw into question the programme adopted for 2024 by the IOC. Apart from the current president, the three others are ambiguous when asked about this matter. So it could go the wrong way if a new president cast doubts about the programme on offer to the IOC.”

In addition to that there is some internal pressure in the IOC, in particular from one of the vice-presidents, the representative from Singapore, Ser Miang NG (former vice-president of ISAF, the former name for World Sailing), who is not hiding his hostility to the offshore event, putting forward arguments about the costs. That may be taken up by some in the IOC in the current complicated context. “A lot of the world are under financial pressure brought on by the global pandemic and the IOC are not outside of that and so they are looking at ways of reducing complexity and reduce costs for Paris 2024” stressed David Graham.

The CEO of World Sailing is therefore attempting to show the IOC that the mixed double offshore race is neither complicated no expensive: “We are talking to them all the time about the entire slate and costs and complexity. Our team has done a wonderful paper for the IOC which shows that this slate is a more simple slate and most cost effective. The number of days are effectively reduced and offshore is relatively simple to run, once the boats are offshore they are offshore. So it is a fairly simple event to run.”

Feeling the threat grow, several supporters of the offshore race have got together in the association OffshoreDoubles.org, which has just been launched by the American businessman and sailor, Larry Rosenfeld, who told us: “Now is the time to show the Olympic committee that double-handed sailing has broad global support.”

Corinne Migraine, vice-president of the FFVoile and member of the advisory board for the association (with Loïck Peyron, Dee Caffari, Stan Honey, among others), made clear the objectives: “The idea is to bring together the community concerned by the double-handed offshore event to ensure good lasting coverage of this format to bring everyone together. It was important to launch this initiative at a point when the IOC decision is expected. There are worries and some traditionalists are scaring people, so it is up to us to show that this is an opportunity that is extremely beneficial for our sport and a sector that is growing in importance.” That was confirmed by David Graham: “It is effectively the fastest growing area of our sport. The ORC certificates that have been given this year, over one third of them are for double handed offshore.”

The coming weeks are going to be decisive for the future of Olympic offshore sailing. Nicolas Hénard insists on the economic consequences resulting from these choices: “The objective is to highlight sailing and to get the support of the general public behind an event that is easy to understand, well covered by the media thanks to strong broadcast and some famous champions… With the spotlight on this, it could generate a huge interest concerning the rights awarded by the IOC to international federations, as they are funded based on the media interest with categories going from A to E [The federations in category A are awarded the most, editor’s note]. Today, World Sailing is in category D, and if we could get to C, our life would change and it would give us the means to organise some great competitions, so it is a vicious circle. I don’t think that those who say we should return to Soling, Star or Finn racing understand what is at stake.” Verdict in two months from now.

Is the Figaro Bénéteau 3 definitely out? The boat for the next offshore double-handed racing event will also be examined at the AGM with a vote being held by the Council on submission 30 which defines the criteria: from 7 to 11 meters (which rules out the Mini 6.50), fixed keel, asymmetrical spinnaker and no foils (before, it was said “non-foiling boat”), so not the Figaro Bénéteau 3. That led an observer who has a good knowledge of the matter to say: “The Figaro boat has frightened people. It is a boat that is too technical for a circuit that is too professional.”