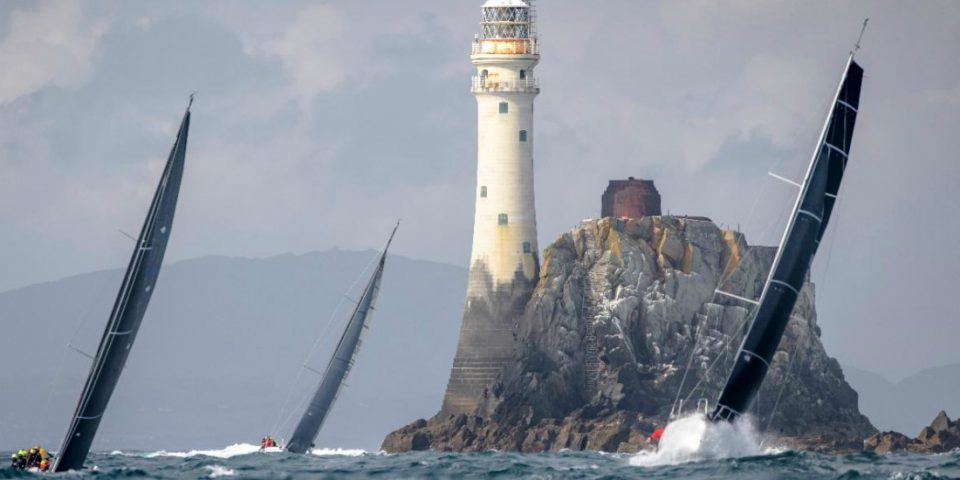 How Cherbourg won the Fastnet

Last Tuesday in London the RORC the longtime organisers of the Rolex Fastnet Race, dropped a bombshell to the assembled media. The 605 nautical mile biennial classic race around the famous Irish milestone will not finish in Plymouth, where it has since the first edition in 1926, but instead in 2021 and 2023 it will finish in the French port of Cherbourg.

Driven by RORC’s desire to accommodate more entries for the hugely popular race, that last edition of which sold out in five minutes, and to provide a better, more cohesive, collective, centralised experience for race finishers has been facilitated by a very comprehensive offer from Cherbourg which the RORC CEO Eddie Warden Owen told us: “It is a massive proposal which even the traditionalists can’t ignore. It gives us everything we need, something we just could not ignore. We can moor the boats in the centre of the city and there they have such enthusiasm and guarantee a real warmth of welcome.”

The news was greeted variously with anger, dismay and disappointment in the UK but also with some objective, positive comment, while on the other side of the Channel, in France, there was some satisfaction that the nation’s popularity and passion for offshore and ocean racing as well as commercial and financial firepower had underpinned another coup. Plymouth has now successively lost the starts of the Golden Globe, the Transat and now the Fastnet to Les Sables d’Olonne, Brest and now Cherbourg.

Owen told Tip & Shaft, ““This has been going on for a long time, in fact since I came into this post in 2008. There has been an issue with berthing ever as long as I have been involved. Ideally we would like to be in the heart of the city. Then it was a 300 boat race and even then we struggled. The demand then was such that the race sold out in 24 hours. Initially we took what we call the ‘pro’ boats out – the IMOCAs, the 100 footers and so on – and the record fleet then was 320 boats. But even then we still had 30 or so members who could not get in.”

He voiced his frustrations that negotiations with Plymouth had come to nothing,
” It has been something of a headache for a long time. What we have with Plymouth Yacht Haven is a long way from town. It is impossible for the public to have access to the fleet. Is it important to have the Plymouth public interested and engaged? I think so. You want to feel there is some support and enthusiasm locally and it has been impossible. They are just not interested. There have been issues and frustrations ongoing for a long time and we have invested huge amounts of energy trying to find solutions. We have been very respectful of Plymouth in the need to make changes. For them the big signposts were surely clear in losing the Golden Globe and then The Transat.”

That is an aspect that Jean-Louis Valentin, the president of the Communauté d’agglomération du Cotentin, is firm on delivering, “On the RORC’s part I think there was a desire to have a more festive and more popular finish than what was happening in Plymouth so far,” he told Tip & Shaft. Discussions between Cherbourg and English began two years ago. “Then the RORC were querying if Plymouth was still the most obvious finish port for the Fastnet Race, says Jean-Louis Valentin, “They asked us if we might be interested in the idea of  welcoming the race.” says the elected representative, “We want to strengthen the attractiveness of the Cotentin (the Cherbourg peninsula), and we want to consolidate the nautical sector highlight our maritime facilities and passion.There was an immediate consensus and interest here in attracting an international nautical event to the Cotentin. ”

The port has been strengthening its hand over recent years in terms of major sailing events, in 2018 hosting the finish of the Drheam Cup (it will be the race’s start port un 2020), but also in May 2019, the arrival of the l’Hermione (historic replica of 18th C French Concorde frigate).

Cherbourg is not the only port which was considered: Owen says other English finish ports were considered. “The reason we are where we are is that we first looked at different alternatives in the UK, coming back to Cowes basically would add in the headlands and tidal gates sailed on the way out and you could not see a little boat having an equal chance of winning.”On the frequently posed question of an additional possibly decisive tidal gate before the finish at Cherbourg he responded: “There is one similar at The Lizard.”

Cherbourg’s Port Chantereyne offers1600 berths but there is but there is also the outer harbor and, inside, the basin du Commerce which can accomodate boats with deep draft like Imoca Cherbourg has harbour facilities in the heart of the city with which Plymouth cannot compare.

Valentin would not be drawn on the size of the financial package offered, “I can’t reveal that for now, as I want to leave that for the Council meeting. The details concerning the project will be revealed on 12th December. It involves a lot of money. I admit that, but it corresponds to the return we are expecting. It will also be divided up more or less evenly between the Region, the town, the department and the Metropolitan authority. We hope too that we will be able to attract some private sponsorship after discussions with the headline partner, Rolex.”

Vendée Globe sailor Sam Davies a member of RORC who has raced the Fastnet regularly since she was a teenager expressed mixed emotions, “I have many memories of the finish in Plymouth, so in my mind, it’s hard to think it won’t be like that. However, on the other hand, in France, we are always welcomed like heroes in the towns. It’s completely different. So as far as that is concerned, I’m really pleased for the Fastnet Race, as that is going to be really great for the race and for the racers, including the English, who will be able to see for themselves the welcome they get in France. On top of that, I have memories of Cherbourg from the Drheam Cup last year, we got an incredible reception in the middle of the summer. I think it will be good for the race and make it better known.”

In England some reactions were less measured, invoking a certain hostility towards the decision (see certain reactions expressed in EuroSail News). Such disappointment was also shared from France by renowned owner-skipper Gery Trenteseaux, a member of the RORC and overall winner of the Fastnet 2015 (and IRC 2 this year): “I am someone who is quite conservative and traditional, I do not see the interest in his change which will complicate things tactically, with the traffic separation zones to be negotiated. For me is is like doing the Sydney-Hobart without going to Hobart. I think the English are too admiring of what the French have in ocean racing, and so maybe they want to copy. But in fact we, the French, like to drink beer in Cowes, go to the Squadron, go around the Fastnet and finish in Plymouth to bring back tea and ginger cakes. “

At the city council in Plymouth this move is seen as one for purely commercial reasons. Their statement expressed their “disappointment” after the announcement made on Tuesday. A spokeswoman told Tip & Shaft: “We became aware of RORC’s desire to grow the race and potentially move to France in August 2019. The leader of the Council has personally travelled to London to meet the commodore and the CEO of RORC to show at the highest level that we value the race and we met all their asks for the 2019 race (ranging from a free ferry across to the city, event support). In October we put out to tender for a feasibility study to develop the Mountbatten Centre, including additional 100 berths for the Fastnet and flexible events space to address RORC issues. It was clear there was a decision to be made about the heritage of the race versus its commercial success.”

For Mike Golding, also interviewed by Tip & Shaft, “It feels like another nail in the coffin of British offshore sailing. I think this has not pleased a lot of RORC members. But I can see there is no one actor causing this. On the part of Plymouth I think it is part of a general demise of our amenities, partly as a function of lack of willingness and partly because of austerity. They won’t invest despite having seen the loss of the Golden Globe Race and the Transat all going to France where these races are more respected and followed. When you consider austerity then Plymouth has surely suffered worst. In basic terms it is a long way from London and gets forgotten.”

Twice overall Fastnet winning navigator on Ran Racing, Steve Hayles said, “I am in two minds about much of it but when you read and listen to Eddie Warden Owen and the decision making process a great deal of what he says makes perfect sense. I have no issue with Plymouth but it’s not the reason I do the race and the views on offshore racing being embraced by the French, the port not being in private hands and the extra deep water spaces it’s hard to argue against. It is nonsense about more tidal gates is just unresearched and having won and lost the race by small margins I know with certainty than the last 50 miles of the existing course can totally dictate your result. Some of it doesn’t ring true with me and the larger and faster yachts will still probably ‘turn and burn’ at the end of the race as there is often logistical reasons for them to do so. The Royal Ocean Racing Club has made it clear it may not be forever but if it puts 500 boats on the start line and we race 90% of the same iconic course plus add a new challenge at the end then I can say that I am still in 100%.”