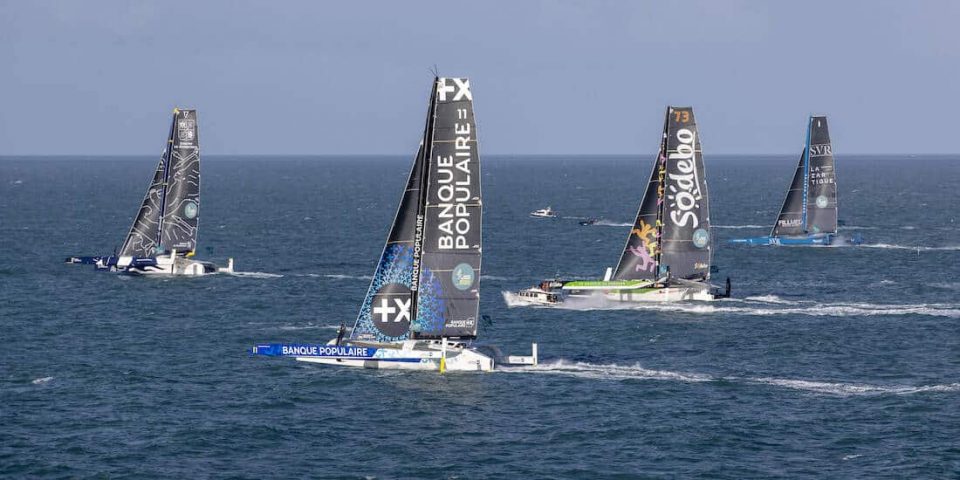 The Route du Rhum viewed by the routers

The 12th edition of the Route du Rhum-Destination Guadeloupe started on Wednesday at 2:15 p.m., and there has been no shortage of twists in the first 24 hours, some of them very cruel such as the abandonment of Sam Goodchild from the Ocean Fifty class, the U-turn of Armel Le Cléac’ h in Ultim, a class in which Charles Caudrelier is under the threat of a 4 hour penalty. Tip & Shaft brought together two weather routing specialists, Dominic Vittet and Christian Dumard – who are respectively part of the routing cells of Yves Le Blevec and Francis Joyon in Ultim – to discuss the weather scenario at the start of the race.

Postponed from Sunday to Wednesday, the start of the Route du Rhum-Destination Guadeloupe was upwind with tacks to be made in the Channel and a first choice to be made after getting out of  the Channel was which way to go. Looking at most trajectories it was almost unanimous to go for the southern route rather than going west.

“Everyone has the same thoughts more or less, namely that the fastest course sent us west to cross fronts and come down behind in a northwesterly sprint, but these fronts were going to be very violent, with 45 knots steady and that means gusts of 55-60. It wasn’t reasonable in these conditions to go due west, even if it’s always a little mentally challenging to tell yourself that you’re choosing a route that, theoretically, will take 12 hours longer”, explains Dominic Vittet.

“The skippers manage a compromise between the fastest route on paper, but one that is dangerous and potentially damaging, and a longer but safer route”, adds Christian Dumard. Under these conditions, a form of logic was followed by the Ultims, with the favorites making the early pace, namely Charles Caudrelier ahead of Armel Le Cléac’h, François Gabart and Thomas Coville. But the classification was quickly turned upside down after 24 hours of racing when Armel Le Cléac’h, who some would say is cursed on the Route du Rhum, turned towards Lorient following the breakage of his daggerboard.

A penalty that can be expensive

As for Charles Caudrelier, he is under a four-hour penalty for having jumped the starting line too early – like 16 other competitors -, a penalty he is supposed to do within 48 hours of the start. The Gitana team are contesting this decision but it will be necessary to wait for the full analysis by the race committee. If the premature start is confirmed, a meeting of the jury would agree or not the penalty, may be Friday, in this case, the time limit for applying the penalty would be extended. If that happens it would still likely upset the ranking.

“It’s not easy to choose the timing of the penalty because there isn’t really a very light period expected on the routing and 4 hours at 25-30 knots on average, well, that’s 100-120 miles,”  analyzes Christian Dumard, “We saw that in Rhum Multi, some who also jumped the start played really well, they made their penalty by Cap Fréhel when things weren’t progressing much because of the contrary current, that allowed them not to lose too much ground. For Gitana, if the penalty is confirmed, it will have to be done at some point and it will inevitably be expensive, especially since the scenario will be much more favorable to those who will be out in front.”

The rest of the program for the Ultims? The passage of the first front in the night from Thursday to Friday, in about 25-30 knots of southerly wind (gusts up to 35-40), before possibly a second 15-20 hours later (image below). “The question that arises is whether it is possible to go find the trade winds further south after the first front or if we first have to cross a second front. For the moment, I would lean more towards the second solution, the objective will then be to cut the junction with the trade wind. Some routings pass north of the Azores anticyclone, the idea is rather to go find the trade wind south of the anticyclone“, analyzes Dumard Francis Joyon’s router

For Dominic Vittet, the weather situation is still quite uncertain: “Behind the first front nothing is very straightforward because the Azores anticyclone is being battered by fairly virulent depressions which continue to circulate in the north. And that prevents it from going up. We see that from time to time a ridge which tries to go up, but it gets a slap and is forced to retract, which is complicated because we have to catch this ridge. It makes the race interesting, we will have to read the situation well, we are very focused on the subject.”

One thing is certain: the Ultims (and the rest of the fleet) still have a few days to go upwind hitting the trade winds. “We will definitely be getting into downwind conditions, probably south of the Azores, on Saturday, we won’t have done much downwind until then”, predicts Dominic Vittet. He still doubts the final elapsed race time which was announced at the start at around six days for the fastest. “We’re tacking and that is going to be the case until tomorrow evening, and when we find ourselves in the trade winds, there won’t necessarily be a favorable angle, not to mention that getting around Guadeloupe could be complicated, I’m not sure the conditions are ideal for a very fast time.”

Christian Dumard is more confident: “I always see a fast race, around 6 days, the first boats will arrive in Guadeloupe with a very easterly trade wind, they will make a big tack on port. On the other hand, behind, it seems to be turning east-north-east, which means more tacks to be taken, the situation seems to me very favorable for those who will be in front. That’s why the miles lost now will be expensive.”

The weather situation is, according to our two experts, fairly close for the entire fleet, with no real big southerly route on the program this year, but a passage closer to the great circle. Dominic Vittet notes in passing the good work of the Ocean Fifty which, for the first, compete at this start of the race with the slower Ultims, like Idec Sport and Mieux. “As they are much more agile, it’s much easier in upwind conditions to manage the wind shifts by just tacking; for the Ultims, the maneuvers are so heavy that you don’t engage as often. It is on the long legs without maneuvers that these make the difference.”

For the Ocean Fifty as for the Imoca, the complexity of the next few days will be, according to Christian Dumard, to manage “the zone of calms with winds a little in all directions which settles from Saturday between the two fronts, it could even concern the latest Ultims, with a risk of a large rubber band.” Clearly, this Route du Rhum does not promise to be one of returns from behind…

Already ABDS. After 24 hours of racing, Sam Goodchild in Ocean Fifty (injury), Antoine Magré in Class40 (collision with rocks), Oren Nataf in Rhum Multi (torn mainsail), Kojiro Shiraishi in Imoca (collision with the Oliver Heer‘s boat, who returned to Saint-Malo, from where Nicolas Rouger left); in addition, Romain Pilliard (Ultim) is on a technical stopover in Roscoff, just like Etienne Hochédé (Rhum Multi), Mikaël Mergui (Class40) is in Brest, Martin Louchart has made a U-turn towards Saint-Malo where are still two other Class40 skippers, Geoffrey Mataczynski and Sacha Daunar, as well as Jean-Sébastien Biard in Rhum Mono.