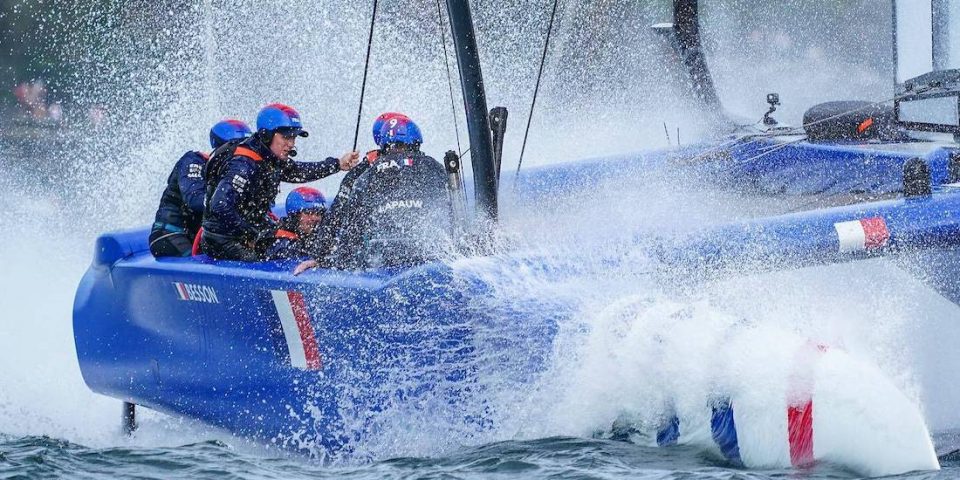 Matthieu Vandame: “Hitting for the podium must be a habit”

French ace Matthieu Vandame has been a multihull specialist since childhood. This season he is racing as a grinder with the French SailGP team, which returns to England next weekend, July 17 and 18 in Plymouth. He also sails alongside Thomas Coville on Sodebo Ultim 3, so these are two very good reasons for Tip & Shaft to talk to the 39-year-old.

Matthieu what conclusions did you draw from the first two events of Season 2 of Sail GP, those Bermuda (3rd) then in Taranto (7th)?
Bermuda was quite a pleasant surprise. We had decided to change a lot of things by changing roles for the in the maneuvers to help out François Morvan a little (the flight controller), it worked quite well, we are really starting to match up to the levels of the others in terms of handling the boat. In Taranto, we had worked on the few maneuvers that we did not really have perfected in our playbook, such as the gybe set and the roll and tack (rolling up at the buoy in the wind and turning directly), so we now have pretty much mastered all these things. On the other hand, we realized that we had not really prepared enough in terms of pre-start set up and plays for the course itself and so as soon as we were in difficulty, it got a bit fraught on on board, hence the poorer results.

Do you consider the F50s very difficult to master?
They are really very specific, they are unlike any other boats, to control the boat, you only use small knobs and buttons, it is only a question of operating logically, you have to combine together smartly and efficiently, as everyone presses buttons at the same time during the 15-20 seconds of a maneuver and still a few boats are sharper in terms of coordination. If there is anything in sailing that is coming closer to Formula 1, it would really be SailGP, it’s completely different there are so many settings, options …

Yet you are only allowed very little training, so how do you go about learning all these things and improving?
This is true, but one thing that is super well done at SailGP is that all data from all boats are shared. As there is loads of data output, there are more than 1000 parameters on the boat, so you can know and learn everything about everything. But of course the difficulty is precisely knowing what to watch. And understanding the data, obviously you don’t have the reasoning behind all of these actions and numbers, it is learning what and why things are better and faster. After that, you don’t necessarily have to just copy everything, but we all take a lot of inspiration and ideas from others.

You have sailed on a lot of different foiling boats is the adrenaline level here much more?
The peculiarity of this boat is that it goes extremely fast, but in the end, when you reach 50 knots, you don’t take the time to enjoy it, because you know that at this speed, the most important things is not doing anything stupid. You have to be extremely focused on what you are doing and not ask yourself too many questions because you could scare yourself! And if you start thinking about something else, lose focus momentarily, you can miss the half a second that can have dramatic consequences. So it requires extreme concentration, but it’s the same when you’re sailing an Ultim at 45 knots in the middle of the night in difficult sea conditions!

You changed jobs this year, since you had to give up your spot as a wing trimmer to Leigh McMillan to become a grinder and sail trimmer before, why?
Last year after the stage in Sydney (the only race before the cancellation of the season), where we had a poor performance, Russell (Coutts, CEO of the circuit) suggested to Billy (Besson) to change things. Billy then explained to me that I needed to change roles to bring in someone with more experience and a different point of view.

How did you take that idea?
It’s never easy because in terms of the job I was doing, they had nothing to complain about: the problems in Sydney were due to a collision, a start where we got shut out a break and a job sheet break, there was not much attributable to the wing. As I say with all the data we have, if I had done anything which was not so good with the wing trim it would have been obvious. But really there was big push from Russell to change something. Billy was pissed off, he wanted me to stay in the same role. For my part, either I was leaving the team, when I had been a bit fed up with Billy, or I carried on. I chose to accept becoming a grinder, and once I accepted, the idea for me was to move the team forward, I wasn’t going to upset the mood otherwise and especially as Leigh really is a super competent and good, friendly, experienced guy.

Does that mean that the teams come under pressure from Russell?
Yes it does but you have to consider that is normal. This is a circuit that largely works with funds from Larry Ellison, who Russell is representing and he runs it, it is his circuit. But Russell is an extremely gifted guy who has put together a lot of winning projects and he has a a real vision. The project where I had the most fun, where I gave myself 200%, was the America’s Cup with Groupama Team France. However, we know very well that a Cup project in France is complicated. So SailGP allows us French guys to participate in a circuit at an incredible level, on a very level playing field against the biggest names in the world. This year you will see that we have picked up a few big names that have so far been missing from the circuit, the Spithills and Burlings of this world… all the stars of the America’s Cup are here, it is an exceptional project.

What goals have you set for the rest of the season?
The main idea is to be hitting always for the podium, all year round. I think we can just as we did in Bermuda. Now hitting for the podium has to become a habit. We know that when it comes to maneuvering, we have now almost have all the cards in our hand, we still have some flaws in the racing part, we hope to do be better in Plymouth.

In between the SailGP Grands Prix, you are sailing with Thomas Coville on Sodebo Ultim 3, how did you get in to the oceanic stuff?
Thomas called me in 2018 to do the Nice UltiMed, he wanted to integrate people who sailed on foiling boats. In fact then I spent my first night at sea on the old boat, then discovered Sodebo Ultim 3 the next year, it is really a particular boat with the living cell near the front, there are plenty of excellent ideas in terms of the centre of gravity, the aero side, which we now see on other boats.

And how do you like it ?
Yes of course, the exciting thing about the Ultims is that they are boats which are developing all the time. This year for example, new rudders are coming in, they have cut the back of the boards, there is a new set of sails, new foils next winter, you spend your time changing and optimising and learning a lot of things that are evolving from a season to season. If Thomas asks me a question about a foil, I can spend whole days thinking about it, trying to find ideas and solutions, it’s kind of the same approach I had with Franck (Cammas). When you are in a teams like this with design offices and engineers, you can ask lots of questions about what you think, what you feel, you can bring forward ideas and comments, it all helps develop your skills. And let’s be honest, we have have access to exceptional boats, great toys!

What do you retain from last winter’s Jules Verne Trophy which was halted halfway?
I really enjoyed it, because I really liked the group that Thomas had set up. And I liked all the questions we ask ourselves on board about flight height, trim, sail settings. These things are ongoing, every minute, every hour, every day on the Jules Verne. Even with three days on the same tack or gybe in a straight line, the more you go on the more you fine-tune the little settings, you never settle, you are always looking for more. It is really stimulating.