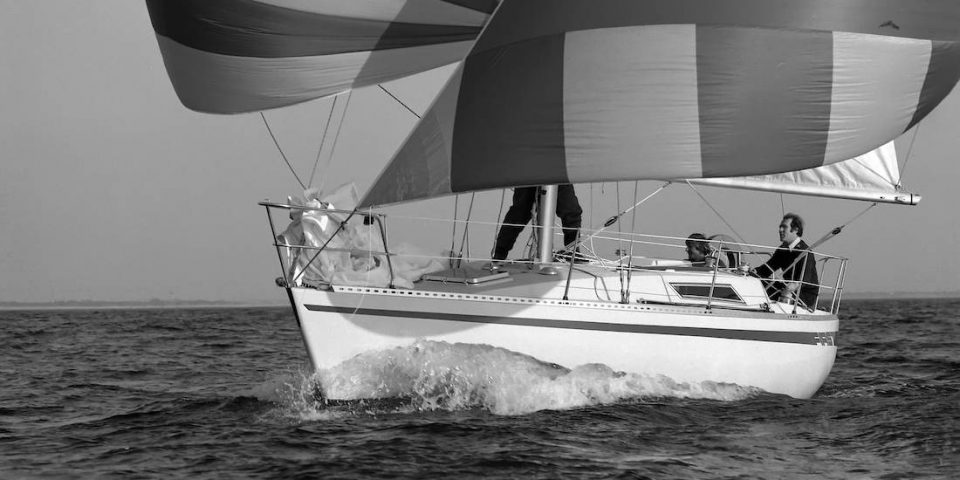 With more than 25,000 boats built since 1977, the First line this year celebrates its 45th anniversary and remains a benchmark in racer-cruisers. It is first and foremost a story that starts with a visionary. In 1976, François Chalain, who had just arrived in the Beneteau group, proposed to the company’s young president Annette Roux to buy the moulds of Impensable, winner of the 1973 Half Ton Cup. The Vendée yard made its switch from wood to polyester in the 1970s, but it only produced leisure fishing boats. Annette Roux readily admits: “Nobody was really waiting for us to go there…”

François Chalain did succeed in convincing her, and, with the designer André Mauric, he modified the keel of Impensable, lengthened the coachroof and equipped the boat with a more comfortable fit out. The right balance between racing and cruising has just been found. “François had the vision and above saw the need to bring all the elements of a boat together. He paved the way”, remembers Yann Masselot, current director of the Beneteau brand, when he talks about the designer who sadly died in 2007.

Called First, the 30-footer was presented in 1977 at the Paris Boat Show. It stays in the yard’s catalogue for five years they sell 824 units. And since then it has been followed by 70 different First models, from 14 to 53 feet, the latest being the First 36, a new design by Samuel Manuard launched this year. Also in the wings is the First 44 which will be presented at a world premiere at the Festival de la Plaisance in Cannes in September.

Through the popular Class 8 from 1982 and then three generations of Figaro (1990, 2003, 2019), the brand has a strong offering in one-design. But in saying that don’t forget that the yard has always been skilful in getting the best out of the current rules. The most fruitful era was undoubtedly that of the IOR rule in the 1980s, a line which brought together prototypes – the First Evolution – and production boats.

In the 2000s, the arrival of the IMS and especially the IRC gave birth to some specially successful production boats that could compete with the best prototypes. This is how First National, a First 40.7, won the Sydney Hobart, all classes combined, in 2003 and Gery Trentesaux won the Fastnet Race (in IRC 0) at the helm of his First 44.7 Courrier du Coeur in 2007. While Beneteau the world’s leading builder of leisure craft, has been able to take advantage of the strength of its international network, the entire history of the Firsts has shown a particular relationship between industry and craftsmanship.

At a time when the sales volumes of racer-cruiser sailboats has decreased, the yard has chosen carefully measured production lines. “In 2015, Madame Roux wanted to relaunch the First range,” says Yann Masselot. “So we joined Seascape in 2018 for their range of sportboats which was an accelerator. And there in Slovenia we produce the First 36. And for the First 44, we have returned to a dedicated workshop in Poiré-sur-Vie (Vendée).This is the right method, and the experience of the First 36 shows that the market is out there.”