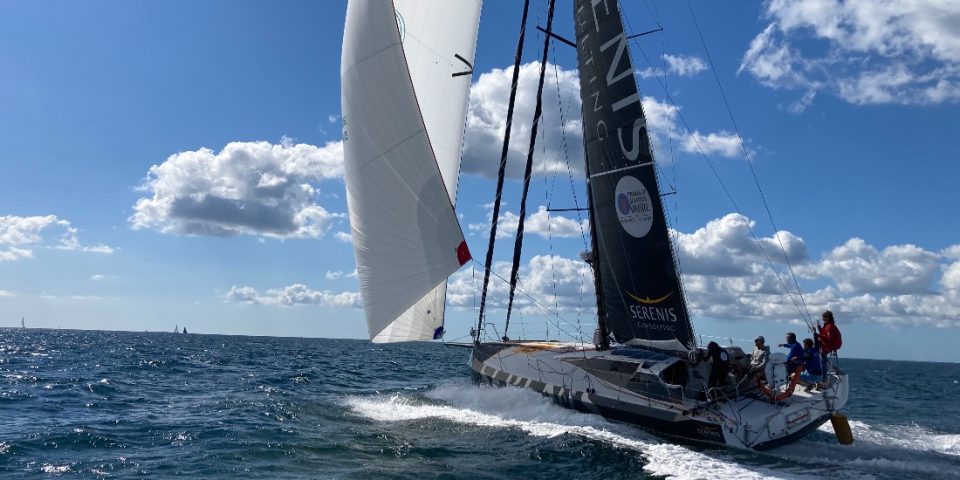 Racing is also a good vehicle to promote cruising. GlobeSailor the agency specializing in the charter of cruising yachts – using a search engine that allows real-time comparison of the rates offered by its network of 800 professional rental companies in 180 destinations – was created in Paris in 2008. And they have been quick to see the value between promoting in the racing market to build their yacht charter market. Now GlobeSailor has just opened a branch in Lorient, in the heart of Brittany Sailing Valley.

Since last year, the company founded by Olivier Albahary, has chosen to use offshore racers in their marketing, especially after noting that several of them had been using GlobeSailor: “We realized that we had more and more professional sailors among our customer base“, explains the CEO. “As examples we had Armel Le Cléac’h book a Dufour 390 Grand Large last summer with us, Jean-Pierre Dick a Sun Odyssey 449 , we also chartered boats to Charles Caudrelier, Paul Meilhat and others.”

To support a sustained growth running “from 30 to 50% each year”, according to Olivier Albahary, with an annual volume of reservations of 30 million euros and turnover of 5 million,  GlobeSailor is centring some of their communication strategy using sailors more accustomed to stacking than to the delights of a gentle cruise. “It  gives us more visibility, but it also engenders a measure of confidence and credibility showing that experienced and knowledgeable sailors use us.”

It is a marketing approach which makes more and more sense when the GlobeSailor team notes from their sales figures that there is an ongoing increase in the number of first timers, pointing to a growing enthusiasm for sailing in general: “In one year, we have gone from 22% skippered charters to almost 30% last summer, which shows that we have managed to attract a lot of newcomers. ” confirms Jean-François Allais, sales director.

The health crisis and the Vendée Globe have contributed: “The successive confinements have pushed more and more people to want to get on the water and to take an interest in cruising, especially as the health risks are significantly reduced if you rent a boat with family or friends,” adds Allais. “In addition, the Vendée Globe had very high media visibility, we really felt that more and more people became interested in sailing.”

An initiative was set up with Jean-Pierre Dick, who hosted a webinar with GlobeSailor last April, joined by 800 people, during which the past Vendée Globe racer gave his advice on navigation in his native Mediterranean. And very recently, a competition organized with French pole vaulter turned offshore racer Jean Galfione mustered 500 participants, three of them winning a day of sailing off Concarneau aboard the new PogoS4 Serenis Consulting, on which he will compete in the Transat Jacques Vabre with Eric Péron.

Once in Martinique, Jean Galfione will actually set off on a family cruise aboard a Nautitech 40 booked through GlobeSailor, he will then share his experience on his social networks, relayed by those of the agency. And he is not alone in his idea to go winter cruising, other competitors are doing the same thing: “We have other requests from skippers doing the Jacques Vabre, adds Olivier Albahary. They are tempted to extend their stay in the Caribbean by calling on our services!”