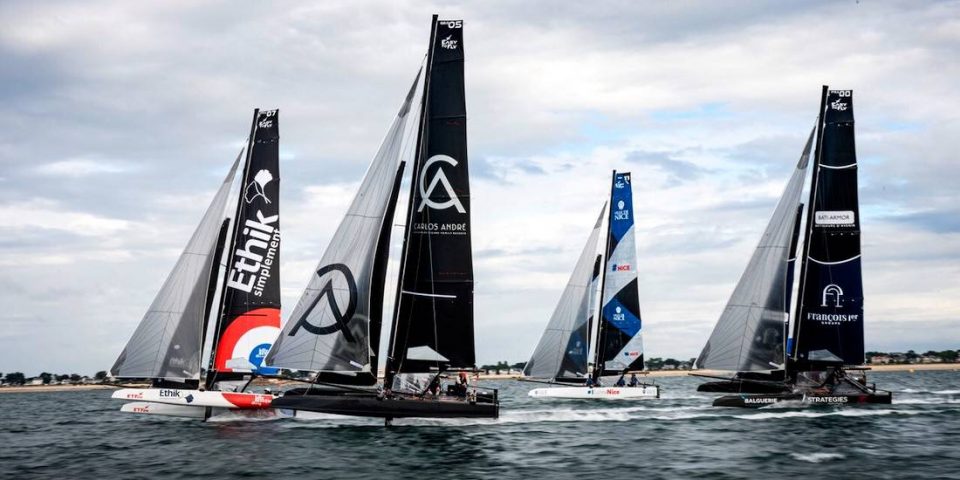 After winning the Transat Jacques Vabre for the fourth time in 2017, Jean-Pierre Dick did not stay ashore for long. The gentleman sailor launched the ETF Series in 2018, a circuit raced on ETF26 one-design foiling catamarans measuring 26.6 feet (8.10 metres). Designed by Guillaume Verdier, they are built at the Lorient yard run by Absolute Dreamer, the company belonging to the sailor who has taken part four times in the Vendée Globe.

While the ETF Series initially attracted owners/keen amateurs, the IECA (International ETF26 Class Association), created last year to manage the circuit, is today attempting to attract more pro teams. Arnaud Dorange, their president, stresses the fact that these offer “high standard racing with a dedicated class manager, technical assistance in each of the events and a communication package including social networks, photos, videos and tracking.”

For the fourth season (six events on the program), which starts on Easter weekend with the Spi Ouest-France, seven teams are so far registered and three boats are still available to buy (120-135,000€ excl tax) or to charter (33,000€ excl tax per year). What is the annual budget for a full season? “You need to think about around 80,000 euros excl tax for a young or amateur crew, 120,000 euros for a professional project,” replied Jean-Pierre Dick.

He added, “The ETF26s are extraordinary boats for PR operations. For example, the pro-am race scheduled for early September in Pornichet will be an opportunity to invite partners and guests to discover the excitement of flying at 25-30 knots alongside excellent sailors like Billy Besson, Jean-Christophe Mourniac and Yvan Bourgnon. That is what enabled us to attract new sponsors this year, like La Cour d’Orgères and Ultimate Fishing.”

For two years, several pro teams have taken part in the ETF Series. In 2019, while he was waiting for his foiling IMOCA to be built, Armel Tripon sailed an ETF26 in the colours of L’Occitane, and in particular won the Tour de Belle-Ile; in 2020, the boat was taken up by two skippers competing in the SailGP circuit: Billy Besson and Nicolai Sehested. They will be training together next week at the ENVSN national sailing school in Quiberon – the Dane’s Team Rockwool Racing is chartering two boats for this.

“The ETF26s have adopted the same philosophy as the F50s,” explained Billy Besson, winner of the circuit in 2020. Not only do they foil, but on top of that the way they are sailed with a helmsman, sail trimmer and foil trimmer, is fairly close to what we see in the SailGP. The format of the races is similar too, which means we can work on the start phases, which is an excellent way to train. The other advantage is that in terms of handling, the boat is simple and does not require many people to be launched.”

Winner of the ETF Series in 2020, the skipper of the France SailGP Team is back to defend his title this year at the head of the ABC Arbitrage and Les Entreprises du Morbihan team. The others taking part, apart from the Youth Foiling Team skippered by Charles Dorange and Jean-Christophe Mourniac’s Team Pro, are Swiss (Team Bourgnon), Danish (Cool Runnings and Team Rockwool Racing) and British (Toroa Racing Team). This goes to show how the series has opened up to foreign competitors with the aim of becoming truly international.