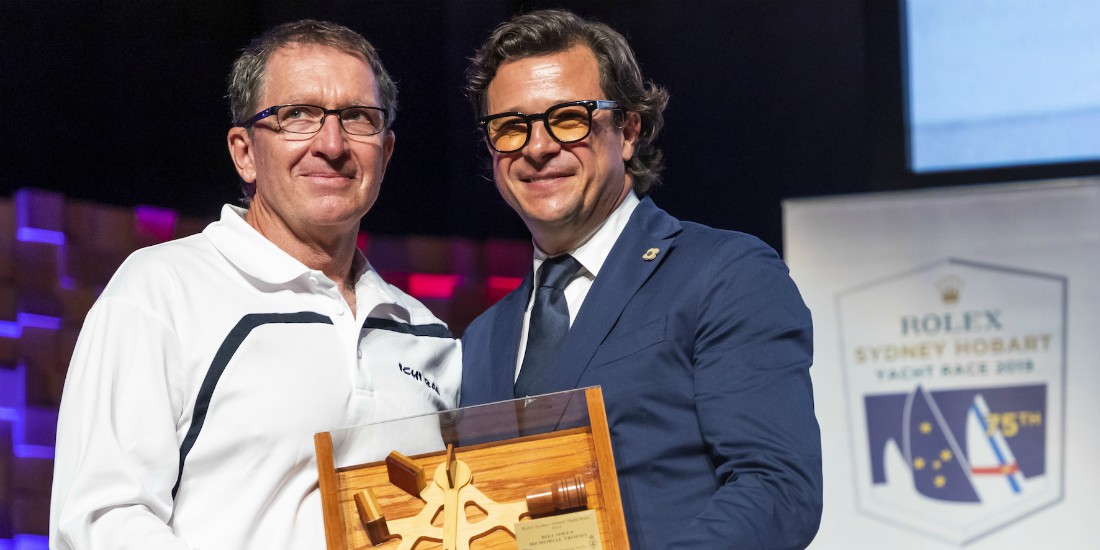 Will Oxley: “I’d like to be involved with at least one more Ocean Race”

Australian ace Will Oxley, 54, had a truly stellar 2019 as navigator contributing significantly to the unprecedented double on David and Peter Askew’s US flagged VO70 Wizard, victors on the RORC Caribbean 600 and then also the Fastnet Race which saw them crowned RORC Yacht of the Year. His season just finished on a high with his second overall Sydney Hobart win as navigator on the TP52 Ichi Ban, adding to their overall win in 2017. Oxley qualified and worked as a marine biologist between 1982 and 2000, studying the Great Barrier Reef in his native Australia before turning professional. He has sailed three Volvo Ocean Races since 2005 and confirms he is looking forwards to the new challenges of The Ocean Race in an IMOCA.

Winning the Sydney Hobart seems like the perfect end to an incredible season for you….
It feels a bit ridiculous in a way, but I really think I am just lucky to sail on some very good boats, that is what makes the difference really, sailing with people who are willing to put in the time and the effort and have really good crews. The results came for us.

Which results are you most proud of in terms of your role as navigator?
That is a difficult question. The Sydney Hobart and the Fastnet rank about equal as they were so very highly competitive fleets and both were very tricky in terms of navigation and weatherwise. So you had to throw out the playbook and wriggle through a couple of transitions, so that is where I feel I earned my money, luckily enough they both worked out. Both rank about equal.

What were the keys to the Hobart win this time?
We have to start by saying the boat (Ichi Ban) was incredibly well prepared with a really good crew. We had done 80% of the work before the race had started. That is a huge part of it. There were two key points. The first was the first of the transitions which was a stationary trough between two high pressure systems. You had to put yourself in the right position to cross that and you had to just cross it just the once. We knew the second key change would happen at around Tasman Island. We largely got them both right. We crossed the line perfectly just as sunset doing 19kts. That is a massive advantage to finish just before dark.

In terms of optimisation what has been done to Ichi Ban?
Ichi Ban is a Super Series hull but that is where it ends. The rig is a bit taller and the keel is a bit deeper. The rig is an offshore mast for the Sydney Hobart race. We can put three reefs in the main. We have FaRo electronics running Garmin displays, running Expedition and then we spent a lot of time with our KND Software working on our reaching. Of course in the Super Series there is no reaching. We have what is now defined by World Sailing as a ‘whisker pole’ so really a jib strut. And we spent a lot of time trying to get the right Zero. We are limited in the number of spinnakers we can carry it is pretty important to take the Zero we thought would work. So we had a very nice new J- Zero which was very helpful and with our jibs they are like the J1 is a J1.5, the J2 is a J2.5 and what we do the 1.5 is the cloth weight of a 2.5 and the 2 is the cloth weight of a three. That gives us a lot more range with the headsails because any time you are changing gear you are not going as fast. And we have all learned from the Volvo and are triple heading and that is very efficient. It is no secret. The boat is considerably faster than it was in 2017. We have a very competitive offshore 52 fleet in Australia here and that is why everyone is getting faster and faster.

Navigators are like wine, they seem to get better with age?
The weather and navigation is one of these things that as long as you keep your marbles and your fitness that you do get better at as experience builds. Experience counts, learning when to trust the models and when to trust yourself, you learn with experience. But that must mean I am close to falling off the cliff at the other side! (laughs)

But staying fit is vital to you….
I do spend a lot of time training when I am home. In Europe I always take the bike and it is good for your mental health as well as physically. And I like to see some of these lovely places we go otherwise you are head down the whole time.

And you work consistently well with Christian Dumard and have done for many years….
Christian and I have worked together at least since 2005. We’ve been through three Volvo campaigns. I like it with Christian because first and foremost he is a navigator not just a meteorologist. That means we can have the discussions about that side of it and he’s always just a very useful sounding board who is obviously very talented. He and I work together on most of these campaigns. What we get with Christian is we get something that is specific, tailored for us as opposed to the generalised forecast that we get from the other meteorologists, who are very good, but theirs is a generalised forecast. With Christian I just get someone who’s helping me make sure I don’t make mistakes and understanding the difficult bit. His real strength is the depth to which he thinks about it and worries about it and it’s the attention to detail that I like.

What are your thoughts on The Ocean Race itself and where it’s at?
The race is still trying to evolve I think the IMOCA 60’s are obviously the top end but what it really needs is more entries.

The IMOCAs appeal to you, I would imagine?
The best sailing I’ve done in my life has been on the IMOCA 60’s with the doublehanding to Brazil and around Britain and Ireland (Oxley was co-skipper with Brian Thompson in 2007 on Team Pindar before Thompson’s Vendée Globe). But more and more as you spend time as a navigator you get pigeon holed into being a navigator and I am a sailor as well. The IMOCA’s offer a chance to get back into more of the sailing so that part of it is very appealing. I’d like to feel I’m not yet done with round the world racing, I’d like to be involved with at least one more.

Are you expecting to find a role with a team?
I wouldn’t expect anything but I’m interested both from a shore side and an onboard side. It’s going to be a tough race and it may well be that a squad system is going to work best. We will just let it evolve this year. The other interesting thing is the great interest in the (Olympic offshore) double handing coming up in Paris and I’ve been surprised at the amount of interest shown in Australia by different people and that presents a real opportunity for people like Christian and myself to be involved, particularly shore side in sending these guys off with the full package. I can imagine we might be on opposite teams as we do wear different flags so that might be a problem there.

Our sport is making better progress now in terms of sustainability programmes?
No question, people are thinking more and more about sustainability. There’s the obvious big issues of the amount of air travel that we do and the production of the boats. I feel like there’s progress being made on the construction side and the chemicals and obviously the ability to recycle the carbon. So as long as we keep moving in the right direction. I hold onto things like when we had the global problem of CFC’s where the world actually got together and said ‘look this is a real problem’ and we stopped using CFC’s so there’s been a dramatic improvement and the ozone layer is repairing itself. There’s the potential, when the world gets together, that the great frustration is the obfuscation by various governments, Australia primary among them, of trying to argue the facts or pretend that they are doing more than they are. The crisis going on in Australia at the moment is touching nearly everybody and I think this has brought it forth to the consciousness again. This has happened before when Kevin Rudd was in power, we were in an El Niño cycle and there were incredible droughts and people were really worried about it but then it started raining again and people forgot about it. The things that are happening is as predicted by the scientists, some people are over egging the situation but this one is so clear that hopefully we’ll see some positive changes.

What is your view on the art and science of navigation, are we in danger of losing the fundamental basics and skills as technology advances and makes it more of a video game?
The age of navigators seems to be getting older and the skillsets are in danger of being lost while we are in this transition where children and young adults now we all have got a GPS that tells us where we are all the time and whether to turn left or right. So, there’s a set of basic skills that I think are at a danger of being lost. I would like to spend more time in the education side of navigation and help bring more navigators through. That was the primary motivation of my writing in the first place and I’d like to find more time to do that because I believe very strongly that someone that’s good at a computer doesn’t make them good as a navigator, there’s so much more to it. There’s a huge amount of effort that goes on behind the scenes for a navigator, you don’t just turn up to the boat. You have to have done all your research beforehand. That can be offputting for people because there’s a lot of work that you do in your own time, but the rewards are there. There’s not that many navigators around. You keep bumping into the same people. So anyone out there who wants to become a navigator, if you’ve got a head for numbers and you don’t mind being down below a lot of the time then it could be job for you.

Hervé Favre: “For The Transat CIC, we’re looking at the possibility of an event in the summer”
30 March 2020