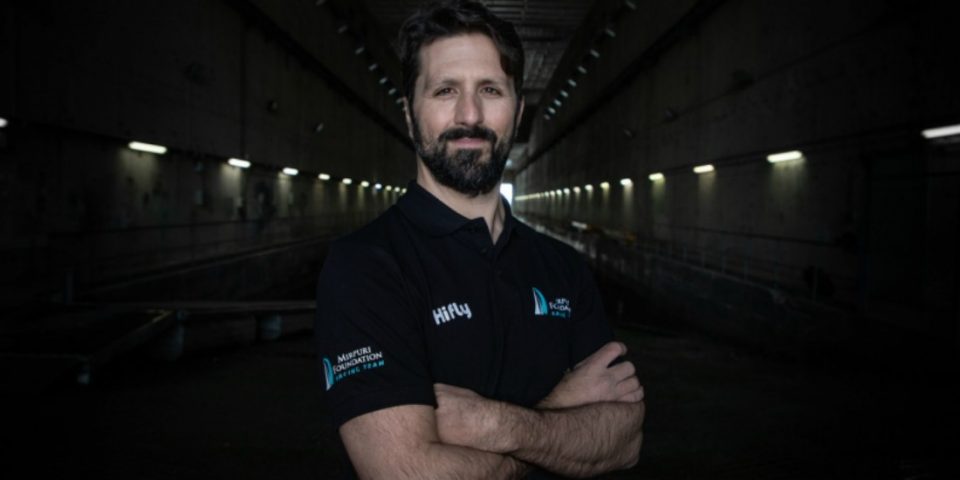 Yoann Richomme: “The Ocean Race ticked all the boxes for me”

As a very successful solo racer, singlehanded Route du Rhum winner and twice La Solitaire champion, Yoann Richomme might represent something of a surprise choice as skipper of the Mirpuri Foundation’s VO65 Racing for the Planet for The Ocean Race. But Richomme’s skillsets extend way beyond race winning strategies, immaculate boat preparation and sailing extremely fast. His early background was running team projects on the Tour Voile, he effortlessly mixes an affable laid back attitude to an acute technical mind, his rigorous preparation is renowned but along with that he is a thoroughly nice guy who, after missing out on Vendée Globe support for 2020, was certainly due a break. Tip & Shaft caught up with ‘Yoyo’ just before the hard work starts on a programme which is designed to be a race winner.

So how did you get involved with this, did you ask or were you asked?
Really it came out of the blue. I was contacted by Charles Caudrelier who is advising the owner of the team, Paulo. He asked me if I was interested. It was completely out of the blue. That was in September. We talked about it and I met Paulo and his team the week before the Jacques Vabre when I went down to Lisbon. I went that week then I got the answer at the end of the Jacques Vabre.

Is this (The Ocean Race) something you have always wanted to do?
Yes, I mean to be fair I wanted to do it but in no way did I think that they would take a French skipper for something like this. So I wasn’t even looking that way. I was still in my Vendee Globe campaign. But it was already looking pretty bad at that time. I hadn’t even really gotten my head back up and started to look at other things. The thing is I have always been passionate about this race. First of all, I come from a team background- I have played many team sports: rugby, basketball and other sports- not to an important or major level, but I have already had that team thing. And I have always loved crewed racing and being part of a team. But the thing is that in France the only way to make a living is to sail solo. So that is what I did and went for it. The crewed thing was always on my mind and I always thought that the Ocean Race was meant for me because I do really like the management side of teams. Here, I especially like the team size, the boat size and I like the close racing, the ocean racing. It ticked all the boxes for me. But to me it had looked impossible to get a spot as a skipper.

Would you only ever have gone as a skipper?
Probably not. Especially because my Vendée Globe was looking pretty ropey at the time, I was going to be looking into the Ocean Race quite soon. But fortunately the call came in early, at the right time I would say.

What is your background in crewed sailing?
Well, I kind of started with that because when I did my studies in Southampton we got a team together to do the Tour Voile and we did that four times. I was running the campaign and I was skippering the boat even though I wasn’t helming it. So we did that for four years and then I did quite a bit of match racing IRC racing and stuff like that for four more years and did more Tour Voiles because I think I have done eight of them. I did more Mumm 30 championships and other championships. All in all I was quite experienced with that and then I moved into solo racing. Even though I was doing solo I really felt that I would go back and do Spi Ouest and manage a crew on a 40 foot IRC boat at Spi Ouest. To be fair, I prefer crewed racing to solo racing. Im kind of bored of solo racing.

How would you describe your management style, it is a work in progress?
I mean, I guess I can’t say I have managed a team of twenty people but I have managed projects with quite a few people involved. I put a lot of trust in people which is what I intend to do on this one as well but I also really like things quite well planned and well organised- maybe not military style but quite strict obviously! However, I am also quite laid back, I don’t get stressed that easily and I try to have quite a regular, even emotional profile.

Is the idea that the whole project steps up from last time and is a team that can win?
Yes, obviously last time it was very different because it was very late and they were fully managed by the organisation whereas this time Paulo Mirpuri wants to set up a team to go and win it and so that is why he has given us so much time. The boat is already sailing, it’s ready to go, it has just been repainted and we are going to be sailing in about ten days now. That is a luxury I’ve not really been used to having, which is nice to have this time around because the criteria is based on age so the draft says that I need to recruit quite a few under thirty and under twenty-six.

How much of a crew do you have already?
I can’t disclose who but no one has been signed up, basically everyone is going to be recruited in 2020. I have two watch captains that are coming with me to try and set up and collect crew and then we are going to be testing maybe between ten and fifteen under 30 crew this year.

And Charles Caudrelier’s role?
It’s ongoing. He is basically just advising the campaign so it is easy for me to give him a call and ask you know, ‘what should I do?’, ‘how should I manage this?’, ‘how did you experience this?’,’what were the mistakes that were made?’, ‘what were the good things that were done?’. I have interviewed quite a few people from the Dongfeng team already and so I’d rather give feedback from those to the campaign and I’m trying to build on all of that experience

How many teams expected to race? Does it matter to you?
I have no idea but at this stage no. I know really early that most of the teams will only start in a year’s time and so I can’t be speculating about a year from now. Obviously I can see that a few of them are active already in the Ocean 65s but I’m guessing they are not fully financed for some of them. Things will change by even next year’s summer.

What is your ideal make up in terms of a team? What are you looking for?
Obviously you need a lot of drivers and trimmers, so everyone needs to be able to take on those roles. It’s a hard question because I have still never sailed on an Ocean 65 yet. I’m still trying to get my head around how to organise a crew on a boat like that so it is a hard one to answer. I am definitely coming from an allround background, I am looking for people that are quite allround but obviously I’m going to be looking for people who know how and want to make a boat go fast.

Is there any specifications in terms of nationality or can you pick and choose?
I don’t have any constraints. I can look anywhere that I want.

Will you do any of your own sailing?
I will be looking into doing some other sailing but it might be quite hard to fit in. I have some commitments towards the campaign that I can’t discuss we will see. I am looking at doing other stuff. If I could find a few days and maybe go racing with a few of the sailors who are trying then I will try to fit that into the programme for sure.

And this is perfect in terms of experience and profile building leading up to the Vendée in 2024 being able to get a crewed round the world under your belt?
Yeah, exactly. It still works for the next Vendee, it still works for the next Route du Rhum.  Obviously those objectives are a bit far away now but I have put so much work into my 2020 Vendee Globe campaign and got in touch with so many people that of course I am going to have that in the back of my head, with a few sponsors hopefully keeping that in the back of their head to that if they decide to go for the next Vendee Globe they know I’m available.

What’s your thoughts on IMOCA in The Ocean Race?
It is a good choice to be changing the class of boats. Obviously the IMOCAs are very different: a lot more exciting, a lot more technological. They are a whole other challenge and I think. I don’t know how many boats there will get on the line so I don’t think we will know for quite a while. For sure, the possible build slots will be running out quite soon I think but then there are so many IMOCAs now it is hard to know who’s going to show up next year and start a campaign or in April or May next year. After the Vendée Globe they may want to go and do The Ocean Race after that.

The VO 65 makes sense from an economical sense compared with the IMOCA?
I think so, it makes a lot of sense. I think it’s a good bet on our side, that we will get some really good, really close racing in the 65 and that is why I have agreed to go in that category as well.

So you will be sailing in ten days time?
Yes! Basically we are running what we call a ‘discovery session’, it is a discovery session for me. I’m bringing a few experienced sailors on the boat to try and get it set up, make sure the electronics are working all calibrated and fine, looking at all the sails and the mast trims and basically they will be teaching me how to sail a 65, so we will be spending three or four days in Cascais doing that and I’m going to be meeting a few people as well towards setting up the team because we are going to be looking for a few people to run the programme this year.

What do the family think about the whole idea?
They are really keen on doing it. It’s something we have all been waiting for quite a while, I’ve been asking to get a fully financed and professional programme running so this is my chance. They know I’m up to the job and know I’m probably experienced enough now to run such a programme but we can’t wait to get started. We are really happy that the news is out because it is a bit of a weight off our shoulders already but now the real challenge starts