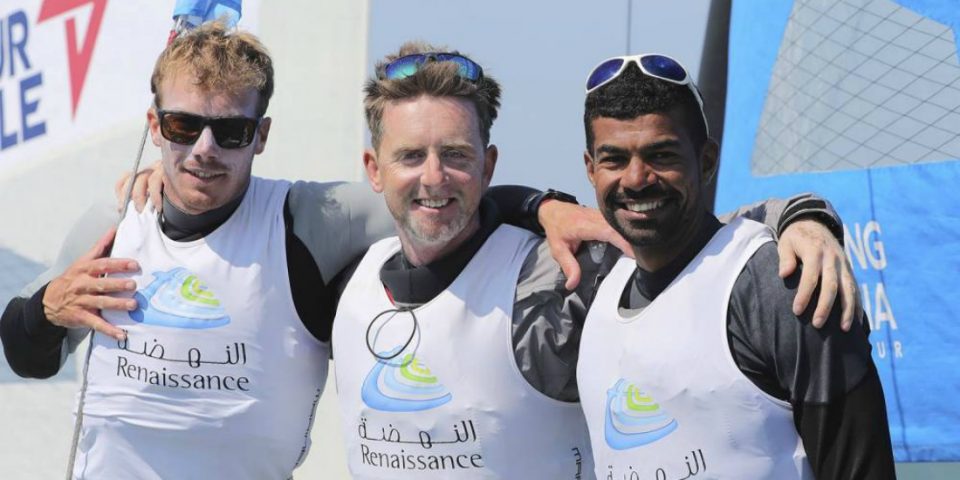 This is a big operation with the Oman Sail teams on the Tour Voile this year, you say 26 people in total over the four boats. You have been doing more and more coaching recently, does this experience alter your role as skipper at all with your team or within the wider set up?
Well there are pros and cons to a big team. We’ve got a lot of wealth of information. We’ve got a huge amount of resource but obviously that resource is shared out multiple ways and there’s more potential slip ups. But if anything I think probably my role has gone back a little bit in the sense that I’m more now more selfish towards the performance of our team, there’s less room for you to have that hands on helping with everyone attitude without compromising what I am here for. I’m looking after number 1, myself and my performance.  For us we are very much focused on our boat and it’s just about our performance but so too we need to not make it hard for everyone else.

You started out with Franck Cammas in a very hands on role coaching the team, as you say his world has changed, moving to co-skipper the Gitana Ultime, what has he left as a positive impact?  And meantime you have been coaching him and the team on the GC32….
He is not here right now but he has done a lot over the season. When we’ve been in Oman in the winter then I obviously interacted and helped more in the fact that I’m English so the understanding is probably easier and better for the boys. It’s not coincidence that I ended up coaching Franck Cammas after spending the winter with him in Oman. I had a few days where I would be the coach in Oman and he liked what he saw I guess! It amazing isn’t it? (to be coaching Cammas). First he asked me to go to Villasimus for the training very much on the proviso that it would just be one week and it ended up being a season.

So what do you think he likes that your bring to the party?
I think Franck’s very digital, he works in a digital world and I’m quite analogue, but I understand you need to be digital so I’m kind of a blend. I think sailing is relatively analogue, but he manages to make it digital. He wants more of a realistic overview as to why things aren’t digital and to take an actual look at the race course and come up with an idea. Franck comes from a world where you can do weather routing and draw a line to follow. That’s not necessarily my dinghy sailing world really so I can try and give him the ideas, the feel to follow as best as possible. It’s worked really well so far, I mean we were disappointed in Lagos to not win (4th place in GC32 World Championship) but we were never going to beat Alinghi, they sailed fantastically but I think on that last day we were very close to being second overall.

So you have been doing more and more coaching, some 49er coaching stuff and even coaching support in kiting?
I really enjoy it but I’m well aware of the fact that your sailing career is only so long and at my age you want to keep sailing while you still can because your very quickly pigeon holed in to a coach. I’m well aware that I will be one day (a coach) but at the moment, no I’m not. At the moment I still feel like a sailor.

And here you are back with Oman Sail on the Tour for the fourth time?
Oman Sail and the Tour are a fantastic platform. I’m lucky enough to have been with Oman since the Extreme sailing series, and have done all of it. I do a little bit of work with Abdul in the 49er and I will do more. So I love the Oman programme. I like it and I think it’s important we push it on. I like being involved with that but it still means I can go out and sail. It’s a shame there are not more English guys here but we’re racing some very good sailors.

What is the level on the Tour, is it as high as before?
I think so. There are two very good teams. You could say that least year’s winners Lorina Lemonade are not here, but most of their sailors are spread across the other teams. We’ve got one or two of them and they’ve all been snapped up. I think the level’s pretty up there still. What I’d say is maybe there’s a bit less depth. So, I’m pretty sure now the Super Final is the top 10 whereas last year it was very possible to miss that last day shoot out. We should feel pretty confident to make that Super Final. I think there’s a good variation with the Raids and the Stadium racing, I love this format – this format is great and it’s so unique. But then I come from a dinghy sailing background where I’ve just done short course racing. So, to have the chance to go and look at weather routing and do a 40-45 mile race that’s going to take you five hours. And you can either get hugely lucky or hugely unlucky. It’s never over till it’s over it’s awesome but then I’ve just done the GC 32’s and that’s great, the sport’s so cool because it’s so diverse.

Do you have the impression that there is a big following for the GC32s’ do people care?
I think so, I got the impression they care about it, just like if you sail a TP52 a lot of people seem to feel that’s the most important thing in the world. From my perspective that is great old, traditional sailing but it’s very slow and analytical. All the boats seem to start at the same place on the line because they know they’re relative performance to each other. And that is awesome too. I’d love the chance to be involved but it’s not where my sailing’s been. But the GC32 are amazing, I was watching the one race where you had Arnaud Psarofaghis  was round first, we were coming second which is Franck Cammas, you had Adam Minoprio third, Ben Ainslie fourth. It was really good racing – still some excellent levels of stupidity from all of them which was reassuring that even these rockstars make mistakes! Even when there’s good guys around you can still look pretty stupid.

And talking of what viewers care about, what do you think of the SailGP circuit?
I like it. I I think it’s gonna take a little bit to grow, there’s too big a difference in standards at the moment personally. Nathan (Outteridge) and Tom (Slingsby) they’re brilliant, probably the two best sailors thereanyway I’d say. If you put them in Optimists they’d win – maybe not, Tom’s and bit fat for an Optimist these days! I’m joking but I do think if you put them on a level playing field I think probably Nathan or Tom are the two best guys anyway. But the fact they’ve done more time in the boats as well, it’s a little bit like let’s just get to the final and see who can win. Having watched the GC’s where people know how to sail the boats better so the standards is more even and better there. So I think it’s great we just need to be patientto let it become what it’s going to become. I think it will become a super high speed, frightening to be involved with, top end of what our sport is.

Do you see any teams moving from the GC32 to the GP circuit?
No, you hear rumors about some teams trying to but I don’t know the details of SailGP enough but they’re trying to keep it as it is. But to be really successful you need the top guys, you don’t really need owner drivers coming into it to be able to play at it. It wants to be exclusive and how you select the guys to get the best I don’t know. There’s some very lucky boys out there aren’t there! And in many ways they’ve earned it but at the same time there’s quite a lot of other good sailors. To make it work you’ve got to sell a story to be honest, there’s gains to be made on their TV and they seem to be working on that and evolving with that as they learn more about it which is good to see. But at the end of the the day it’s the show …..how you put on the show and I think places like New York, while they’re great – it’s like your trying to commentate on Mario Cart aren’t you. So you imagine trying to sit behind a Mario Cart screen and try to make it sound like a sensible sport. Whereas if you know sailing and like I imagine it will be in Cowes, you’re going to be able to lay down a picture of the regatta and the venue, what the correct strategy is and then follow and people will execute or not execute it. As soon as you do that you make it a sport that’s understandable.