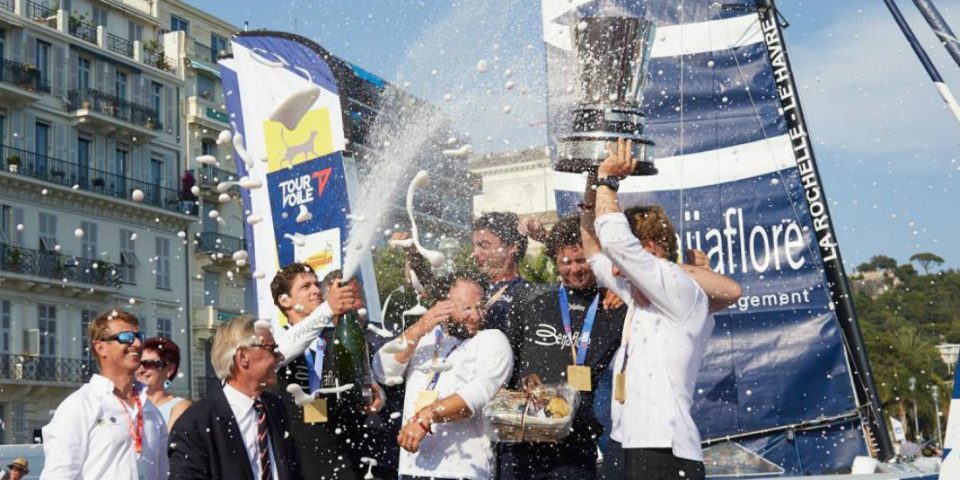 Pierre Mas has kept his word. At the end of 2016 he signed with Beijaflore for a three-year programme in the Diam 24. Mas, a veteran of several America’s Cup campaigns in both French and Chinese colours, there and then committed to winning the Tour Voile within three years. And progress has been entirely on target, third in 2017, the team led by Bellet then finished second in 2018 and now, are the winners in 2019. This is a great success for the team and for the sponsors who have ensured Mas and the team have had the resources to fulfill their winning objectives. Neither Pierre Mas nor Laure-Amélie Lelong, Beijaflore’s communication director, would reveal their budget when interviewed by Tip & Shaft, but as Jean-Baptiste Durier the director of the Tour Voile at Tip & Shaft recently highlighted, a budget to win the event (and to attend the Diam 24 circuit) is of the 250,000 euros. According to our information some budgets exceeded 300,000 euros.

This success is entirely in keeping with the ambitious approach of the management consulting company Beijaflore which was set up in 2000 by Guy-Hubert Bourgeois. They have 1,200 employees based between Paris, Brussels, Geneva, New York, Rio and Sao Paulo and had a turnover of 105 million euros in 2018. Pierre Mas has known Bourgeois for a long time. “We met at the home of mutual friends, he was a partner of the Areva Challenge in 2003 with his previous enterprise, Devoteam.” Mas recalls, “We started a Longtze program with students from Essec, then went with a professional crew. When the Tour changed format Beijaflore asked me to set up a team. The result was decent [7th in 2015 with Nicolas Bérenger skippering, Ed], but the aim of Beijaflore was to build a crew which spoke to and appealed to Beijaflore’s younger audience more in tune with the needs of the company. “The company’s Laure-Amelie Lelong explains: “Every year Beijaflore recruit between 350 and 400 people, mostly young graduates, who work hard with us for the two-three years they spend with the company. This Tour Voile project perfectly fulfills these objectives and it is very much oriented towards internal communication more than for the external profile. ”

In 2018, the Tour Voile project was augmented when the company also chose to partner William Mathelin-Moreaux who raced a Class40 on the Route du Rhum. He was in architecture school in Paris then, and now recalls,: “I met Beijaflore nine years ago on the Trophée de Lycées on which they supported me. When I planned my Class40 project I approached them again. They had not programmed to have another, second sailing project, but I came along at the right moment. And my project chimed with their recruitment campaign for young graduates of my age [he was 25 years old]. Unlike the Tour which is a team of professionals most coming from an Olympic sailing background, I was a pure amateur only with experience in IRC racing. But clearly the challenge facing an amateur guy like me who came from a modest sailing background and then them giving me the means to succeed interested them.”

“It was a great opportunity and it has continued. He was was one of the youngest skippers in the Route du Rhum was making his name and for us it made sense to support him with a view to augmenting our narrative to employees and potential employees. And the Route du Rhum is a race with considerable profile, saying more to our employees than the Tour Voile which is still a bit for those in the know. “confirms Laure-Amélie Lelong.

On his first solo transat William Mathelin- Moreaux finished 16th but the support for the project  has been renewed for 2019 onwards with a new boat, the Lombard design which won the Rhum with Yoann Richomme. And the goals are, correspondingly higher, not least on the upcoming Transat Jacques Vabre which the young skipper of Beijaflore will race with Marc Guillemot . “The project was supposed to be only for the Route du Rhum, but it did well internally, so they decided to continue, but only by targeting a higher level of performance. So when the opportunity to buy Yoann’s winning boat came up we took it,” continues William Mathelin-Moreaux, who finished second in the recent Les Sables-Horta-Les Sables. Right now he is preparing to race the Rolex Fastnet Race and will be aiming for a” Top 5 ” on the TJV between Le Havre and Salvador de Bahia.

Now that the goal of winning the Tour has been achieved, what does Pierre Mas have in mind? “Well it was always planned that the support would be for three years so the story has been great. There was a good budget, now the present is the Class40 and the new boat which has a lot of potential.” Says Laure-Amelie Lelong. “This represents an important investment for a company of our size [again they won’t disclose details but a good performance budget in Class40 exceeds 200,000 euros per year, Ed]. And we have a CEO who is very careful, he does not do things on a whim.”

And for Pierre Mas and his team who wish to continue to sail together, now an accomplished  fighting unit galvanised by these three years in the Diam 24, but they maybe don’t stay within the budgetary scope of the Beijaflore. “We have developed a multi-skilled group that wants to continue in high-level sailing, now we must find the resources for a new project,” confirms Mas. But what project ? “It’s complicated, the GC32 or the TS35 [successor of the D35 in 2020, Ed] might be the way, with a fast boat and a development aspect that appeals to everyone, but these are an extra step up in terms of budget. But it might also be offshore racing. I have memories of the Whitbread. And the new format of The Ocean Race at two levels is quite tempting. The VO65 project is well matched to our objectives, it would allow us to evolve the group and the overall structure. ”

Such a project requires than ten million euros at least which is a significant step up, particularly given that the team wants to continue to compete at the top level: “What interests us is to have the means to win. That was the case with Beijaflore. I have done too America Cup programmes on the cheap, where you put a lot of energy but you are disqualified before the start just because of the budget limitations. I do not want to do that stuff again “, concludes Pierre Mas.