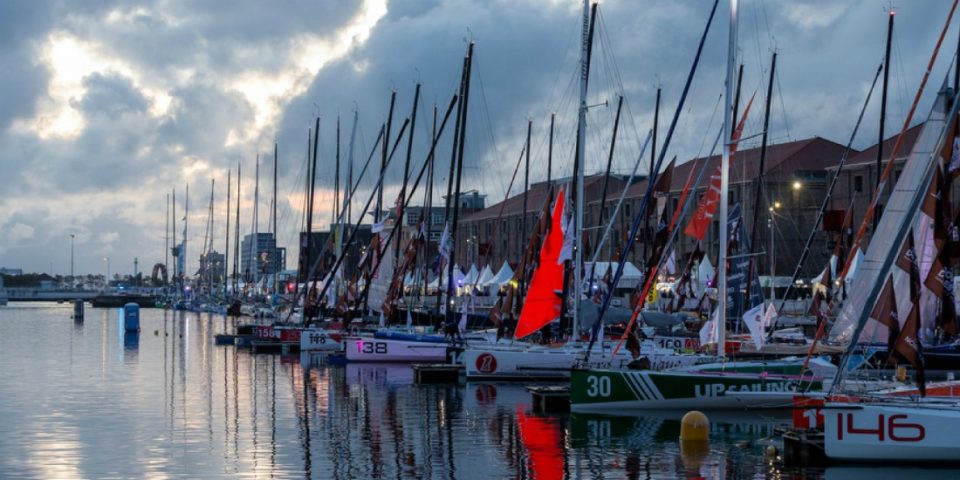 Class40/Multi50: Who will win the Transat Jacques Vabre?

As before each and every major race, Tip & Shaft gathers a panel of experts to discuss who represents the best prospects to win the Transat Jacques Vabre. So here we are this Friday looking at Class40. On our panel to mull over Class40 are Yoann Richomme, winner of the Route du Rhum last year, the Lorient coach Tanguy Leglatin and designers David Raison and Sam Manuard, who each have new 40-footers, the German Jörg Riechers who is back in the class, Manfred Ramspacher, organizer of the Normandy Channel Race, and Rémi Aubrun, who is a renowned sailor and the head of the design office at sailmakers All Purpose. And talking about the smaller field of the Multi50 class are skippers Armel Tripon, Erwan Le Roux and Lalou Roucayrol. Next week Tip & Shaft will analyse the Imoca class.

Just like the previous race which saw V & B (Maxime Sorel / Antoine Carpentier) win ahead of Aïna Enfance & Avenir (Aymeric Chappellier / Arthur Le Vaillant) this time again it looks like being too close to call. There are the Marc Lombard Lift40 and the Mach 40.3 designed Sam Manuard as well as the two new scows, the Max 40 Credit Mutuel (Ian Lipinski / Adrien Hardy) the first Class40 designed by mini ace David Raison which was launched on August 13, and the Mach 40.4 Banque du Léman of the Swiss duo Simon Koster / Valentin Gautier which was launched on September 26th. For most of our experts this latter is now too late to be expected to be near the front of the class, having only a few days sailing under its belt.

“Even if the boat has great potential, it is too new and the two skippers don’t really know the class, I can’t see them up there at all“, summarizes Rémi Aubrun. Manfred Ramspacher adds: “For them as for Crédit Mutuel, it will depend a lot on the conditions out of the Channel if it blows hard will be difficult, because they don’t have the known reliability to let the skippers push hard .”

Of course Sam Manuard defends his new offspring, citing the first sails on the Bank of Léman as indications that they have greta potential. “The speeds are really impressive, the boat is very fast on a reach it’s a bit wet but in good conditions we can count on an extra 1.5 to 2 knots more than the Mach 3. Everything will depend on the conditions: if it is easy and there is a lot of reaching they will be able to maximise the speed of the boat. “

As for the new Crédit Mutuel, the opinions are a little more divided:
“I think it’s going to be tough for them in terms of reliability,” says Yoann Richomme, “But that notwithstanding I’d cite the schedule of mine from last year which worked out OK,” he said. [Richomme but his Lombard, the current Beijaflore, in the water at the end of June and won in the Route du Rhum November, Ed] so, yes, it can possibly be done. We were not exceptional in terms of reliability, but it all held together OK, so let’s see. ”  Rémi Aubrun says: “A Class40 is still quicker to make reliable than a Mini or an Imoca, those two being more complicated boats”.

As for the designer of Credit Mutuel, David Raison says “I’m pretty confident”, adding: “In fact on these boats the first sources of failure are related to energy, electronics and the engine, but guys like Adrien and Ian are a threat even without electricity they are a remarkable pairing. “

For Jörg Riechers, there is no doubt that the boat / skipper pair is cut for the win. “Ian and Adrien are super sailors, Ian, like in Mini, always has the best boat, it’s hard see any pairing looking better on paper.” Asked about his first Class40, David Raison explains: “It is not so very typically a scow in terms of its behavior, in the sense that it is not a big powerful reaching boat, it is however more mainstream than boats that I usually draw but it will go very well in the breeze and downwind and about the same as the others in the medium winds. “

Those who saw Credit Mutuel sailing out of Lorient agree with Rémi Aubrun – “If Ian and Adrien can find all the buttons to make it work well they can be the big surprise. They can go at least as fast all the time as the others most of the time even when the boat is still sailed at 80-85% of its potential “. Tanguy Leglatin agrees: “The Max 40 is very versatile, better than the others in winds below 10 knots and above 18. And the more sea there is, the more impressive it is, it has a big capacity to use the waves and seaway.”

Crédit Mutuel looks to have the potential to spoil the party and win this Jacques Vabre, otherwise the TJV should reprise the duel between the Mach 3 and the two Lifts, so says Leglatin who says it will be very close….again. “The Mach 3 remains more versatile, the Lift is always better jib reaching  but over the piece they are close.”

The boats are more or less equal so it is down to the crews who will make the difference. Thus, here our aces tip the Manuard pairings, namely Aymeric Chappellier-Pierre Leboucher on Aïna Enfance & Avenir – who won the Défi Atlantic this year, the Normandy Channel Race and Les Sables-Horta and Brit Sam Goodchild and Fabien Delahaye (Leyton) and Luke Berry-Tanguy Le Turquais (Lamotte-Module Creation), winners of the Fastnet Race.

“All those have accumulated a lot of miles and have evolved and optimised their boats and their  sailing, like Aymeric, who has huge experience, they start with the big advantage,” declares Sam Manuard. Yoann Richomme adds: “I see a fight between Leyton and Aïna with maybe a small advantage to Leyton. I sailed on my previous boat alongside Sam and Fabien and they seemed to me to be really on the money I have never seen a Mach 3 go so fast, they have an added asset in Fabien who is a good weather strategist. ” Manfred Ramspacher is also impressed by the duo: “Sam is very talented and has a lot of experience offshore, Fabien is also very sharp.”  Rémi Aubrun in contrast goes with Luke Berry and Tanguy Le Turquais: “They are fast and are at they arrive at the top of the curve they are on their game.”.

What about Louis Duc-Aurélien Ducroz (Crosscall Chamonix-Mont-Blanc) and William Mathelin-Moreaux-Marc Guillemot (Beijaflore) who sail the two Lombards launched in 2017 and 2018? Manfred Ramspacher says Louis Duc has “a very good boat and is able to go 20% faster than the Mach under certain conditions”……..Rémi Aubrun highlights “the slight edge of madness” of the duo Duc-Ducroz, Yoann Richomme adding: “Louis knows his boat well, he has made a nice set of sails this year, he is hungry and will be keen to show that he has in the match. But I would still put them just a notch back from the others because I am not so sure about their strengths as a team“. That’s the same analysis as Aubrun about the Mathelin-Moreaux-Guillemot duo: “They don’t look like the perfect mix as a pair. The Transat Jacques Vabre is a very hard race and I’m not sure that this mix of two generations works. I am a bit afraid it will be complicated in terms of communication. ”

As for the underdogs, Kito de Pavant and Achille Nebout could have had a role to play if they left with all their cards in hand but they were forced to change boats and charter Jean Galfione’s boat after the dismasting of their Verdier Made in Midi plan. Our experts also mention Catherine Pourre and Pietro Luciani (Eärendil), super reliable, third in the Fastnet, or Jörg Riechers and Cédric Château (Linkt, the Owen-Clarke plan launched last year). What does the German skipper think? “We think a place between 5th and 9th would be good, and if we make a good strategy, we can create a nice surprise and finish in the Top 5, but in pure speed, we cannot compete with others, our boat is level with the Mach 2 “.

With three boats at the start, the Multi50 race promises to be less open especially since Thibaut Vauchel Camus (working with Frédéric Duthil), third in the Route du Rhum last year on Solidaires in Peloton-ARSEP, was on the water since early 2018 and so has a clear advantage in experience compared to the pairings Sébastien Rogues / Matthieu Souben (Primonial, a past winner of the Route du Rhum as Réauté Chocolat), which starts in the class, and Gilles Lamiré / Antoine Carpentier (Groupe SCA-Mille et un sourires) “Thibaut is very clearly the favorite, he really prepared well for the Jacques Vabre, the boat has been ready since it went it was launched and the he makes a good team with Frédéric”, says title holder Lalou Roucayrol who does not race this time.

Erwan Le Roux, president of the Multi50 class, however, believes that Sébastien Rogues and Matthieu Souben can be in the match: “The boat is reliable. I think that Seb has already gained confidence in his boat. He did a lot of Grand Prix, he sees he is fast and is well supported by Mathieu who has already sailed the Multi50 with Lionel Lemonchois. ” Armel Tripon says about Seb Rogues: “When you’re starting in a new class, you are in a bit of an unknown area because boats can break away and you are not really settled in yet to know how far we can push the boat. To race these boats in daylight inshore is one thing to be out on the open ocean on a dirty night is another thing entirely. We remember that Eric Defert capsized two years ago it would be stupid to take too many risks.”