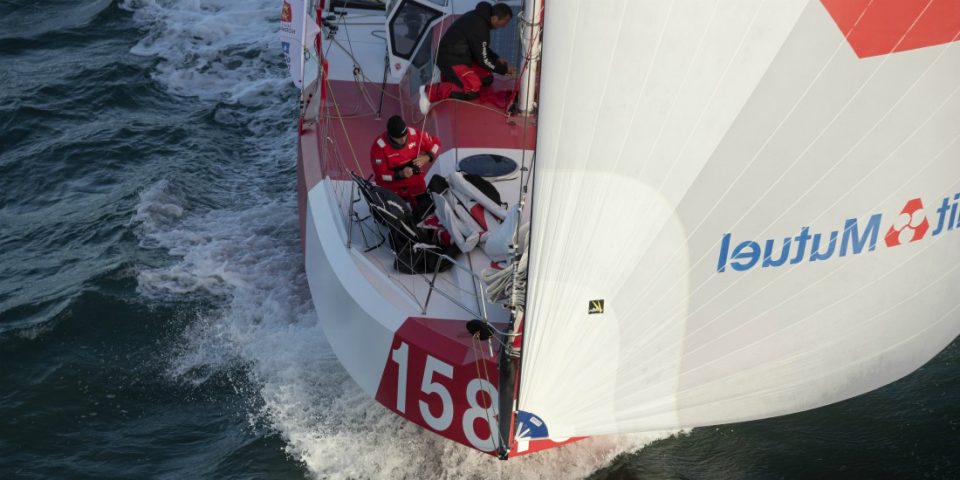 As they are now along Brazilian coasts, Crédit Mutuel (Ian Lipinski / Adrien Hardy) is still leading the Transat Jacques Vabre in Class40. This is already a step change performance for the scow bowed 40 footer which was only launched on August 13, showing very well against Mach 40.3, the benchmark design in the class to date. Designer David Raison talks here of the new boat’s performances but also of Maximum Team BFR Marée Haute Jaune sailed by François Jambou, which at the same time is in the lead in the Protos in the 2nd leg of the Mini Transat while his new Series built Maxis are not having it quite as easy.

Crédit Mutuel has impressed observers and competitors alike during this Transat Jacques Vabre, can give us an insight into the philosophy behind the design?
Well the philosophy is a bit like that of the Maximum which I did that Ian [Lipisnki, its skipper, Editor’s note] sailed to the victory in the Protos on the last Mini-Transat. First up it is a boat which is quite easy to sail, which helps conserve the physical and mental strengths of the sailors. So we worked a lot on ergonomics, on comfort, so for example there is the external helm position but also a steering position under the coachroof hood. It seems easy to say these things but really they are not that obvious, and it kind of implies compromises in terms of set up and the layout of the cockpit. But in terms of performance we know that these scow hulls are synonymous with good reaching performances and good acceleration. And they are generally drier. From that starting point we sought to improve on these original designs looking to get better in the transitions and in the light stuff. And, as well, we tried to significantly enhance the usual concern among the Class40s, a poor ability to go upwind.

So what did you do exactly?
We wanted a very versatile boat. It is a little narrower on the waterline beam, with a hull that is not at the maximum for the rule; The Mach 40.4 [Banque du Léman, launched in September and currently 4th, Ed], is broader in the ‘shoulders’, and is quite different from ours in this area. But equally this also implies slightly larger appendages than the other Class40s.

Looking at what you see on this Transat Jacques Vabre, is it a really boat which is more comfortable than others?
If you watch the videos, yes, you can see it. Look at Aïna’s drone images [Aymeric Chappellier’s Mach40.3, Ed], the boat is making something like 12-14 knots and all the time you have water over the deck. Correspondingly look at the video posted by Ian on Wednesday, at a little over 12 knots, yes there are waves on deck, but that’s not the same at all and that is all about the hull shape. But, whatever, when you get into bigger seas it’s different.

Were you surprised by the punchier choice of routing out to the west chosen by Ian and Adrien near the beginning of the race?
It’s not for me to judge their option as that is up to them, but as they did, it was because they trusted the boat in terms of reliability and performance. This confidence means that, at worst, if it doesn’t not work out and you lost 50 miles, they knew they’d be able to take them back. They got among the leaders very quickly.

And so a speed edge in the trade winds of between 1.5 and 2 knots over their competitors, and speeds which have meant a new class record for 24 hours. Is that pretty much consistent with what you expected from the boat in these conditions?
To be fair it was a pretty long standing record, the previous mark was actually only slightly higher than the Mini record. I guess recently there was just no course and conditions that was suited to beating it. They beat it by 8% and that is big….but during that time the boat was able to hold averages of over 20 knots under a pilot for half an hour, so 415 miles in 24 hours, at 17 knots average, that does not surprise me given these numbers. As for the differential with the Mach 40.3, it is kind of what we had seen in training. But do bear in mind the guys, the crew, are very good and nothing much surprises me about how well they sail.

If Crédit Mutuel wins this Transat Jacques Vabre do you think designers of future new Class40s would be opting for the scow form?
Since I did the Magnum and won the Mini-Transat in 2011, we know that this form of boat works. Only the inherently sceptical observers still doubt it. Everyone who has trialled these boats don’t want to go back to classical hull forms. Look at the Class40 Lombard designs which came out in 2017 and 2018 and they were already heading in this direction, they were semi-scows. But, you never know, maybe in two years, a guy will show up with something that will be completely off the beaten track with a boat that will convince us of something new and different.

And these hulls forms apply in Imoca?
Yes of course ! Even if there are many criteria in the Imoca rules which mean the stability of the scows cannot be exploited quite as much as in Class40, we have always seen boats now which are fast which are quite flat and without a pronounced bow. On this Transat Jacques Vabre, we have been faster than a good number of Imocas without foils, but they are full carbon and canting keel, so we see that the hull forms is a big determinant of the performance of boats and their capability to accelerate to high speeds.

If you were asked to design an Imoca, what direction would you go in? Have you ever been asked by teams?
I’d go straight into it! (Laughs). On these scows, we look a lot the issues of stability, power, and righting moment that the hull form can bring, and I think that in Imoca they have not made this transition quite yet. But yes, I had exchanges with teams, looking at drawing hulls or foiling solutions especially when I was with SeAir. But today, while I managed Ian’s project almost alone, on an Imoca, it would be more complicated, it is a massive job, you would need to have a research and computation team or I would outsource some of it to outside resources.

What projects are you working on today?
I’m working on the starboard foil pit of the Mini 747 [the first Mini scow with which he won the Mini-Transat in 2011, Ed] SeAir had equipped it with the port foil and it is getting back to the Mini rules foiler version for Laurent Cornic. And I’m also working on the Mojito 650 for idb Marine [A Mini suitable for cruising, Ed].

What do you expect from this 747 on foils?
It’s a hell of a thing in terms of pure performances. As for all the transitions, we have ended up with more weight in the platform, which handicaps the boat. But the tests carried out by SeAir and Laurent Cornic are promising and we remain very hopeful.

So there is the foiling Mini on this Mini-Transat in the proto fleet, Cerfrance of Tanguy Bouroullec, what do you think of his performance?
Right now he seems compromised, to have broken something, his bowsprit [this is the case, as well as his chainplate, Ed] or he has a rudder problem. But I think he showed potential compared for all that it is a recent development. Its first steps were also almost unexpected. These boats are very complicated to develop. A proto is a six months to a year in development and there are so many  variables, it takes almost two years to know how to use such a boat. But I think that it will end up winning in 2021 or 2023. The big difficulty to make foiling or flying work on these prototypes is, for one thing, the autopilots and the loads and pressure at the high speeds on these small boats, it is physically and mentally pretty demanding.

But the Maximum of François Jambou was second of the first stage and leads the second one, can he keep it up?
The fact that he is ahead does not surprise me at all. I know how he goes. I know he will hold the pace and not tire, we saw that the pre-season that it was faster on the VMG course, I was really confident. But the course is still long, a lot of things can happen. What is certain is that we ticked all the boxes with the Maximum. To launch a boat like this which is so successful straight away is unlikely to happen again.

Can he go on and win more in the proto?
There may be a new boat out for Olivier Jehl, with the same hull and small improvements to the appendages, but without foils for funding reasons. Otherwise, it will be beaten one day by the foilers if the class rules continue to allow them.

Last but not least the Series division of the Mini-Transat, we expected a lot from the Maxis which are still dominated by the Pogo 3, what do you think?
We have the 24 hours record, that’s good for a start! But in the Pogo 3 there are good guys who sail fast. But it Ambrogio [Becario a leader in series, Ed] is only about twenty miles behind the 865, it’s not because Francois Jambou spends his days rolling cigarettes it’s just the level is very high and intense. When I look at the averages of the first three to four Pogo 3s since the start I take my hat off. These are sailors who have spent a lot of time getting ready. That is not so much the case for our Maxi clients who have all had jobs to do. We did not expect to have five boats in the Mini when we launched the project. So if we can get two or three in the Top 10 that would be good. It is true that we all hoped for better in terms of performance, we will continue to work at it to make the boats go  faster.