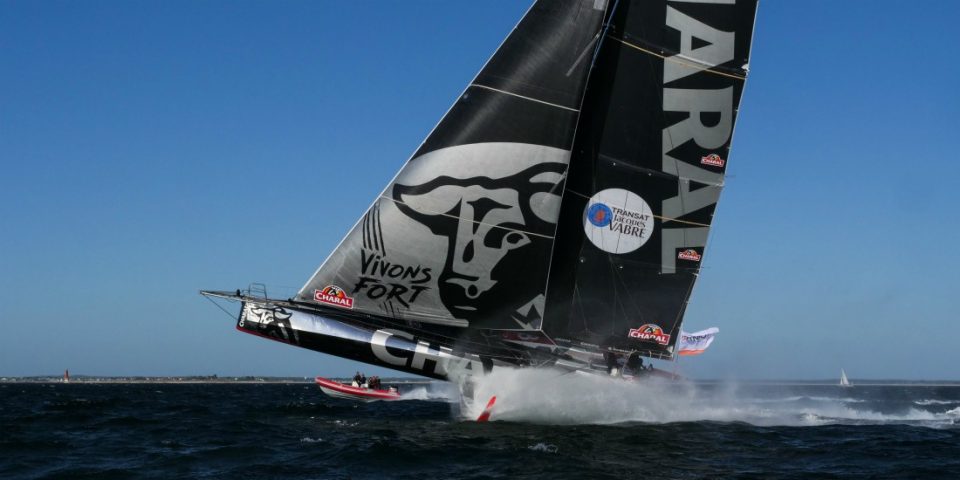 Imoca: Who will win the Transat Jacques Vabre?

After last week’s look at the Multi50 and Class40 on the Transat Jacques Vabre this week it is the 29 boat IMOCA class which comes under scrutiny at virtually one year before the start of the Vendée Globe. To help in our analysis of this record entry we have gathered two former race winners from the IMOCA class in Michel Desjoyeaux (2007) and Jean-Pierre Dick (2003, 2005, 2011 and 2017), Sebastien Josse, former skipper of the current Malizia, Antoine Mermod who is the president of the Imoca class, designer Sam Manuard, whose first Imoca, L’Occitane, is expected to launch at the end of the year, Christian Le Pape, head of the Pole Finistère offshore race training group, and two journalists, Philippe Eliès (Le Télégramme) and Frédéric Pelatan (Journal du Nautisme).

To start with, unlike Brexit, there is unanimity. Of the eight specialists that Tip & Shaft interviewed, seven tip the duo Jérémie Beyou-Christopher Pratt on Charal the VPLP design which was launched in August 2018.

“Perhaps theirs is  not the fastest at all speeds but it is the most successful boat with a crew that has the experience, which has already suffered the main setbacks and has not broken so much”, summarizes Michel Desjoyeaux.  “All the lights are showing green, their time factor in the the development of the boat is a big benefit compared to the others”, adds Sébastien Josse who is echoed by Frédéric Pelatan, “On paper is should be straightfoward for Charal. The fleet will undoubtedly be much more even in  the Vendée Globe, but here they are a year ahead and they have that confidence factor in their boat which really counts for a lot. ”

And Christian Le Pape reminds us that “Charal has won the two races they have competed in [the  Fastnet and Azimut Challenge, Ed] and was always among the best in training.The boat is reliable and well set up with a solid and serene crew.’ Finally Philippe Elies: “One year ago I did the Defi Azimut with them, the boat was flying very high but there was quite a bit of stress and panic on board. It was a bit of  a best. I was back recently, a year later, they are still flying high, but it is much more stable and with very impressive control. ”

Of the new generation foilers all launched in August and September, most agree that “Arkéa-Paprec (Sébastien Simon / Vincent Riou) is out of the game in this context, according to Mich Desj’ following the breakage of their port foil and that Thomas Ruyant and Antoine Koch (Advens for Cybersecurity, launched in September), may be too new and unproven.

On the other hand opinions are divided about the chances of Apivia (Charlie Dalin / Yann Eliès) and Hugo Boss (Alex Thomson / Neal MacDonald) both of which were launched at the beginning of August. They can be on the podium, or even win.  On average our experts put Dalin and Eliès third (tied with 11th Hour Racing) and the new Hugo Boss in fifth position.

“Here I was four years ago in this same position with a brand new boat. I was a bit lost and I could not do anything,” recalls Jean-Pierre Dick, who had had to give up on that Jacques Vabre 2015. Antoine Mermod, meanwhile, believes “Apivia and Hugo Boss are both a little young, there is still a good chance that they are not yet at 100% of their potential”.

Philippe Elies believes there are more chances that the Verdier design Apivia will be among the leaders: “It is less spectacular and does not fly as high as Charal but that there are no holes in the performance. They have benefited from the MerConcept structure. Some things are already well validated.”

Elies is not convinced about the new Hugo Boss, yet: “I cant forget that the last time [in 2015], Alex was here with a brand new boat and they almost lost it on the Jacques Vabre. And I think that the English not so good to  develop their boat quickly. When you are all alone in your corner, you can not progress as fast as the guys in Port-la-Forêt or Lorient who go out together every day .” Frédéric Pelatan is not so categorical: “Hugo Boss is a big question, it seems that with him, it’s all or nothing“. And finally Christian Le Pape recalls that in the past we often buried Alex Thomson… and wrongly so.

In view of the weather forecast, the head of the Pole Finistere tips the new foilers, including Charal who will take a southerly routing out of the Channel  in strong upwind conditions rather than taking big risks (up to 45 knots on the files), maybe even getting downwind by going around the north of the depression which is in the east of the Atlantic. “First, they have  compensated now a bit for their previous handicap upwind and after that the delta is so significant reaching that they can quickly catch up with any initial deficit. In 20 knots of wind at 70 degrees from the wind, the straight boards go to 14-15 knots, the first generation foilers go at 19-20, and the new boats at 25! They will extend from the Canaries and after the Doldrums they will only fast reach this is not a Caribbean transatlantic. ”

Looking at the other contenders for the podium, the Tip & Shaft panel looks to the first-generation foilers (2015), especially PRB (Kevin Escoffier-Nicolas Lunven), second on the podium according to our experts also as well as 11th Hour Racing (Charlie Enright / Pascal Bidégorry). “PRB are quiet and discrete but look at their results [the boat won the Bermuda 1000 Race with Sebastien Simon at the helm, then finished second in the Fastnet and the Defi Azimut, Ed. ]. “It is clean, well prepared and meticulous “, comments Sébastien Josse. Christian Le Pape emphasizes the fact that the boat “has new headsails”,  Frédéric Pelatan adding: “With its very light weight and large foils PRB is able to go fast with high averages especially off the line they can get moving rapidly in good conditions. ”

As for 11th Hour Racing, Sam Manuard highlights “Pascal Bidégorry is an excellent strategist and  Charlie Enright has a lot of oceanic experience, they are on a on a strong, proven boat in which they have a lot of trust”. Sébastien Josse also stresses the strength of this duo “We saw on the Azimut Challenge that for a crew who got into the boat very late they were immediately in the match [third place, Ed].”  Michel Desjoyeaux is not quite as convinced, saying that on the course of a Jacques Vabre…… “those who have not updated and evolved their foils evolve will not do as well.”

What of Initiatives Coeur (Sam Davies / Paul Meilhat), with their big foils. Many many consider them an outsider capable of breaking into the Top 5. “Sam has sails which are a  little smaller to lose a little power, but it’s a good comfortable boat  and not too hard work in the breeze,” says Christian Le Pape. Sam Manuard says he can see Maitre CoQ (Yannick Bestaven / Roland Jourdain) on the podium: “The boat is strong, proven and very fast, Yannick and Bilou have a lot of experience, I have a good feeling about them.”  And then there are outsiders like Malizia (Boris Herrmann / Will Harris) or MACSF (Isabelle Joschke / Morgan Lagravière) with its new foils, which Antoine Mermod assures: “Unfortunately for them, they launched late , but the boat looks great it flies early and seems stable on its foils, I was very pleasantly surprised by what we saw on the Defi Azimut  [8th place] “.

The favorites and outsiders quoted by our experts are all foilers. What of the non-foilers with straight boards?  “On this course there is no question you need foils.” says Michel Desjoyeaux testily, further endorsed by Sam Manuard: “There are conditions where they are almost even, but reaching, they lose so much. There will be some reaching at least on the approach and out of the Doldrums but after that the conditions will be a little less unfavorable for them than in the context of a classic weather pattern. Fifth would be exceptional…..”

But the race between the conventional board boats will be as exciting to follow. Many see the advantage to Groupe Apicil (Damien Seguin-Yoann Richomme) and Banque Populaire (Clarisse Crémer / Armel Le Célac’h). “Damien and Yoann are very interesting in VMG downwind their boat is well set up and super optimized, they have surprised us several times,” notes Christian Le Pape. Jean-Pierre Dick does not hesitate to have Banque Populaire on the podium! “If there is upwind and close reaching at the beginning and when they close up before the Doldrums, they have a card to play.” Philippe Eliès concludes: “I can see Armel and Clarisse winning the daggerboard match, yes Clarisse is still learning but when you see Armel sailing, you have the impression that he is racing a  470 dinghy it seems so easy for him.”