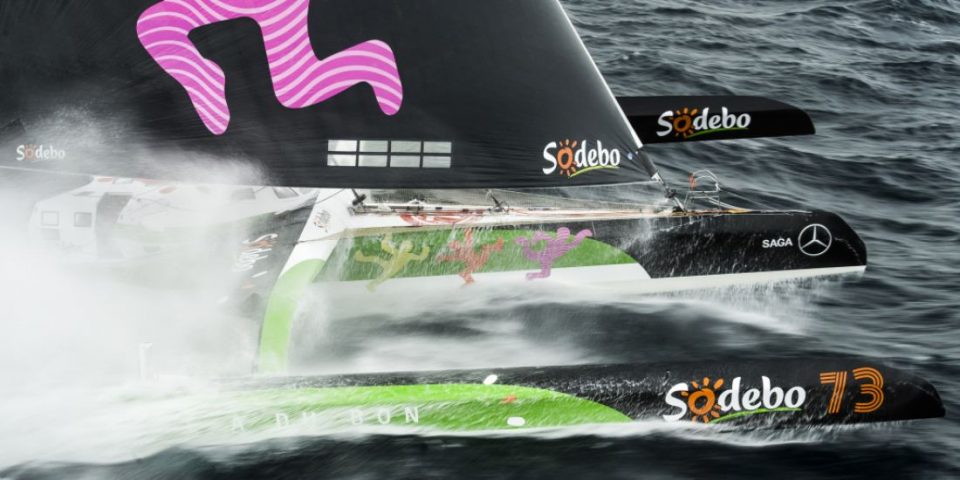 Ultime, Class40: Who will win the Transat Jacques Vabre?

Seventy nine duos, that is a record entry for the Transat Jacques Vabre Normandie Le Havre which starts next Sunday, November 7.  And as before every big race, Tip & Shaft has mustered a posse of experts to assess the fleets and predict who will be successful. In this case we have Francis Le Goff, the race director, Jeanne Grégoire, director of the Pole Finistère at Port-la-Forêt, Tanguy Leglatin, coach at the Lorient centre, Emmanuel Bachellerie, the former general director of the Ultim 32/23 class, Halvard Mabire, president of Class40, and sailors Michel Desjoyeaux and Maxime Sorel, the engineer / navigator Antoine Koch, the designer Sam Manuard and the journalist Jacques Guyader (Ouest-France). Kicking off with the part, the Ultimes and the Class40. Imoca and Ocean Fifty will follow next Friday.

This year the Ultimes are back on the Transat Jacques Vabre. And in the opinion of all our consultants, the Maxi Edmond de Rothschild (Franck Cammas / Charles Caudrelier), which has won all the official races since Brest Atlantiques back in 2019, including a good showing on on the Fastnet this summer, is THE boat to beat. “More than just the favorite, it is for me the reference,” explains Emmanuel Bachellerie. “It is the first Ultime designed to fly back in 2017, they first validated the platform then refined the aero and recently made a lot of work on the appendages. The project is mature.”

Jeanne Grégoire, who observed all five starters at the end of September during their training out of Port-la-Forêt, adds: “They start like on a Figaro! Franck and Charles have enough high level sailing experience across the offshore and oceanic disciplines to be able to transfer all their skills to this big machine, it’s impressive.” “Now they sail by instinct and experience, it is second nature to them they never seem to hesitate”, adds Jacques Guyader who had the chance to sail aboard the Verdier flying machine.

Can the more recent Ultime designs challenge the supremacy of the Maxi Edmond de Rothschild over the 7,500 miles course? “The strength of Gitana 17 lies both in their mastery of its flying mode in medium airs and in its qualities in the stronger breeze. It goes very well in a sea and is reassuring with its higher freeboard. But the level is fantastic and Franck and Charles will not have it all their own way”, promises Antoine Koch, who worked alongside Guillaume Verdier on the design of the Maxi Edmond de Rothschild. He sees Banque Populaire XI (Armel Le Cléac’h / Kevin Escoffier) as the most serious opponent.

That is also confirmed by Michel Desjoyeaux who says of the VPLP design which was launched in April and was the victim of a daggerboard damage during the Port-la-Forêt course: “It is certainly a new boat, but they have sailed a lot [13,000 miles, editor’s note] and the experience of their previous trimaran will have helped them a lot in its development, with a team that really has a lot of knowledge.” Theirs is a team that has bet on solidity and reliability even if it means taking a little extra weight on the scales: the trimaran has a double structure in the beams and monolithic hull bottoms.

SVR Lazartigue, the latest launch of the fleet which is sailed by François Gabart and Tom Laperche, has obviously set the cursor differently and for many, this Transat Jacques Vabre comes a little early on their schedule. “The boat is undoubtedly the most ambitious and it seems to perform extremely well in the middle wind range, but has less sea clearance and if there is a week with bad weather at the start, it could be difficult,” suggests Antoine Koch. These are the very conditions which, on the other hand, could suit Sodebo Ultim 3. Considered to be inherently slower, especially upwind, Thomas Coville and Thomas Rouxel’s trimaran seems strongest downwind in the breeze, which can prove invaluable behind fronts and if the trade winds are strong.

“On a Route du Rhum, the prognosis would have been different. Here the boats here set off for more than 15 days at sea with two passages across the Doldrums. Here it is important to be good everywhere and over the whole time” suggests the race director Francis Le Goff. This double requirement of versatility and reliability is what sees Actual Ultim 3 predicted for the third step of the podium by several of our experts: “Today theirs is one of the best ratios of tuning to the degree of performance. It is skippered by a very complementary duo (Yves Le Blevec and Anthony Marchand), this is the first time that Yves Le Blevec has a trimaran capable of winning”, reckons Emmanuel Bachellerie.

But, as always the enemy is the unidentified floating objects…the big unknown:” All the teams discuss this subject a lot because they have only one desire: to race all the way to Martinique!“, says Jeanne Grégoire.

In November 2019 Ian Lipinski’s victory was on the new Raison design Crédit Mutuel launched the previous summer and it proved the starting point for a new generation of Class40s. Whether designed by David Raison (Max40), Sam Manuard (Mach 40.4), Marc Lombard (Lift 2), Guillaume Verdier (Pogo 40 S4) or VPLP (Clak 40), now there are no less than 12 post-Route du Rhum generation scows which will be at the start of the 45 entered.

“There are a lot of new boats but few really have been tested. And for me that then leaves some opportunities for good 2016-2017 designs if they are very well sailed.” Suggests Maxime Sorel, winner of the Jacques Vabre in 2017 in Class40, who has since moved on up to the Imoca. “It will depend a lot on the start of the race. If there are fronts to be crossed early on then the new boats will go faster.” reckons architect Sam Manuard: “It would need quite weak trade winds for the boats older to be competitive.”

Previously cited as the best defender of “sharp bowed boats”, Luke Berry, partnered with Achille Nebout, like others has a spatulated bow on Lamotte Module Creation (Mach 40.3) to make up part of his deficit when reaching and in the downwind breeze. However, he will have a hard time dealing with the fleet of more recent scows.

Among the new boats the most often cited as a potential winner is Redman (Mach 40.4), skippered by Antoine Carpentier and Pablo Santurde. “The boat is recent but they have sailed a lot with a return passage out and back to the West Indies and two transats,” explains Francis Le Goff. “Antoine has a lot of multi-class experience now (winner of the Jacques Vabre in Multi50 in 2019) and Pablo Santurde is undoubtedly one of the best team-mates in the world,” adds Tanguy Leglatin, who coaches some of the favourites out of Lorient.

Another often cited tandem, the one made up of Axel Tréhin and Frédéric Denis on the Max40 Rescue Ocean Project: “They have less experience of big events, but very quickly found the levers. I put them at the same level as Redman”, assures Halvard Mabire. Ian Lipinski and Julien Pulvé often complete the podium of our consultants, even if their Crédit Mutuel has been less impactful this season.

Behind them are the outsiders who can disturb this theoretical top trio, and there are plenty of them our experts list in no particular order Banque du Léman (Manuard), Valentin Gautier / Simon Koster), Edenred (Manuard) of Emmanuel Le Roch / Pierre Quiroga, La Manche #Evidencenautique (Lift 1 Lombard, winner of the Route du Rhum 2018, sailed on the Jacques Vabre by the Normans Nicolas Jossier and Alexis Loison) and even Seafrigo-Sogestran (Pogo S4, Cédric Chateau / Jérémie Mion). The latter, like their sistership Serenis Consulting (Jean Galfione / Eric Péron), the Max40 La Boulangère Bio (Amélie Grassi / Marie Riou) or the Clak40 Emile Henry Happyvore, a VPLP plan led by Nicolas d’Estais and Erwan Le Draoulec, have all really sailed very little.

With 45 boats on a course which passes through the Cape Verde islands (4,800 miles) favouring less reaching than the old course, the match promises to be close, while the arrival on the circuit of many Figarists (Loison, Quiroga, Le Draoulec, Nebout, Péron…) helps to generally raise the level and push the crews to ask a lot of their boats. That is what prompts Tanguy Leglatin to say: “It would not be surprising if there was more damage than usual in Class40. The boats go really very fast for their size. The winning duo will also be the one who has managed to manage technically their race right to the end.”