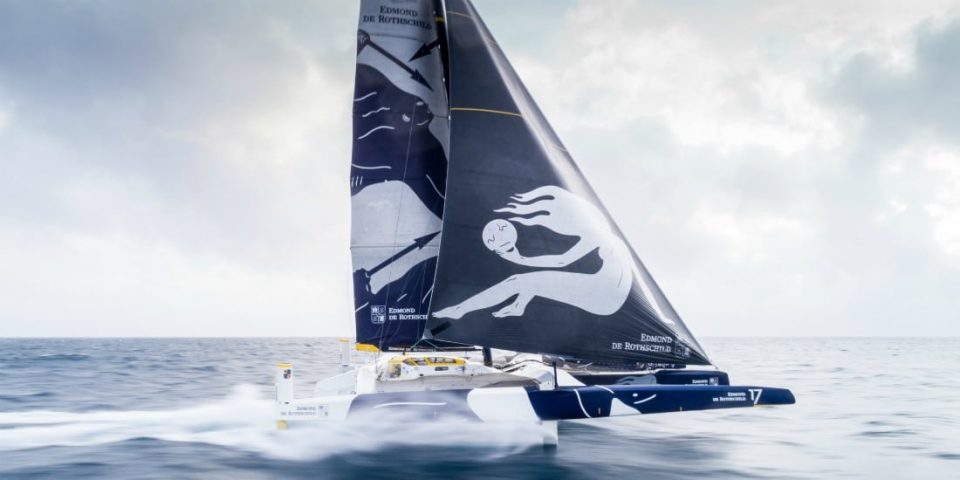 Charles Caudrelier: “In the Jules Verne, 30 to 40% of the routes tested see Idec’s record being smashed”

Since 1st November, the Maxi Edmond de Rothschild has been on stand-by waiting for a weather opportunity to tackle the Jules Verne Trophy, which has been held since January 2017 by Idec Sport (Francis Joyon) with a time of 40 days 23 hours and 30 minutes. Tip & Shaft talked to the co-skipper of the Verdier deigned boat, Charles Caudrelier.

Let’s start with the latest news from the Vendée Globe: did you watch the start and feel a bit envious?
It’s something I have always wanted to do, but for now I am sailing on the world’s most beautiful boat with average speeds in excess of thirty knots. It’s clear that once you have done that, it is much harder to step backwards. I really enjoy what I am doing with a team that is a bit like the Scuderia Ferrari of the sailing world, or maybe nowadays I should say the Mercedes. The long term goal is to do the solo round the world record aboard a multihull. So, it is true that I have been thinking less of the Vendée. I think I could do one in race mode with the next coming up in 2024, but looking at the programme I have leading up to that, I almost certainly won’t be there at the start. Having said that, I do wonder at times whether it’s more a matter of doing it for the adventure. Up until now, I have always wanted to be involved in a winning project, but maybe it will end up being a different challenge, as it is after all a huge adventure. You don’t get to feel the excitement of the Vendée Globe in any other race.

Who are your favourites in this year’s Vendée Globe?
My two favourite sailors are Jérémie (Beyou) and Kevin (Escoffier). I was so sad when I saw that Jérémie was turning back, as he had the best preparation possible for this Vendée and put so much energy into it that I feel he deserved to win. The Vendée Globe is an extraordinary race, which can also be very thankless. As for Kevin (Escoffier), I really believe in him. Even if he doesn’t have the fastest boat and is lacking solo experience, he really is the best all-rounder for this type of race. We all know that for him to be in with a chance of winning, the new foilers will have to have had problems.

Moving onto the Jules Verne… has the Maxi Edmond de Rothschild changed since she won the Brest Atlantiques a year ago?
Yes, she has been thoroughly upgraded in terms of aerodynamics and hydro-dynamics, here autopilots and controls. We have tried to make weight savings everywhere. It’s been a fascinating year as the room for progress with these boats is unlimited. That is vital, as the new machines will be arriving and we’ll become the oldest Ultime in the fleet after Actual. We all know that in general, new boats are always faster than the previous ones. The difference is that today it is above all the foils which give us speed, so we have the possibility of changing them.

Is that planned?
Yes, we have the second version which was due to appear this year, but it went behind schedule because of the lockdown. Meanwhile, we have understood a lot of things and we have already designed improvements above what we initially planned for the V2 foils. We told ourselves that it was best to take things slowly, particularly as there was no urgency in dealing with our competitors. Sodebo has not yet gone more than four knots above our speed. We’ll have V2 in place next year, and I believe that they will be well advanced in terms of their design.

Can you tell us more?
I can’t give you all the details, but the important thing is dealing with cavitation. At the moment, the peak speeds of these boats are more or less blocked by this phenomenon. We have to come up with foils capable of allowing us to take off very early at 27-28 knots and keep us there until 45 knots or more, but that is very complicated, because you reach a point when the foil is that bit too big to go any further because of cavitation. On top of that, the foils need to be self-stabilising, as there is no control of them, as this that would require too much energy. But we are making progress: previously, we reached the maximum peak speeds at 40-42 knots, but now we are up to 45 knots and we hope that with the new foils, we will reach 47-48. I saw the other day that François (Gabart) was aiming for fifty knots. In any case, the goal is to regularly reach average speeds in excess of 40 knots, while today they are between 30 and 40.

You said that the boat has been upgraded in terms of aerodynamics and hydro-dynamics. Can you tell us more?
To improve the aerodynamics, we have filled in the gap between the boom and the deck. We have extended the protective cover so that it goes right up to the end of the boom. We have applied a fairing to the mainsail traveller. Wee have also played around with the nets to try to cut any drag. As for the hydro-dynamics, we have worked on all the appendages to cut cavitation everywhere. There were little details to deal with where things meet up, the running edges, the trailing edges, how clean the surfaces are… The slightest scratch can proportionally have an enormous impact.

What gains in performance have you seen resulting from these improvements?
Upwind, it’s fairly impressive with a few knots or so: today, we are able to go from 28 to 30 knots when flying. And downwind, we have several knots extra.

What does the control system offer?
Performance and security. A lot of people are frightened of this. People say it is not sailing, but it is exactly the same principle, as we have had with the autopilots for the past twenty years: the autopilot regulates the direction, the control system regulates the trim, heel and the height at which we fly. The system requires a lot of adjustments. It’s not just a matter of pushing a button. It is down to the sailor to find the right compromise for his boat. Just like with a sheet or a car. You don’t push a button for them either. You must not think that the sailor no longer does anything.

Do you think it will be possible to fly all the time in the Jules Verne?
It takes 13-14 knots of wind to fly, so in a round the world voyage you get that a lot. What changes things really is that with 15-16 knots of wind from the NW, you can set off from Brest, which was not possible before. It is the same on the way back up the Atlantic: if you are sailing upwind but not too close to the wind, you can be at 31 knots. I have run through some routings based on statistics from 6000 routes over 15 years and even if it remains completely theoretical, 30 to 40% of these routes would beat Francis’s record, which is something I was not expecting. If you choose the right weather opportunity, you increase that probability. But your chance is reduced if you suffer any damage, as you know you will not be at 100% of the potential throughout the round the world voyage. So, you divide it by two or three, but because you can be much faster upwind and in light airs, that considerably increases your chances of smashing the record.

And the record would be beaten by how many days?
10 to 15% (out of the 6000) come in below 38 days, 10% at around 38-39 days and 10-15% between 39 and 41. What was remarkable about IDEC’s performance was that they managed to sail the boat at a hellish pace from the start to the finish and they took some risks. It’s an incredible record and finding that pace is going to be our challenge. There is of course the matter of reliability, as we must not forget that so far we haven’t manage to do more than seven days without suffering technical problems with the appendages. In the Brest Atlantiques, that wasn’t dramatic, but it did cut our performance by 10-15%, and that 10-15% is something we need to smash Francis Joyon’s record.

A good departure window is judged by the projected time to the Cape of Good Hope?
Yes, we are aiming for 11 days, or even less, and 12 maximum. The big difficulty it is to meet up with the depression off Brazil that will take you across the Indian Ocean, as Francis had. When we leave we are 8-9 days from this meeting point, and since it is a very dynamic, disturbed area, forecast and routing reliability is not so very good.

Let’s finish with the future: what is the next step in the program for 2021, Transat Jacques Vabre?
At the moment there is still a crewed round the world race planned in the Ultim calendar, in our head we are preparing for that, but we also know that we might end up on the Transat Jacques Vabre. And if we don’t break the record this year, we may be back again for the Jules-Verne next year, there are also other records that we are trying, the Atlantic, the 24 hours, solo, with a crew … but we still hope that there will be a race with all the boats including the new ones boats.

And in the longer term, is it solo for you from 2022 and then 2023?
Yes, at the start of the project, we decided that I would be on the solo programme from 2022, I really want this, I think about it a lot in the way I approach the boat. I’m lucky to be learning a lot at the moment and I am convinced that I will have all I need to perform well on the Route du Rhum 2022. And in 2023, there should be solo around the world, which is really the thing that I dream of doing.