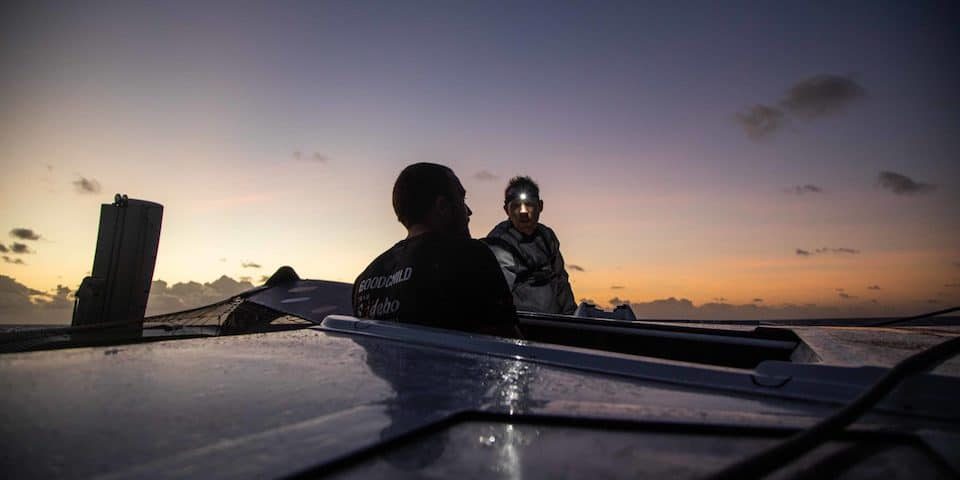 Big manoeuvres under way for the Ultims

Last Monday the Ultim 32/23 class revealed a change in governance with the departure of managing director Emmanuel Bachellerie, who will now devote himself entirely to the general management of the Brest Ultim Sailing company whose capital has evolved. The class itself should announce the new mode of governance in the first quarter of 2021 and also a proposed timetable for the years to come. Tip & Shaft tells you more.

A statement sent out on Monday by the Ultim 32/23 class announced the departure of Emmanuel Bachellerie from his post of Managing Director a role which he had since the beginning within the Ultim collective – created in 2015 – which became a class in its own right in 2018. “It was a concerted decision, almost expected since the creation of Brest Ultim Sailing [entity created in February 2018, with the initial objective of organizing Brest Oceans, a solo race around the world, Editor’s note], Bachellerie explains to Tip & Shaft. “I have been thinking for a while because I have given a lot in the last six years, but, at some point you had to make a choice. ”

The choice in question was to devote himself entirely to Brest Ultim Sailing, including his shareholding, initially shared between the boatowners, the class and the City of Brest, which has significantly changed this year: only Sodebo and Actual Leader actually still appear (majority), alongside … Emmanuel Bachellerie. “I was not a co-shareholder until now as I have become; Sodebo and Actual Leader support my approach, but they are not intended to remain in the majority capital, they have instead the idea to become in a minority, or even to leave like the others (Banque Populaire and Macif) who are no longer shareholders.”  And so they are like the 32/23 class which sold its shares in April 2020.

The ownership has been modified as Jean-Bernard Le Boucher, Head of the Maritime sector for Macif (1) confirmed – in spite of ending the Ultim programme, Macif renewed their membership for 2021 and will remain in the class until the sale of M101, the new Ultim built by Mer Concept: “Macif has withdrawn from the ownership of Brest Ultim Sailing, because our role was not to be both a race organiser and the owner of a boat competing in the event.” He remains vice-president of the Ultim class and as such told us (2): “It is for that same reason that the class has withdrawn, as its role is not to organise races.”

This withdrawal can also be explained by the fact that the goal of the Brest Ultim Sailing company has changed in relation to its original role, which was firstly to organise Brest Oceans in 2023. Emmanuel Bachellerie confirmed this, “Our business can now concern the organisation of ocean racing events, like Brest Atlantiques, for which Brest Ultim Sailing holds the rights and which deserves to be renewed, as well as working alongside projects, brands and local bodies, who are considering an investment in the ocean racing sector. We know that today Western France focuses on ocean racing, but part of the Atlantic coast, the Mediterranean shoreline and regions above or below us may also be interested in ocean racing.”

Will the organisation of Brest Oceans in 2023 remain with Brest Ultim Sailing? “The decision has not yet been taken. The aim is to build a serious and coherent project with an organiser,” replies Jean-Bernard Le Boucher. Emmanuel Bachellerie adds: “The class will be drawing up a programme for the coming years. Will the know-how and skill of Brest Ultim Sailing be considered useful when working with the Ultims? I hope so. But I cannot promise anything. It is down to the owners to decide what they require. I shall be supporting the first project due to be announced in January.”

One thing is certain. The class is still looking for new members for the two boats that are available today: ex Actual Leader – already sold, according to the previous skipper Yves Le Blevec but the new owner is no known yet – and M101, owned by Macif, for which François Gabart and his company, Mer Concept are trying to find some partners. “For the moment, we are contacted by people, but we’ll be working hard on this in January to find a buyer to ensure the boat remains in the Ultim class. To achieve that, a solid, definitive and coherent programme is necessary,” explains Jean-Bernard Le Boucher for Macif. He is pleased to announce that the sale of the former Macif to Actual Leader has been completed “at the price that was announced of 4.8 million euros excluding tax.”

To attract new members, the class needs to draw up its programme, define its goals and establish a new system of governance. “The timing would be right if we could announce all that in late March,” adds Jean-Bernard Le Boucher. It is clear that for 2021, the Fastnet Race and the Transat Jacques Vabre will replace the Round Europe race and the crewed round the world race due to start from Nice in the programme. “The round the world project with the City of Nice and Amaury Sport Organisation did not work out because of the COVID crisis, and this led us to contact the organisers of the Transat Jacques Vabre,” confirms the vice-president of the class. As for the Round Europe race, we are still thinking about that with Damien Grimont [who was to be the organiser, editor’s note] for the future, but for the moment, nothing can be firmly established.”

The Transat Jacques Vabre will therefore be on the programme with the line-up to include the new Banque Populaire XI, due to appear in the spring, Actual Leader 2 with a new rudder on her central hull, Yves Le Blevec told us. There will also be the Maxi Edmond de Rothschild, as the Managing Director of Gitana Team, Cyril Dardashti confirmed. As for Sodebo, which has just abandoned the attempt at the Jules Verne Trophy, “the programme for 2021 has not yet been defined,” we were informed. As for Idec Sport, Fabrice Thomazeau, Head of Marketing and Communications, told us that “the Transat Jacques Vabre is not on the programme for the moment.” With M101 and the former Actual Leader, if they find a buyer, six boats may line up at the start on 24th October 2021, Romain Pilliard on the former Castorama / Kingfisher 75-feet of Ellen MacArthur could also take the start.

The Notice of race for the double-handed transatlantic race is due to be published in January and will include an appendix with specific details and all the entry conditions (in particular a longer race course) for the Ultimes, which are invited, but not as a class. This was confirmed by the Race Director, Francis Le Goff: “It’s the same thing as for the Route du Rhum“. In order to ensure a level playing field, assisted drives, which caused a certain amount of discord in the past, are likely to be banned. “We are in talks with the teams, and assisted drive systems will have to be unplugged,” added Francis Le Goff.

What after that? That will be revealed at best later this year, but in any case will include the Route du Rhum in 2022 and Brest Oceans (the rights for which are held by the class) which, according to Jean-Bernard Le Boucher, remains scheduled for late 2023: “This is on the top of the pile on our desk. The race has to start from Brest at that date.”

(1) Jean-Bernard Le Boucher will be leaving his post as Head of Maritime activities for Macif in March and will leave the Group in June. He will remain an advisor and will stay in charge of completing the sale of M101. He has just been appointed President of the Figaro Bénéteau class (see the transfer market below)

(2) We contacted Patricia Brochard, president of the class, but she was unable to respond due to her very busy schedule late this week and left Jean-Bernard Le Boucher to reply to our questions.