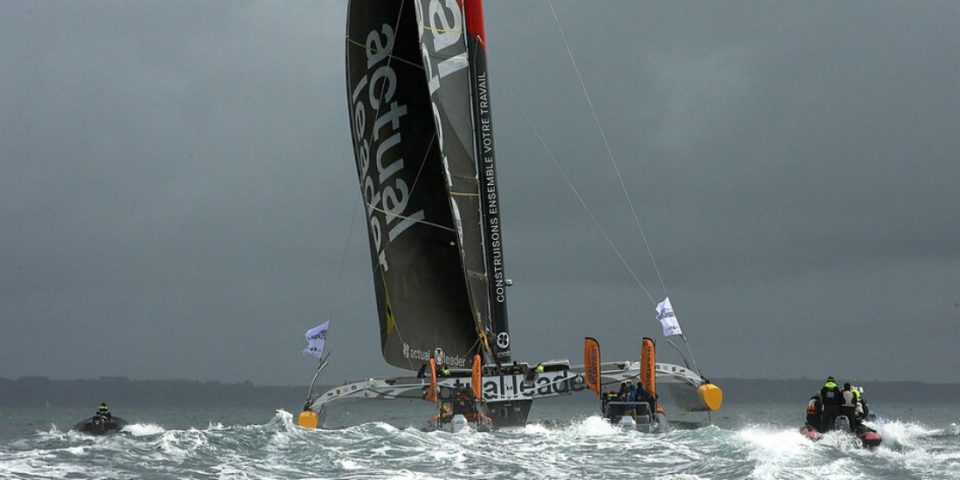 After the Maxi Edmond de Rothschild finished into Brest on Wednesday morning to win the inaugural Brest Atlantiques race, Macif and Actual Leader arrived Saturday, closing this first ever stand alone Ultim race is coming to an end. The course, Brest to Brest via a triangle in the south Atlantic, was unique and the double handed format, with a media man on board, was also different. Tip & Shaft makes a first analysis along with the input of skipper, organisers, teams and journalists.

Maxi Edmond de Rothschild, head and shoulders above their rivals.

Crossing the finish line on Wednesday morning off Brest, for the Maxi Edmond de Rothschild it is the first major victory in an offshore race since it was launched more than two years ago. Franck Cammas and Charles Caudrelier largely dominated the race,  taking the lead from the second night and losing the leadership only on the when they pit stopped for 13 hours and 40 minutes in Salvador de Bahia to repair the horizontal wing of the central board which was damaged by an OFNI. The Guillaume Verdier design is clearly the new benchmark for the Ultim 32/23 class. According to Cyril Dardashti, boss of the Gitana Team, “This victory gives us great pride because it comes after a lot of frustrations. When we took our decision to go for a flying, foiling boat some people laughed at us, while we were convinced we were right. Franck and Charles have shown that we were right. “

Between Robben Island and the finish, the rudder foil again showed weaknesses. Contrary to what could be written that was not following a new shock. The ongoing problem was the repair to the linkage carried out in Salvador de Bahia which did not hold. The complete part is more than 4 meters big controlling the rudder foils and it could not be brought in one piece on the plane to Brazil.

Even at that at the end of a race which in terms of miles is half a round the world, , the Maxi Edmond de Rothschild seemed to be in perfect condition and showed all of its potential over the three days before the finish, staying in step with the lows reach Brest with more than 1,600 miles in hand ahead of their two pursuers. Franck Cammas and Charles Caudrelier estimate that they “raced fully hard for 30% of the race and at 85% of potential over the remainder of the course.”

28 days and 23 hours earlier, the four Ultims had crossed the starting line in tough conditions generating some breathtaking action images. The media men pushed themselves hard and some sequences are truly memorable. But is the media report for the event up to what was hoped for? For Emmanuel Bachellerie, director of Brest Ultim Sailing, who was organizing the race. “The postponement of the start deprived us of two hours of direct live TV, but the general return seems quite satisfactory, in particular the work of the of mediamen and their content which, for some, made significant steps forward.”

For some the content was too plentiful, such as says Jacques Guyader, in charge of sailing at Ouest-France: “The mediamen have gone a little bit over the top. You have to be careful not to trivialize what a year or two ago was still truly exceptional, there is another year, especially the drone images.”  For Emmanuel Bachellerie, “These images have made it possible to discover magical boats. The 2 million video views seen on the only on the Brest Atlantiques media – that is excluding sharing and cross-posts – are for us a good level of satisfaction”.

In terms of live attendances, Brest Ultim Sailing reported 60,000 visitors to the race village during the ten days prior to departure. This is below expectations. Bachellerie said, back in September, that he hoped for  “between 80 000 and 120 000 people from the first to the last day of the race village”. The catastrophic weather over the period did not help. At the finish of Maxi Edmond de Rothschild on Wednesday morning, “The public were out there for the rendezvous, despite the cold weather and it was very nice,” notes Gitana’s Cyril Dardashti. Philippe Eliès, Le Telegramme writer adds: “The Brestois public are connoisseurs who are used to celebrating the finishes of solo round the world challenges. The Brest Atlantiques first name does not have the aura of the mythical Jules Verne Trophy and so let’s be honest, so there were three times fewer spectators. “

On the water the Brest Atlantiques remains a success. Three boats out of four are classified. It would not have been too much to have worried about not even completing the three podium places before the start. The Ultim class were on risky territory on this race after the serious structural problems on the last Route du Rhum which did not reappear. As for the abandonment of Sodebo Ultim 3, the latest Ultim launched, their damage is due to hitting an OFNI, and the boat is expected back in Lorient early next week.

But in saying that none of the top three Ultims on paper will not complete the course without stopping at least once. “I do not feel that these stops have affected the interest in the race. They have contributed to several re-groupings and that rekindled the sporting interest,” said Emmanuel Bachellerie. “For us, this is the ideal scenario, for there to be fights all the way to the end. We  could not have dreamed of more.” confirms Sandrine Bertho, Actual Leader’s team manager of the fight with Macif for second place, while both boats are expected during Friday night or early Saturday morning.

For Franck Cammas, the result remains positive: “The race was a successful, valid test because it was not an easy challenge for the boats. Yes we could have made a Transat Jacques Vabre, all the boats would have arrived at the finish without problems and we would have said: ‘Yes, it’s perfect, the fleet is very reliable.’ Here we did 30 days of sailing, in difficult seas at times, with compulsory crossing points. And what is more we were in race mode and so put the boats in danger, as  cannot choose its weather, contrary to what we have in a record attempt.”

So is the next solo round of the world race announced for 2023, is it still possible as a non-stop without assistance race? For Cyril Dardashti, “It never seemed desirable because there is too much interest in the game, in the speed where the boats are going and also the pit stop is a natural penalty”.  Thomas Normand, director of MerConcept, in charge of the Macif project, has another opimion: “What may not seem realistic today does not seem impossible to me in 2023. When we see the progress between the Route du Rhum and Brest Atlantiques in just one year it is very encouraging.”

UFO, the debate is open

The only boat that did not have a punitive collision with an UFO, Actual Leader, is also the boat with the smallest appendage surfaces. All the experts questioned consider that the shocks with the UFO are a key point to be considered for tomorrow. Still, the state of technology to predict UFOs is embryonic or poorly adapted to offshore racing boats. In Brest Atlantiques, only Macif was equipped with the beta version of the Oscar system developed by BSB Marine.

“Our technology has the ambition to detect an object of 1 meter by 1 meter within radius of 150 meters,” explains the company’s Gaëtan Gouérou, “At 45 knots the skipper has six seconds to react and so we cannot entrust such a reaction to the pilot “.

The cameras of the Oscar system, which also fitted to some Imocas during the Transat Jacques Vabre, see day and night, but only see what is lying on the surface of the water. Below the surface only the sonars are now effective, but their weight and their power consumption make them impractical for offshore racing. The Ultim 32/23 class plans to meet in January to discuss this central topic.

What programme for the Ultims next year, in 2020?

Only one event is scheduled for the calendar of maxi-trimarans in 2020: The Transat CIC. Discussions are currently taking place between the organizer OC Sport and the Ultim class to lengthen their course compared to that of the other three classes. “The Ultims are invited in a category of multihulls over 50 feet in which accepts all other multis” confirms Hervé Favre director of OC Sport. “As the solution of different starts is not right we will work on a course with a way-point to go to to ensure the finishes are grouped which is good for everyone. ” For his part, Emmanuel Bachellerie wants “Events need to remain understandable to the general public Nobody would understand that a rally car finishes in front of a Formula 1! “

Time in the boatyard is limited this winter for the Ultims who must really be ready by the end of March for their skippers to train alone. “It’s a race against the clock,” admits MerConcept’s Normand, “Before you make changes on the back of the data recorded during Brest Atlantiques, you have to make a very thorough check of the structure just because, nothing has broken it does not imply everything is perfect and there is no damage beneath the surface.”

The second half of 2020 will be a good time for record attempts. Not just the Atlantic in the west-east direction after The CIC Transat, but also around the world, that is except for Actual Leader who has no interest in this challenge.  Thomas Coville has announced his intention to go for the Jules Verne Trophy on Sodebo Ultim 3, with the addition of a wing on his central daggerboard to get more lift. While waiting for the launch of the new Macif in spring 2021, it is likely that François Gabart will also look for a good window. And the Gitana Team continues, with this in mind, to work on the adding and updating appendages which are forbidden by the Ultim Class but which are authorized in the framework of the Jules Verne Trophy.