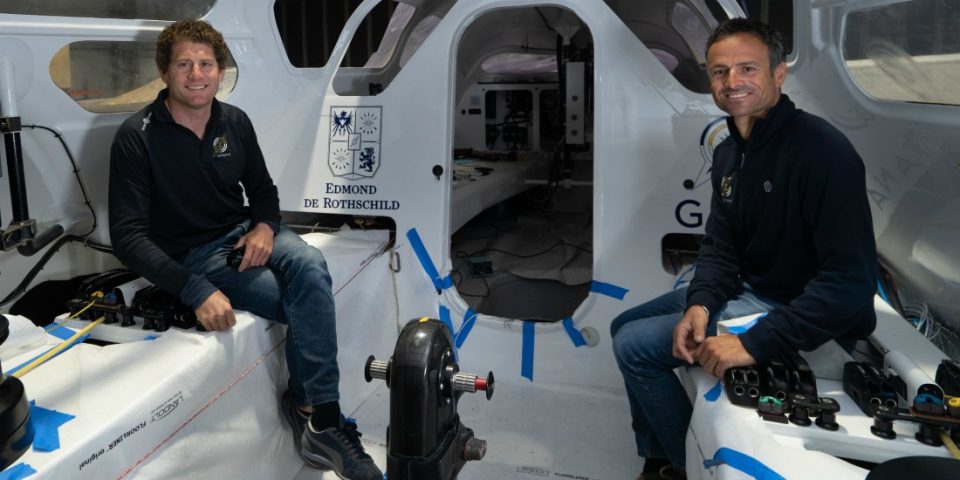 Cyril Dardashti: “The Combination of Charles and Franck will be the solution”

On Thursday the Gitana Team put an end to dockside speculation and announced that it is not one but two skippers who now succeed Sébastien Josse. They are both Volvo Ocean Race winners, Franck Cammas and Charles Caudrelier. They will share the skipper role on the Ultime Maxi Edmond de Rothschild. General manager, Cyril Dardashti talks to Tip & Shaft about their choices.

Before we talk about Franck and Charles let’s go back to the departure of Sébastien Josse. Really there was no explanation of ‘why?’, can you give us some background now?
This is not a subject on which I want to go into now. Let us say we wrote a great story for eight years together with Seb. Then we had differences on how we saw things. It’s like a marriage in some ways. In the beginning, everything is hunky dory but over the passage of time views are not necessarily the same. That’s what happened and that made managing the team difficult, hence the parting of the ways.

Was the abandonment on the Route du Rhum a factor?
Absolutely not. What happened we all take shared responsibility. We knew that the boat was young and that it was likely to have problems because of that.

This separation is not the first for the Gitana team, which might have a gained a reputation as a “consumer” of skippers when we compare it some teams like Sodebo, Macif or Actual who have the same for many years, why is that?
A few things: first, I do not know if we can say that having a skipper for eight years means that we are “consumers”, ours is already a good, long story. There was a period about ten years ago when things were a bit unstable so maybe we are still saddled with that reputation as a hangover for that period. But we are different compared to with Sodebo for example, our operation is different: on the one side we have a skipper who found and services a sponsor and he leads the project, on the other, Gitana, a stable which gives the ‘wheel’ to a driver. We see it as how it is done especially in F1. In F1, nobody draws that conclusions when they drivers stay one or two years in a stable.

Now let’s talk about the announcement made on Thursday: did you really contact anyone to succeed Sébastien?
Nobody ! When we announced our separation, the idea was to see what was out there in terms of candidates wanting to come forward themselves to be part of the history of Gitana and so go ahead and contact us. We were pleasantly surprised by the number of candidates and their level of motivation. We have the image of a closed, maybe insular team which is not quite true but we were happy to see that there was a real enthusiasm out there to join our project.

How was the choice made?
We had a number of criteria that I am not going to detail here. But for a start there were candidates who did not immediately feel able to go solo on this machine. For our project, we could not wait one or two years to train a skipper. When we were Archimedean (ie non foiling), it was possible to go from an Imoca to a large trimaran, but now there is a huge divide.

Does this mean that you had a short-list? How many were on it?
Yes, four skippers.

So bearing in mind what you have just said, in addition to Franck and Charles, we can reckon that the others were Pascal Bidégorry and Thomas Rouxel?
You can say that, but I am not going to name any one, because we have the greatest respect for all the people we saw and we do not want to generate ill feeling

How did you come up with the idea of ​​finally retaining two skippers?
We have a big deadline looming at the end of the year, the Brest Atlantiques, so we said we had to find a skipper and also a co-skipper. During the individual interviews, when asked who they would like to sail with, Charles very spontaneously answered Franck and Franck said the same, naming Charles. So there was a ‘click’. They both fit our criteria but for different reasons. We thought that this combination was the solution. When they were asked about idea, they looked a bit dubious but came back to us saying, “It’s not a stupid idea.”

Have they laid down conditions?
No, it just took a look at the program to see how it would work. Charles has a desire to race the Route du Rhum that he never done, Franck wanted to develop the boat, so that is how the schedule works and the allocation.

On paper two French winners of the last Volvo Ocean Races seems a dream casting, but they are hard driven individuals with their own ideas, is there not a risk of clashes? And who will decide in case of disagreements at sea?
I think this pair is a dream team which we could not form with two others. They are very respectful of each other, and as contemporaries have had a respectful relationship for many years and are very close in private life. In the individual interviews we had with them, when asked if they could be co-skippers to the other, they both answered yes. As for the second question, they both agreed: in case of differences, Franck will have the last word in 2019 and 2020, Charles after that.

Just looking at it from a material point of view, two top class skippers instead of one must cost much more…
Yes, of course. Having said that, is it more expensive having Thomas Coville with someone like Jean-Luc Nélias to prepare a project? I’m not so sure.

Talking about the budget, you recently said that on the contrary to what people may think, you don’t necessarily have the biggest in the Ultim class. How much do you have?
We have a budget of 3.5 million euros (ex VAT) to run the boat per year. It’s true that it is rather annoying at times that people think that because we represent the Edmond de Rothschild Group, we are able to spend huge amounts and that we have the biggest budget, but that is totally untrue. We run things rather prudently and each euro invested needs to be justified and yield a return on the investment.

You recently joined the Ultime 32/23 class. How do you position yourself in relation to the class?
We joined the class, because we wanted to take part in fleet races, but to be completely honest, we don’t have the same way of thinking as the other members. I don’t think they share our desire to fly and innovate. People try to prevent us from doing that by using arguments to do with the finances, but it is simply not true that we have unlimited resources. Today, we are that quite some way ahead, as we have been working on that question since 2013. I think that really annoys some people. We said we would conform to certain rules, even if that blocks us in terms of development, while working towards a record breaking campaign to continue that development and in particular work on how to adjust the foils, which seems vital to us if we want to fly offshore and remain stable and consistent. Foil controls are certainly not as expensive as a new set of foils.

Talking about the boat, when do you intend to relaunch her and what did you do during the winter refit?
We hope to get her back in the water on around 20th May. We did a lot of work to ensure her reliability by strengthening her bows, as we realised we had underestimated the structural needs. We didn’t think we would reach such speeds in such heavy seas, but now we have seen that, so we corrected that during this refit.

How do you feel about the new Sodebo? Have you seen her out on the water?
We haven’t been to see her yet, but that doesn’t mean we won’t. I’m pleased that there is a new Ultime. I think what they have done was daring. Now, we’re going to have to see how she does…

To finish, let’s look at your goals. You took part in two transatlantic races, the Jacques Vabre and the Route du Rhum, where you encountered technical problems. Is your owner piling on the pressure to get some good results?
We were very ambitious with this boat, and now we realise that everything we develop is being copied by the others: the daggerboard wing, the rudders which can be lifted up with their casing, everything to do with flying… that shows we are on the right track. Having said that, when you are a pioneer and bold, you have to accept that sometimes you run into problems. We have had our fair share and it is painful. But that means we can bounce back to be better and in the next few months, we hope to win races. I am convinced we will and I believe that our partner shares that outlook. If you are talking about pressure, we pile it on ourselves every day.