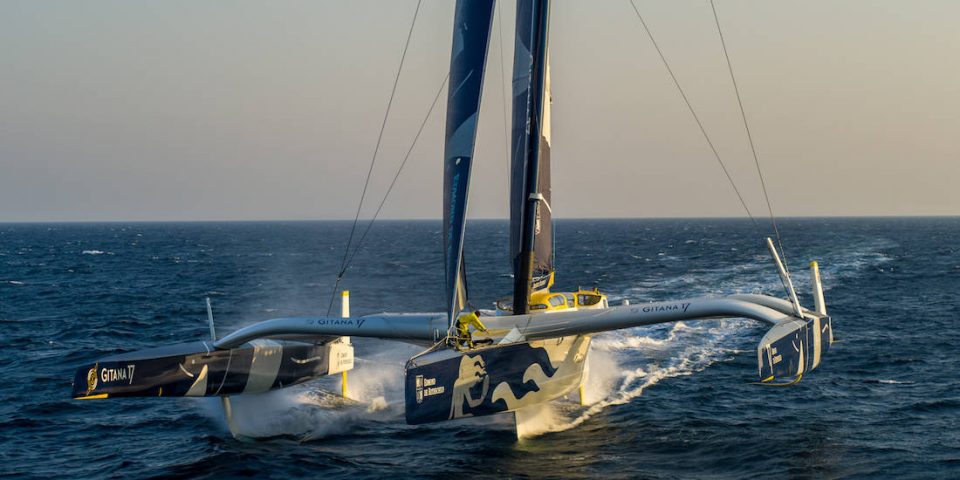 Franck Cammas: “We tick a lot of boxes”

The Maxi Edmond de Rothschild, considered by many to be the favourite in the Ultim class on the upcoming Transat Jacques Vabre, suffered foil damage during training last week out of Port-la-Forêt. Despite the start date being exactly a month away, November 7th, this setback does not seem to worry Franck Cammas, co-skipper with Charles Caudrelier, as Tip & Shaft’s discovers when we caught up with him this week.

Can you explain to us what happened to you during your training?
We hit something with the starboard foil, we weren’t going very fast, at 22 knots upwind, but it was pretty violent, one of the hardest collisions we’ve had with the boat in the last two years. The tip was damaged for about 30 centimetres right to the core structure, it also exploded of all the layers on the vertical part of the shaft because the foil twisted on contact. It needs about three weeks to repair it, but what is positive is that we did not damage the core structure too much, if the impact had been harder we might well have lost the foil, or part of it.

This is a big setback to your preparations?
Actually what troubled us more was not being able to complete that training course, we would have liked to be able to compare our performance downwind in the breeze with the new boats. And now it rules out the whole team’s activities for 7 days a week, until October 25, to fix that blessed foil. But beyond that it that did not stop us from sailing, and anyway, apart from final small adjustments to the pilot, we had finished our preparations.

Do you have a spare foil just in case?
Yes, we have our V2s, we have already tested the port foil, we still have a little work to do to finish the starboard. But this V2 is not yet fully developed, it requires adjustments that we have not yet been able to complete, we prefer to make these modifications before using them racing. So it is very important that we repair the damaged foil to be able to leave with the V1. We really want to retain the option of using one or the other until the last moment.

“We improved the cavitation problem
by almost five knots”

Tell us about this V2, how does it differ from the V1 and what are the objectives?
In terms of geometry, there are quite a few new things: more aspect ratio, with a more open radius of the curve, the shaft does not have the same curvature at the bottom end and it has new sections. There were three objectives: the first is to reduce cavitation. On our first foils, it’s something that starts to happen just below 40 knots and becomes noticeable at 43-44. With the new ones we have gained 3-4 knots. The second objective is to make gains in terms of drag globally, especially at high average speeds, which are important to us, say around 30-35 knots. The third is to lift off a little earlier, hence a bigger tip surface in particular, which gives us on paper one or two knots of take-off speed. These three objectives are close to being achieved on our first trials although there are other issues that must be resolved before being able to use these foils.

What other major changes have you made on the boat compared to last year?
We have a new ‘skate’ wing, the lift end plate under the daggerboard, installed a month ago and the chances are we’ll go with it on the Jacques Vabre. Here again, the first big objective was to gain in the cavitation but also to increase our vertical lift a little. We have improved the cavitation problem by almost five knots, which will be very positive at high speeds in terms of drag. But also in terms of reliability, because cavitation destroys the skins: before for us it degraded the outer layers of carbon so much because of the vibrations.

Let’s talk about the competition, what do you think of the two Ultims launched this year, Banque Populaire XI and SVR Lazartigue?
In terms of design I think they hit the nail on the head. They are well balanced, they go fast quite easily. In aero terms they have obviously made a lot of progress compared to their old boats, and on the appendages, we see that in terms of the sizes, foil surfaces, wing and rear load bearing foils we are converging into the same areas. When we see them lift off, they have a very nice attitude, at least on flat seas, their centre of gravity seems a little more advanced than ours compared to their positioning of the foils, let’s see what will happen in bigger seas. We have the impression that we could not go much further than where we are, they are a little step ahead, there is perhaps a little risk, but it might also pass, that will also depend on the proper functioning of the load-bearing aft foils. But overall in terms of speed, I have a feeling that fundamentally no one stands out, we’ll be pretty much playing on a level playing field, and that is good for the class.

What about Sodebo and Actual?
Sodebo is a bit different in terms of their balance, their sail plan, their appendages. He was one of the fastest downwind in the breeze during the course, which is a bit his favourite point of sail but he has weaker points in anything close to and upwind and he looks a little bit of a handful between Archimedean speeds and flying. Losing waterline length with the shorter floats is not going in the right direction, it is the same with the rudders: the more you advance with them, the less they allow you to control the boat as it is starts flying. So I think he will be weaker in getting flying and upwind. As for Actual, she has no very weak points, she is a good, reliable boat, which is not so comfortable upwind, power reaching and in the breeze.

Everyone seems to highlight you as Jacques Vabre favourites, what do you think?
Let’s say we tick a lot of boxes, having an older but capable boat and a crew that knows it well. Even if it is difficult today to imagine that we will all have our boats still at 100% after 15 days, it is not just because new boats still require fine tuning that they are bound to have problems. On the course, SVR did two days in decent big seas and breeze, everything was going well for him.

“The Jules Verne is a technical adventure”

You then move on to the Jules Verne, what is the ideal timing?
If we are on stand-by on December 25, having refurbished the appendages which will certainly suffer during the Jacques Vabre, we will be happy. That gives us a stand-by period but half of the usual window, but last year we left on January 9 and had a good option

Do you have the impression that because of the collision problems you are having, the record becomes less achievable?
Not necessarily because the more we get through these problems, the more we become more reliable. Today, of course, we have appendages that cast a wider net because they are horizontal, with 4 meters out from the sides and 2 in the middle, whereas they were all pretty much vertical before. We also know that a round-the-world passage with flying boats and all the systems that go with them has never been done before, it is inherently a technical adventure. But you also let us remember that with Groupama 3, we got there after three attempts.

From next year, the project goes into solo mode, with the Route du Rhum then the race around the world in 2023 for Charles, are you going to take a step back or do something else?
No this is how it was planned from the start and my role will not change, I will be helping Charles to the best performance on the Route du Rhum and around the world solo. Beyond that I obviously still very much want to sail it just won’t be on Gitana on the race program, maybe I can still race in other series, more inshore, I think. But today it’s not on the agenda at all.