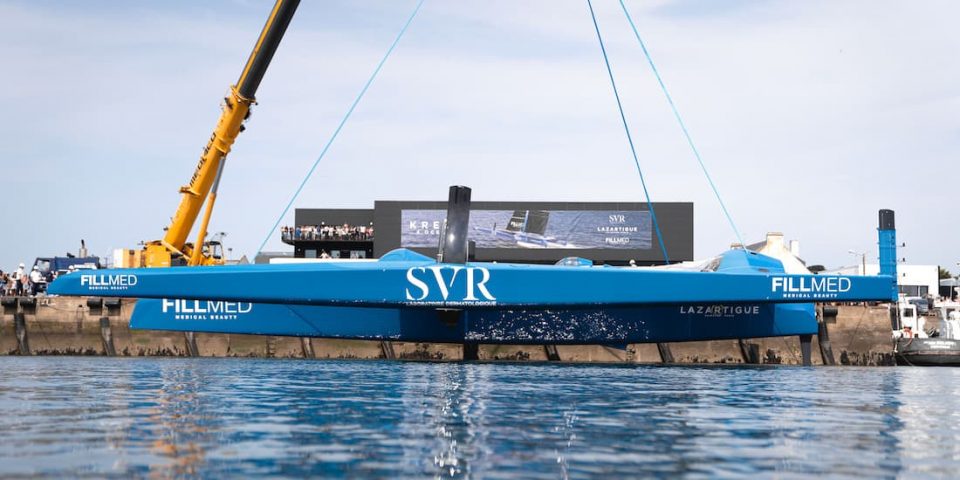 Gabart: “Saving 5 to 10 days on a round-the-world passage is definitely possible”

SVR Lazartigue, François Gabart’s new Ultim, was launched last Thursday in Concarneau in blazing sunshine in front of a large crowd. Born as M101 the new giant was known for a long time only by this code name after the withdrawal of its initial sponsor. The VPLP design is the result of 150,000 hours of work and is characterised by its strong design choices. It is, in essence, a radical but very carefully conceived concept, just like its skipper who was very involved in every stage of the design. Here is our take on this newest generation Ultim.

It was actually back in June 2017, just before The Bridge race started that François Gabart who was then skippering the two year old Macif (which was M100 and is now Actual Ultim 3) started the first drafts of M101. Logically he went to VPLP who had designed M100, but also to Guillaume Verdier, designer of the freshly launched Maxi Edmond de Rothschild who then did the Imoca Apivia, which is project managed by Garbart’s MerConcept.

“In this kind of project, you don’t decide things on a sketch. Rather we choose the overall approach, the investment that everyone is able to bring to the table,” says the skipper, Gabart, who decided to continue his collaboration with VPLP: “They have brought in a bunch of other players, such as Gsea design for the structure, North Sails for the aero as well as Artemis Technologies [which spun off out of the Swedish America’s Cup programme Artemis Racing, Editor’s note]. “All of this environment was vital,” specifies Antoine Gautier, director of studies at MerConcept, who is in charge of the design team.

At this early point, Macif only gave the green light for preliminary studies. François Gabart was yet to set his round the world record and no one really knew if a multihull can fly on such a round the world course. However, the instruction was to explore all the possibilities, including that of a catamaran. “Catamaran or tri, we often see it in as binary choice but there are a lot of intermediate stages in between and it is true that a catamaran with a central pod, Decision or TF 35 style, was tempting,” explains Gabart.

In the end, the cat idea was abandoned “particularly for security reasons,” explains Xavier Guilbaud, who is project manager at VPLP: “It’s safer to have the main volume in the middle in which to take refuge. And while the catamaran can be very fast when it flies, it needs to always be at 100%. As soon as you are any kind of degraded mode you have both hulls in the water.”

And so in February 2018, on the strength of his solo round-the-world record of 42 days, François Gabart got the green light from Macif to launch the M101 project properly. The construction of the trimaran started, the central hull at Multiplast, floats, foils, fore and aft arms at CDK Technologies, assembly and integration at MerConcept.

Three years later, the result is obvious, very slender with very fine bowed floats – at least at what the Ultim rule allows (220% of the displacement) – powerful with its rigging set up, the new SVR Lazartigue poses an obvious first question, why the lack of a cockpit, which is really down in the lower part of the main, central hull, under the two small bubbles, like a fighter plane.

The abiding obsession with the aero

The lack of a coachroof and deckhouse reflects her skipper’s obsession with aerodynamics. “It was clearly the area where we could make the most gains,” says Antoine Gautier. “The most important thing was to remove the coachroof and cabin. François is a free thinker and tends to believes the guy should adapt to the needs of the machine!” And so, like in the newest IMOCAs how to steer the Ultim without having to be outside?

“We have two small kart type steering wheels which hydraulically control the rudders which are mechanically linked to one another,” Gabart explains bluntly. A crew member will be stationed outside at the back – where there is still a steering wheel – ready to take over if required!

Gabart, the SVR Lazartigue skipper defends his option: “In the end, it is not very different from what exists in IMOCA where you cannot see anything under the coachroof- not to mention the configuration of Hugo Boss. In a glider which is nevertheless very delicate and precise to handle, the pilot is also locked inside. Solo anyway there is such a fine line between actually steering and piloting. It often comes down to tapping on the controls while managing the mode and trajectory.”

Beyond the gains in mass and centre of gravity, the main benefit of this option lies in the lowering of the actual sail plan. On board SVR Lazartigue, the mainsheet track even curved downwards in the center so that block to block the boom can be at actual deck level. “We have the same basic sail plan as on Banque Populaire XI, but we have it positioned 1.20 meters lower,” explains Xavier Guilbaud.

A comparison between Gabart’s new SVR Lazartigue and the new Banque Populaire XI which was launched three months earlier and designed by the same architects is required. The two new Ultims have the central hull rudder, fin and the float rudder elevator system in common,  they don’t come out of the same moulds and their design differs on several points.

Compared with the curved arms of Banque Populaire XI, François Gabart preferred a parallel structure with arms in a single part “which limits the joins and is more reliable“, underlines Xavier Guilbaud. Above all, the arms are much less “butted” (less curved upwards) on SVR Lazartigue, reflecting the idea that the boat should spend more time flying the air than sailing in Archimedean mode. “It is structurally more interesting for the transmission of forces and it allows better care of the aero by avoiding the ‘toboggan’ effect of the tarpaulins and nets behind the sticks,” explains the architect.

Unlike Team Banque Populaire, which had to reuse existing tools to stay on schedule, MerConcept – which started its project a year earlier – opted for floats assembled hull to deck and not using half-hulls. This method which makes it possible to avoid any excess lamination in the most stressed area. SVR Lazartigue‘s shorter floats could be cooked in the CDK Technologies autoclave at 7 bar pressure, an additional guarantee of careful construction.

With its additional meter (at the maximum of the rule), very enveloping larger floats and a particularly reinforced front arm structure, Banque Populaire XI is published to be 16 tonnes when SVR Lazartigue claims one tonne less on the weight scale. “We didn’t experience the trauma of Armel’s capsizing,” recalls Antoine Gautier. “There was a lot of talk after that accident, but we didn’t feel the need to go as far as they did in some structural areas.”

This does not prevent M101 from being “more powerful and heavier than M100,” says François Gabart. How much ‘mum’s the word’ smiles the skipper who concedes, “What is true, is that Gitana 17 undoubtedly keeps everyone to a minimum their weight [officially 15.5 tonnes, editor’s note]. From the moment we manage to take off the question of mass is less important. Ten years ago we were wondering how to take off so weight was the big obsession. Today, that is far from the only criterion. But in saying that if we can save 10 kg in weight I still take it, everytime.”

A new generation of Ultims

In many ways SVR Lazartigue seems to embody a new path for a new generation of Ultims. For François Gabart, naval architecture is not a “fixed stable area”: “When the M100 was launched in 2013, we were heading towards flying but the America’s Cup was not there yet and no one knew if we could build foils capable of withstanding these loads and efforts. Since then we have learned a lot and the ambition for M101 is to fly all the time. I do not like to give figures because they devalue the revolution we are undergoing. Under certain conditions, the gains are gigantic. I’m not saying it’s going to be easy, but saving 5 to 10 days on a round-the-world passage is definitely possible. And the Atlantic in less than three days, we have the rights to dream about that!”

Despite the innovation underway on these machines, the question of their vulnerability to Ofnis (Unidentified floating objects) remains a fundamental question as the recent loss of the central rudder of Gitana 17 shows. “The boat will be equipped with Oscar, which continues to improve, but there is nothing very much which is new on that subject today,”admits Antoine Gautier. And Gabart concludes: “With the increase in speed, the weather factors becomes less random. On the other hand, the risk of damage to the boat by an impact with an Ofni increases. It remains to be seen whether how these odds stack up.”