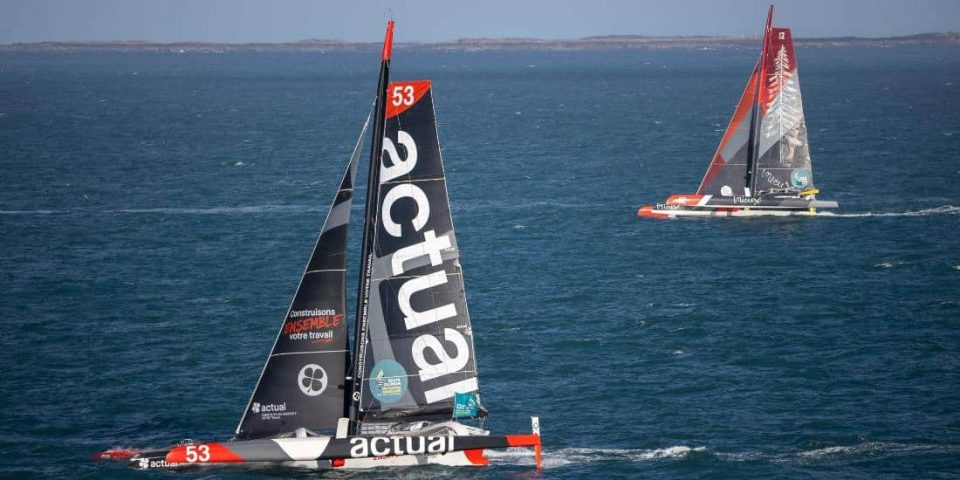 The Ultim Class on the rebound

At one year before the start of the Arkea Ultim Challenge-Brest which will start on January 7, 2024, the Ultim class has appointed a new general secretary, Stéphane Guilbaud. It is a good chance for Tip & Shaft to take stock of the priority issues awaiting the latter.

After Emmanuel Bachellerie who was the General Delegate from the beginning of 2018 to the end of 2020 and Jean-Bernard Le Boucher, Chief Executive Officer in post from July 2021 to April 2022, the date on which – we have had it confirmed – he resigned, it is now Stéphane Guilbaud who has been charge of the operational management of the Ultim 32/23 class as general secretary since January 9th

In the world of competitive sailing, Guilbaud is far from being unknown. He accompanied Franck Cammas for nearly twenty years through the Figaro, Orma, Groupama 3 and Volvo Ocean Race etc, before working with the Spindrift racing team and the French SailGP team where he was team manager in 2019 during the first season. Since then he has been working in real estate in Portugal where he took a phone call during 2022.

“I was asked if this position might interest me. I answered yes, I went through a battery of tests and interviews. That was the first time in my life that this had happened to me. And finally, in December, I was told that it was all good.” He recalls.

The appointment was made on January 5 at the end of a process which started “before last summer”, according to Emmanuel Bachellerie who is the co-founder of the company Ultim Sailing and who is the only member of the class who agreed to respond to our requests this week.

“Each of us thought of appropriate people and that allowed us to make a long list of about twenty names which we whittled down to two or three. We discussed things with the interested parties and we chose Stéphane, who not only has a very broad vision of what our machines are, but also a very strong motivation and a career that speaks for itself.”

Yves Le Blevec, who is now the manager of the Actual team (see below) is in full agreement: “Stéphane knows the job perfectly and the environment of offshore racing. He is neither a racer, nor a boat owner, nor an organizer, and he does not have the ambition to be any of these things and that is  very good! We will be able to move forward from here coolly and calmly.”

A program to relaunch

And so what is the new general secretary’s roadmap for the class?  “It is the same as my predecessors, that is to say, first of all to organize a programme which is a little more ambitious than what there is existing at the moment, then to have as many boats as possible to take part to programme.”

It is a real challenge for a class which, since its creation, has never really succeeded in delivering a solid programme over time, due to the sometimes diverging interests of its members.

The postponement of Lorient-Bermuda-Lorient, which was to take place next May, is a good example of this. “Given the amounts that we had requested from the communities we expected to be able to offer  a certain media value in return really, at least, if possible a year upstream and with a sufficiently number of boats,” says Jean-Philippe Cau, president of Lorient Grand Large, the organizer. “Given the problem of the class and François Gabart’s team last year, we had compromised on December 15 as the deadline for entries. In the end, we only had three [Banque Populaire XI, Actual and Sodebo Ultim 3, Editor’s note], and that was not enough for the event as we wanted to do it, so we decided not to pursue this edition.”

The project as a race is not entirely cancelled, however.  “Just yesterday (Wednesday), I started talking to the new secretary general,” continues Jean-Philippe Cau. “The state of mind has changed, it seems that the members are falling in line more with the class and not the other way around. So if everyone works together, this race could take place in the future knowing that it would not only be for the Ultim class, we would like to attract MOD70s.”

The 2023 program currently only includes the Fastnet and probably the 24H Ultim, the second edition of which should take place at the end of September in Lorient. “The idea is to make this event annual and that Finistère Atlantique run on a biennial basis”, confirms Emmanuel Bachellerie, whose company Ultim Sailing is the organizer of these two events.

Stéphane Guilbaud is working on things and is confident: “The idea is to create an annual championship with two or three “small” crewed and solo races, which would take place over a weekend, and two medium/major races, one with a crew and one solo, plus our race around the world every four years.”

The first ever solo Ultim race around the world, the Arkea Ultim Challenge-Brest, will start on January 7, 2024. But with how many boats at the start? The agreement between the class and the organizer, OC Sport Pen Duick, requires a minimum of four participants, there are five registered to date: Charles Caudrelier, Thomas Coville, Armel Le Cléac’h, Eric Péron, who charters the ex Mieux from Ultim Sailing, the boat on which Arthur Le Vaillant raced the last Route du Rhum, and… Anthony Marchand, who succeeds Yves Le Blevec on the helm of Actual who becomes the team’s manager.

An official announcement was published last Friday, at the end of a long period of reflection which according to Yves Le Blevec, started a year ago: “Since the beginning of my story with Actual, I have tried to ask myself as truthfully as possible what I can best offer my partner to maximise the success of the project. That involves improving the performance of the boat, which we will do in 2023 with a major evolution which will be communicated later. But last year I also said to Samuel Tual (CEO of Actual) that we could also review the pilot. On the Route du Rhum I felt legitimate to compete, but for the round the world race between the preparatory work to be carried out in part and Antho’s desire and ambition that I know, I thought it was a good time to make the transition.”

The 2023 season will be blessed with some fresh air in the form of new faces. As well as Anthony Marchand and Eric Péron who is currently is looking for partners for a budget which he estimates at around 1.5 million euros there is also the possible change to the helm of SVR Lazartigue. Increasingly insistent rumors, including some fueled by other skippers in the class (see our interview with Thomas Coville), are pointing to the arrival of Tom Laperche in place of François Gabart.

Asked in December by Tip & Shaft, the winner of the Solitaire du Figaro 2022 did not wish to comment, but underlined his desire to continue in the Ultim. And MerConcept says there is “no communication planned to date”.

Whoever the skipper is, his eventual participation in the Arkea Ultim Challenge-Brest will depend on the resolution of the conflict between the class and the SVR Lazartigue team on the trimaran’s compliance with the class rules. It is a thorny topic but progress seems to be being made, even if everyone kicks for touch when it’s mentioned.  “I’m taking over that file, it’s heavy, but for the moment, we’ve decided not to talk about it,” replies Stéphane Guilbaud.

Emmanuel Bachellerie agrees, adding “In November we received an answer from the ultimate arbiters (an interpretation of World Sailing on the real plans of the boat), which made it possible to open discussions with François’ team, and so we ardently hope we can progress.”