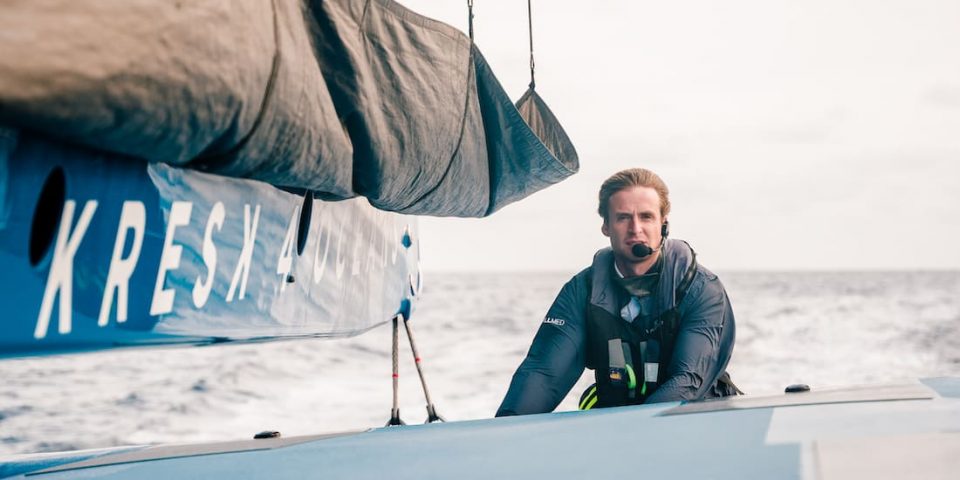 Tom Laperche: “The Ultim is the pinnacle of the discipline”

After an impressive 2022 season on the Figaro Beneteau circuit which was marked by four victories from four solo races, including winning the pinnacle Solitaire du Figaro and the title of French Elite offshore racing champion, Tom Laperche is preparing to compete on The Ocean Race with the crew of Holcim PRB before he then continues the 2023 season on François Gabart’s Ultim SVR Lazartigue. That is quite the programme for a 25-year-old sailor who talks to Tip & Shaft.

► Well it would be true to say you have emerged from pretty much the perfect Figaro season?
Yes, that was a season that I’m super happy with, I took a lot of pleasure in reaching this certain level of maturity on a demanding circuit, getting to the status of being a leading contender and then winning several victories, in particular the Solitaire du Figaro. The level that I managed to get to both on a technical level, in the manoeuvres, the choice of sails and the speed, as well as in the strategy and the management of the fleet left me very satisfied.

► Did you feel yourself in that kind of state of grace with a continuous impression that everything was rolling your way, everything was working out well for you?
Yes, I have thought about that and I suppose I really felt that state of grace in all the races of the season, everything went very well almost every time. It’s a result of hard work, a little bit of the status you acquire as a favourite in the fleet, which means that when you change your sail or choose an option, others do follow suit, but along with that the planets align well.

► Despite this very tidy performance, you weren’t nominated among the short list for Sailor of the Year title, were you just a little bit surprised?
(Chuckles). Of course it would have been great to be nominated after having won all the solo races in the Figaro and also the title of French Sailing Federation’s French Elite Offshore Racing Champion, but even more so now I don’t know what criteria are which are taken into account, I do not understand everything. But it’s no big deal, I still received a reward for La Solitaire, and there are others who have never been elected Sailor of the Year, like François Gabart.

► What is your assessment of your four years on the Figaro circuit? Did you imagine when you started out in 2019 you could get to this level?
Well, let’s say that I had dreamed of it, especially since from the start, it went really well, I got some good  results quite quickly and on the water, I saw that I was doing the right things, and above all, that I enjoyed it, I liked that. So I hoped to get the best out of this circuit, but even from there to do as well as I have this year it is a bit of a dream come true. The results are super positive, I learned a lot of things, I met people, it allowed me to get a certain recognition, it opened doors left right and centre.

“The Ocean Race will be
an exceptional experience”

► So that is the Figaro circuit done and dusted for you? Are the days gone when sailors stayed ten years or more on the circuit?
Yes, the page is turned for the foreseeable future, especially since I think I have reached the top, so I feel quite move on and embark on new projects. I couldn’t see myself staying in this class for ten years. I think that ocean racing has evolved quite a bit in recent years. Before there were a lot of sailors who came back to race the Solitaire year in year out because it was quite easy to repeat the programme time and again and because other classes were either inaccessible or less developed. Today, the Figaro remains a class where there is a high level and an extraordinary fight because it’s one design, but now it is true that we stay there for less time, it is in any case a great circuit fot learning.

► Let’s talk about the future. Right now you are heading into The Ocean Race in a month’s time on the crew of Holcim PRB, how did you find yourself getting involved in this next adventure?
We had a lot of discussions last winter with Pascal Bidégorry who joined us for a bit at the Bretagne CMB programme with Gaston (Morvan) and I, it was very productive. I also knew him because he was with François (Gabart) from time to time on SVR Lazartigue, things were always good with us. One day, he started talking to me about The Ocean Race, he talked about me with Kevin (Escoffier), they discussed it with me just before La Solitaire and they made me a proposal at the end of September.

► Did you say yes right away?
Yes, because it will be a really extraordinary experience, which is a big change from what I have done before. If you like sailing and ocean racing, you can only be attracted by the prospect of racing round the world. I want to see the Southern oceans, there is also the whole idea of travelling which attracts me a lot, I will go to Cape Verde, Cape Town, Itajai… And all in an Imoca with a great crew.

“The notion of flying is fascinating”

► Have you had time to prepare?
I did a spell at the beginning of October in Port-la-Forêt with Kevin and some of the people who could potentially be on the crew, it was rewarding to learn the boat especially as my experience of the Imoca is very limited. It is clear that we have only trained a very little, but we are all almost in the same situation: apart from 11th Hour Racing which has really had this objective in sight for a few years, all the boats have done the Route du Rhum and team members are arriving from other projects. Despite all that, I think we have everything to perform well in an edition that is a bit of a transition, with five boats. We will have to find the right rhythm, the right balance between working with as crew, as we have known so far on the Volvo, with a lot of changes of sails and manoeuvres, and these Imocas with foils which go faster and we’re going to be a crew of four, plus a media man. We will learn as we go along. And we know on this race, it is often the team that progresses the most that wins.

► You told us two years ago that your long-term dream would be to do the Vendée Globe, can this experience allow you to get closer to that dream?
Today, it’s not the priority at the moment, at least not for 2024. For 2028, it could be a good objective, so inevitably, this experience in Imoca on The Ocean Race and going seeing the South has to be a positive. Now, it will really depend on opportunities: when I see what happened for me between 2019, when I was still in school, and now, it seems very complicated to me to tell you where I will be in six years time!

► Let’s finish with the Ultim, you’ve been sailing regularly on SVR Lazartigue for a year and a half now, what do you like about it most?
It was great to be involved in the first tirals under sail of the boat last year, then to do the Transat Jacques Vabre with François. That will remain an incredible memory. It was a great race during which I took great pleasure in discovering and improving the boat. There is not many classes or situations where you come back from each sail with such a smile. The sensations are extraordinary and the notion of flight is fascinating. As soon as you make a small change in the settings you see it immediately on the speed of the boat. Ant that is not a tenth of a knot, like in the Figaro. I also discovered life with a great company, MerConcept, with a great organization, a lot of skills, human relationships, that all makes me want to continue here.

► And so that begs the question what’s next for you? Rumors abound whether François Gabart wants to continue sailing solo or not, and your name is often cited as his successor, is that close to the mark?
I can’t say very much at all about this, the program for next year and the years to come is being defined. But of course I want to continue sailing on this boat. In terms of single-handed offshore sailing, I’ve always said that the Ultim was the most challenging, it is the very pinnacle of the discipline, so that’s what I dream of doing.