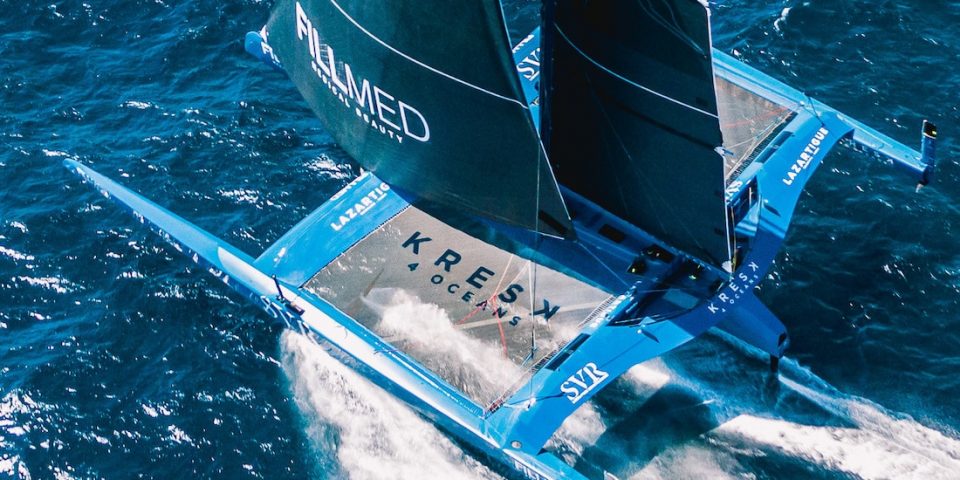 A little over a month after the launch in Concarneau, of his new Ultim SVR Lazartigue François Gabart takes stock of his first sails aboard the giant trimaran on which the emphasis was focused heavily on aerodynamics.

Since SVR Lazartigue was launched, how much have you been able to sail and in what range of conditions?
We have sailed six times making a total of almost 2,000 miles that is including twice for two nights at sea. On the second of these we had 25-30 knots for an hour with a swell of about 3 metres otherwise the vast majority of the time it was between 10 and 25 knots. The difficulty when you discover such a boat is that you have to step things up gradually but you still push it, you still test it. Especially since from a purely contractual point of view the sale [of Macif to the Kresk group, Editor’s note] is effective from today [the interview took place on Wednesday, Editor’s note] and could not be validated until after this testing period. For insurance reasons we were confined to a restricted area and we couldn’t go out in, say, 50 knots of wind. But it was fine enough to get to know the boat and if there were any parts that might break because they were not so well conceived, designed or built, it was best it happened there. But really we had few breakages at all and really no major problems, which is always reassuring, because when you put a new boat in the water, you are never 100% sure. Of course that doesn’t mean we’ll never have any problems, there is still a lot of work to do for the boat’s long-term reliability.

Who have you sailed with?
Tom (Laperche) did almost all the sailing so far and of course there was our technical team, the designers and the sail and rig people but also external guys like Pascal Bidégorry who of course is historically very close to the project and is part of the 11th Hour Racing team which includes Charlie Enright and Mark Towill.

What were your first impressions?
This boat has extraordinary potential, but there is a lot of work to take advantage of it, to find the settings and to make everything reliable. This week I was discussing with Nicolas Goyard, the iQFoil world champion that when we see the performance gaps in that fleet, of the order of 10 to 15%, that they manage to generate compared to their competitors in a relatively one-design class, you can see that simply with different settings, the performance differences are proportionately greater. So imagine what it can be like on our boats which are extremely complex prototypes – I couldn’t tell you the number of combinations of settings that exist between the different configurations of sails and all the on-board systems. Suffice to say there is enormous potential for development, I admit the challenge is very exciting, I find the sensations similar to those I experienced when I started off in ocean racing or during my first trips on M100 (the old Macif) in 2015.

What struck you the most during this first month of sailing?
Two things: the surface and shape of the appendages mean that the boat not only has the ability to fly fast enough, but when there is a seaway they work like being on shock absorbers. This ability of the foils, rudders and daggerboard to cushion the boat in difficult seas, even upwind, is quite impressive and very encouraging, because the sea remains the biggest blocker  for the performance of these boats today. The second point is aero, where we have worked a lot: we feel that when the boat is properly trimmed, whether longitudinally or laterally, it accelerates very hard, all the more upwind, as soon as we have very low apparent wind angles and very strong apparent wind forces. On the other hand, as soon as  we are wider reaching when we reach sufficiently strong heeling or trim angles (longitudinally), we immediately feel the brake and the loss in RM (righting moment, therefore power). This is a notable difference from M100. Suddenly, that implies a lot of requirements in terms of settings, the boat is probably less easy, you have to adjust the trim to go very quickly.

Talk to us about speed, can you give us some numbers?
We get up over 30 knots very quickly and between 35 and 40 quite easily, including in rough seas, while there are things that we don’t have fully operational on board. If we are talking about top speed, we must have made 44.9 knots in less than 15 knots of wind on flat seas. These are machines for creating fabulous speeds. But what is especially interesting is the ability of the boat to maintain good speed in a seaway which remains the objective of these boats.

Including upwind?
Upwind – and when we talk about upwind on an Ultim, we are obviously not at 35 degrees to the true wind, but rather at 55-60 – we easily manage to keep averages over 30 knots in 14-15 knots of wind, and to climb to 35-38 knots as soon as we drop the bow a little. We have already managed to go over 40 knots at 75-90 degrees to the wind, on M100, we had to really hang in there to do it. It’s a fairly new thing and it’s very interesting, because it opens up many possibilities from a tactical and strategic point of view.

“Tom has experience and fabulous skills for his age”

What is the program for the next sailings?
We will soon start again on a block of about a month until the beginning of October, with training sessions with Actual at the beginning of next week, a session at the Finistère offshore race centre which will allow us to sail with the other boats in our class. And we will also try to find difficult conditions to build miles and firm up on reliability issues, in order to tick as many boxes as possible before the Transat Jacques Vabre. We will continue to bring in people from outside to help us improve – I am thinking in particular of Jimmy Spithill, who as you will remember was on M100 before with me and who I have spoken with quite a bit since the start of the year.

Tell us some words about Tom Laperche: Did he find the measure of the boat fast enough considering that the whole Ultim world is new to him?
I’m not going to praise him too much and make him blush, but I find that he already has, for his age, some pretty great experiences and skills, but also an amazing ability to learn and adapt. . He immediately has the right moves, the right ideas and to have seen a lot of people sailing. And this is not that easy, because they are quite special boats. We have a good feeling between us and a confidence that has settled between us from the start. Tom really is someone who, despite his relative inexperience, will bring us a lot.

Bringing in Tom, is that some kind of succession planning?
Not directly, but with me I had the chance to learn a lot from sailors who were much more experienced than me, I am obviously thinking of Mich ‘(Desjoyeaux) and also Kito (de Pavant), Pascal (Bidégorry), Antoine Koch and others, so there is something important to me in that: I feel like I can give something back. I am happy and quite proud to be able to transmit and help younger sailors like Tom make advances. And of course it is not just one way traffic, it is not completely selfless either, I feel like I can learn from him too!

“Gitana will be the favourite on the Jacques Vabre”

Six years ago, at less than three months after Macif was launched, you won the Transat Jacques Vabre. Will that be the goal again for the 2021 edition?
We are not favourites, because we will not yet have all the setting and gears. And up against us are very reliable and well sorted boats and teams facing us. However, when I see the potential of the boat, I tell myself that if we can do the whole race without major technical problems, there is no reason why we should not be challenging to win. But one of the main objectives will be to progress. If we are lucky enough to arrive in Martinique we will undoubtedly be the boat that has made the most progress during the race.

If you are not a favorite, who will be?
From a very objective point of view, Gitana (the Maxi Edmond de Rothschild) is clearly the most reliable boat, it is well sorted and has done many miles and Franck (Cammas) and Charles (Caudrelier) know the settings well, they have really dominated the Fastnet, they’re a little ahead.

Finally, can you tell us about your company MerConcept, what are the current projects?
We launched the new Imoca 11th Hour Racing a few days ago, on which we participated on the design in collaboration with Guillaume Verdier, we feel that it has a very strong potential; Apivia, like Gitana in Ultim just crushed the competition in the Fastnet, Charlie (Dalin) and Paul (Meilhat) will clearly be among the favorites on the Jacques Vabre, they are a great crew on a boat which remains extremely efficient. Pierre (Quiroga) and the Figaro are projects that are a bit further away from our technical core business, knowing that they are not development boats, and so I am modest about our contribution, but I am nevertheless delighted to see it work so well on the Solitaire, Erwan (Le Draoulec) too. We are also very happy with the flying electric catamaran project which came to Concarneau at the end of July, we are in the final phase of assembly and integration of the systems, it should be launched in early December. Otherwise, we have started the construction of the new Imoca for Maxime Sorel, that is a sistership of Apivia. So it’s quite full on, busy, we are delighted to have all these challenges on our plate. For Tip & Shaft readers and sailing enthusiasts, it’s good news to see ocean racing doing so well, now we have to manage this significant increase in activity, we are recruiting a lot across the board all of the trades of our world and some are not so obvious.