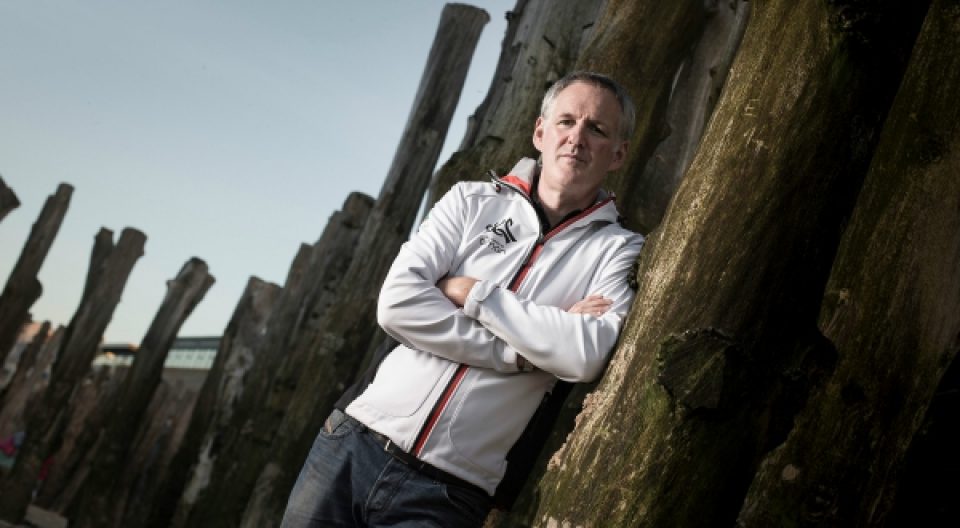 David Graham : “The target is to win the Tour Voile”

David Graham is the long standing CEO of the Oman Sail initiative. This year sees continued notable evolution as Sailing Arabia The Tour comes of age as a sustainable entity in its second year in the Diam 24. This year it attracted ten top quality teams and produced an excellent level of racing. And Franck Cammas and his company Joven have been brought on board to bring a new focus to the projects in France and Europe. Oman Sail have sailors training in the Beneteau Figaro 3 under the guidance of Cammas and his team, attempting to fast track them to be ready for La Solitaire this year. They will run two teams on the Tour Voile under Cammas and Stevie Morrison. And on the horizon there is the stated goal of trying to get an Omani flagged crew in to The Ocean Race, another good reason to have Cammas on board. Tip & Shaft caught up with David Graham at the end of Sailing Arabia The Tour.

So David, your thoughts on the Tour here?
Well, we lost a couple of days but that is sailing. The sea state was just a little bit too choppy. But other than that the racing was first class. We have put the event on to a sustainable platform now, one from which it can now grow from here. We are looking for an environmental partner for next year onwards. Financially we are sustainable now and from next year we want to be environmentally sustainable. That will be the development from next year but right now.  I am really happy that we have a product which I feel will grow and develop from here.

Last year at the same time you said you hoped for 15 teams at this year’s event and there are ten, are you a little disappointed. Is it difficult to attract teams?
Last year I was a bit ahead of myself. We changed the target to ten to 12 boats and we are happy with ten. Logistically it is not the most straightforward race and that is the biggest constraint. We are going to some pretty remote destinations. We will see what happens. Ten boats is sustainable and the race officer does now think we can handle more boats as does our logistics person. I am happy with the rate of growth. We had six, then ten teams. I am always ambitious with our targets but I am happy with ten boats.

Your objective was to make this race earn money rather than cost money, is that the case yet?
We have put the race on to a platform where it is not costing us anything and that is important to us because the media return is worth millions and it is going all around the world. And when you see the shots it looks such a great place to come. And so we are getting that return effectively for free now. Our aim is that it breaks even and does not cost money but we can spread the world that Oman is a great place to come on holiday, it is peaceful, the people are wonderful, you can have a great holiday.

Is it all working out as you wanted in terms of the net effect on tourist numbers?
Tourism is growing, and each area of tourism is growing. It is relatively easy to get to, overnight flights from Paris, from London, from Germany and Switzerland.

Why choose to bring in Franck Cammas?
A number of reasons. We are working with Franck’s company, we are doing our French business through his company. The second reason is his work ethic is very strong. He is an incredible sailor and when you have a leader with that kind of work ethic and talent then our Omani sailors are watching him and learning from the best. And of course he is Franck Cammas, that is the bonus. The media are attracted to him.

And what is the attraction of La Solitaire and the Figaro class?
The circuit is amazing and so many great offshore sailors have come through the Figaro circuit. Already our guys have had such great, very, very intense training with Franck and his guys. We talked about it before and nearly did it. But with the new boat and Franck coming in with the same amount of enthusiasm, we said: “let us just do it, let us get on with it, and here we are”.

The objective is to have one or two Omani sailors on La Solitaire du Figaro this year, is that still realistic?
Really I am not sure. I am not sure. If it is safe we will do it. And if it is not, we won’t. That will be the call for Franck and his team. We are not in a rush to do anything and that is like with the youth team in Oman, we do things properly in Oman and they are now doing very well, it has taken a long time, and it will be the same with the Figaro. If we can get there this year well and good but it will be there next year too, we won’t rush for the sake of it.

And what about your Olympic goals, will there be an Omani sailor or sailors in Tokyo?
There may be. But it is tough with the allocations, with the numbers coming down all the time, it is tough. It has become more difficult. We are still in with a chance with the 49er, they are working incredibly hard, we have a good coach and a couple of boats. So if we are in Tokyo well and good and if we are not, we are not but it will not be through a lack of effort. We said we would get into the Olympics within ten years of starting out and we may still, but that was quite an ambitious milestone from the start. We won’t beat ourselves up, we will learn from it and will see you in France in 2024.

What is your Tour Voile target?
We want to win it. We missed out on the podium last year. Ideally we would like to win it. That is the target. We would be happy with a podium but make no mistake we need to be going out there to win it. We have a lot of very, very strong teams ahead of us.

One of the things we are all talking about in France is of course The Ocean Race, what about it. Are you in?
There are more aspects to it now and we have Joven and Franck. Things have changed a lot in a year and there is much more clarity on what the race will be and in what boats and so we are very, very keen to be on the start line. We are looking for some commercial partners. But it is quite a difficult time in the middle east generally because the economy is reliant on oil and as you know the oil price has been depressed for a while, but we have to make a proposal which is compelling enough, which we have. So it is subject to funding, but we have the will to go ahead.

Did you talk with Richard Brisius and Johan Salen, the new owners of The Ocean Race? And would you expect to have a stopover in Oman?
Yes we have been in discussion. A stopover is a decision for the race, a strategic decision for them and it is a difficult decision because it is not exactly what the sailors want to come up to Oman. But commercially it is hard to ignore the middle east. You would have to ask the owners-organisers of the race.