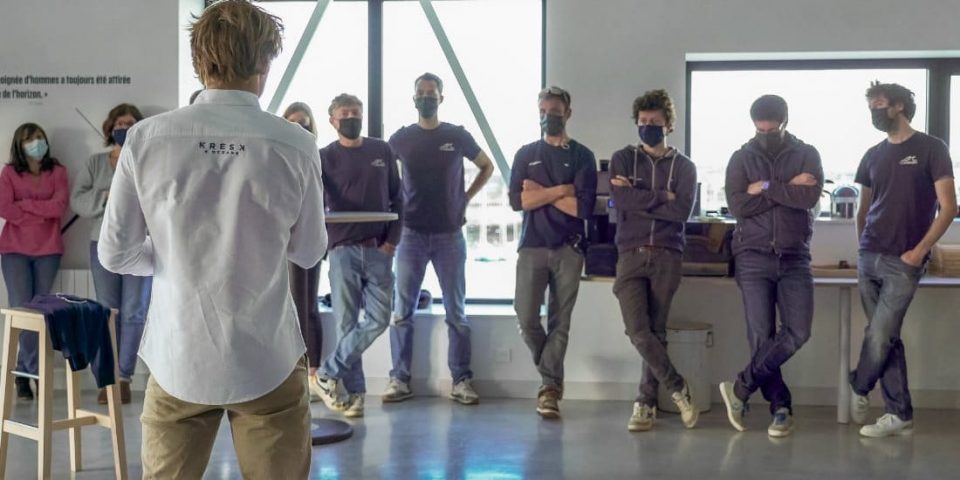 How the Kresk Group committed to support François Gabart

On May 27 the French Kresk cosmetics group, owned by Didier Tabary, announced their four-year commitment to support François Gabart and the purchase from Macif of the Ultim M101, which will carry the colours of the SVR, Lazartigue and Fillmed brands. Tip & Shaft tells us how this alliance came to pass in a very short time.

It was back on June 10, 2020 that Macif caused a significant stir announcing their withdrawal from the Ultim circuit on which the French insurance giants had been one of the main players since 2015. It was a body blow for François Gabart who had hoped to re-sign a contract with his historic sponsor on July 1, fully expecting to start a new cycle with the new boat, baptized M101 which he expected to launch in spring 2021. The winner of the Vendée Globe 2013 thus saw the most important project of his company, MerConcept, shudder to a halt.

“As soon as the bad news broke, we had to organize ourselves to try to find a successor to Macif, who had pledged to finance the construction of M101 until its completion. And of course it was more than ten years since we had needed to do this level of commercial prospecting, but we had nevertheless worked to build a kind of passive network, so the first thing was to rekindle this network,” explains François Gabart, supported here by Thomas Normand, Managing Director of MerConcept. “We were also asked a lot by independent agencies and individuals who offered their services to us to search and we opened a few doors thanks to some of them”.

The beginning of the search was not easy, as Thomas Normand recalls: “Macif’s announcement fell right in the middle of the Covid period, we quickly felt that the priority of the companies which we were talking to was not really focused on sponsorship, certainly at least in the first six months. But we also told ourselves that after each crisis, there were sometimes quite strong restarts, so we did not drop the energy we were putting into it.”

Two serious applications for the boat
A thousand emails were sent to prospects but in the end, according to François Gabart, “there were really several dozen companies which we spoke to.”  But very few contacts led the MerConcept team to really believe there might be a swift, positive outcome.
“In terms of appointments, we had five or six relatively serious leads,” says Thomas Normand. François Gabart adds: “We had advanced discussions with people who were extremely interested in the project, but more on co-partnerships, ready for example to contribute one or even two million euros, but not to underwrite the entire project. “On the Macif side, Jean-Bernard Le Boucher, former director of their nautical activity officially left the group on June 30 – reveals there were  “two serious applications came about the same time ”,  for the purchase of the VPLP design which is nearing completion, both around March time. “The first one was for a longer term, but our priority was to sell the boat before the build was finished, so that it could emerge from the yard resplendent with a new brand, that in itself could clinch a deal. “

The second one came from Didier Tabary, the owner of the Kresk cosmetics group. How did the proposal land on the desk of this 53-year-old Breton entrepreneur from Trébeurden? “The starting point is a story of passion for the sea and sailing. I was also lucky enough to be invited to sail Gitana a few years ago and to steer this boat at over 30 knots; That day, I felt a real emotion and I said to myself that if one day I could become the owner of an Ultim, I would. When I heard that François Gabart was looking for a new owner for his boat, I contacted Macif first, then François.”

“At worst, even if everything collapsed,
the boat would be blue”
Contact with the Macif was made at the beginning of March and then Didier Tabary approached MerConcept. “We felt quite quickly that we were in phase with each other,” explains Thomas Normand, “It was the first time that we had a such level of discussions and we said to ourselves that we could get across the line with this.”The first physical meeting between Didier Tabary and François Gabart takes place in mid-April and it convinces the founder of Kresk even more: “François is one of the most talented sailors of his generation but he is also an entrepreneur. Speaking with him, I realized that we had a lot in common and the same vision of societal and environmental issues. The choice of François as skipper and ambassador of our brands is a natural.”

These first contacts are so positive that MerConcept decided to take a punt with the branding of M101! “Originally, we had imagined a colourway with a fairly neutral paint that it could possibly accommodate a partner at the last minute as the painting was to begin in the second half of April,” says François Gabart. “ n light of the fact our first discussions were advancing very well, we decided to go for the blue that Didier’s teams like telling ourselves that, at worst, even if everything collapsed, the boat would be blue and that it could always be adapted to another party.”

“This project interested us because
it was almost turn key immediately”
It was a good choice. At the end of April, Gabart met the fifteen people who drive all the brands of the group and from there it took less than three weeks to seal the contract between MerConcept and Didier Tabary. The first paint job started the next week! Suffice to say that things went very quickly for a partnership of this scope.“When we saw reception we got internally for this project, it made us want to see it through quickly,” explains Didier Tabary. “It is in our corporate DNA that speed and agility are qualities that we press for. We also wanted the boat to have our colours for its launch on July 22 in Concarneau, which meant signing the contracts quickly.”

His signature is one that elevates the Kresk group, who are new to sports sponsorship, directly into the “premier league” of the Ultim, without even passing through intermediate stages. Tabary  explains: “If we had not had the opportunity to acquire the Ultim, we would undoubtedly have asked ourselves about an Imoca, but this project interested us because it was almost turn key immediately, whereas for the construction of an Ultim that takes three years from the time you give the green light and the time it is launched. “

On the Macif side they also welcome the deal: “We are happy to have chosen this course of trusting François’ team to finish the build and not to have sold a boat still in build,” says Jean-Bernard Le Boucher, “We weren’t worried that we were not going to sell it we had more uncertainties about the timing. The big advantage of this solution is that the bill of sale will be signed on August 31 at the end of the tests, which is the best possible scenario.”

“This project is a real driver“
It is of course a scenario greeted with great relief by the MerConcept teams which following the withdrawal of Macif, had to be cut back – François Gabart mentions 5 job losses. “The wait was not easy to live with, and the more the weeks went by, the more difficult it got,” confirms the skipper. “With V&B [MerConcept are the prime contractor for the build of Apivia’s future sistership for Maxime Sorel, Editor’s note] and our foiling electric catamaran, we had projects that allowed us to have good visibility until Christmas now we are already reorganizing ourselves to take on a greater workload.”Thomas Normand says they are considering 5 to 7 recruitments adding: “This commitment over the next four years allows us to stabilize the team, to work more calmly, to continue to develop our other activities and to do research and development, this project is a real driver.”

What is the amount invested by the Kresk group, between the purchase of the foiling trimaran and the operating budget? When told of a sale price between 12 and 15 million euros, Jean-Bernard Le Boucher agrees that “it is in this range”, while Didier Tabary does not wish to give figures.

The entrepreneur prefers to highlight “the twenty or so people who work almost exclusively on this project” in MerConcept, the expected gains in profile for the SVR, Lazartigue and Fillmed brands, and the enthusiasm “generated inside the group by the project and the creation of the Kresk4Oceans Fund”, whose first project will be linked to the fight against plastic pollution.

And this is a key element in the eyes of François Gabart, who could not imagine starting out on a project with no aspect of environmental concerns. “Even before talking to Didier about it, I was working on these topics and thinking about the best way to organize and create a fund, but more looking to 2022 or 2023, this partnership has accelerated the process.”