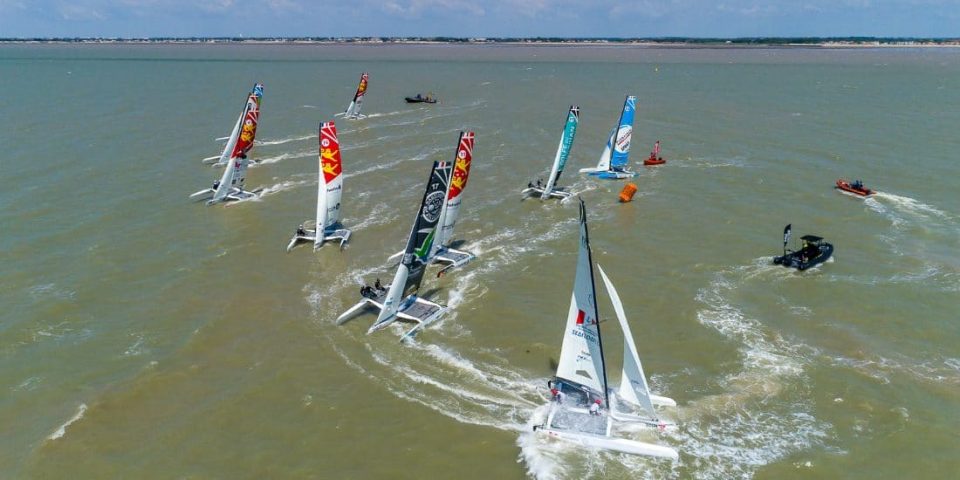 After taking over from ASO last year, the organisers of the Tour Voile run in July 2021, Normandie Evénéments have elected not to go on in 2022 due to the ongoing lack of funding. Tip & Shaft take a closer look.

The Tour Voile is still going through difficult times. In November 2020, ASO, the actual owners of the Tour since 2012, gave up on the organisation of 2021 edition due to the lack of a “major partner to ensure the financial stability of the event”. They do however remain the owner of the property (see our article). After a call for proposals was launched by the Diam 24 od class, Normandie Evénements were chosen in March 2021 to produce the Tour. They did so with the support of the Normandy Sailing League, and so a Tour Voile 2021 was run which made some format changes, like the return of ‘offshore’ coastal stages and a Final that took the form of a match-race on the lake of Serre-Ponçon in the Alps.

When they debriefed after this 2021 edition with ASO in September, the organizers seemed intent on going on to run the next, 2022 edition, and that appeared to still be the case in November, as confirmed by Daniel Souben, member of the Diam 24 od class management committee, who comments: “Normandie Evénements organized a reception with teams and partners at the start of the Jacques Vabre and they were extremely motivated, there was no doubt in our minds that they were continuing.”

However a month later in the middle of the Paris Boat Show those in charge of the Tour’s organisation decided that they were not going to organize a second edition. So what is the reason for this seeming U turn?  “When we took over the Tour, we decided to assume the financial risk by seeing it as an investment, so we organized this 2021 edition without a title partner and we lost money, a little more than we expected, but the event was seemingly good for the regions and for the teams and participants, it was a good way to start.” explains Thibault Parent, director of the Tour Voile 2021to Tip & Shaft.

“But the reality is we can’t afford to do two editions of back to back with the same financial outcome. To continue, we needed a title partner and we looked but it was in vain. The context right now is complicated: with all the uncertainties that affect so many events, it seems companies have difficulty in committing themselves. And rather than running a compromised edition, we decided not to go ahead and do another one right now. This decision was very hard to take, because we had taken over the Tour with options for four years and really had a desire to develop it.”

Short time window to find a Plan B

When Tip & Shaft contacted ASO they said they were ‘disappointed’ with the decision of Normandie Evénements, as they were ranked as preferred to other buyers just one year earlier. The former organizer of the Tour Voile also said they were ready to listen and to facilitate any takeover offer, having no intention of a return to the Tour Voile organisation and to to sell the property of the event.

Also made aware of the withdrawal of Normandie Evenements, the French Sailing Federation is trying to rally some goodwill, as Marc Bouvet, member of the commission of offshore racing directors confides: “We are sad to learn the news because the Tour is an event that is so much a part of the heritage of French sailing, we are trying to see who might be the candidates to re-engage. If there is a little hope, we have to believe.”

But really the timing is too short according to most of the people we spoke to. “We are in a worse situation than last year, in the sense that, after the announcement of ASO, we had launched a dynamic revival of the Tour which had pushed various organizers to apply. Here we find ourselves back at the bottom of the wall”, says Daniel Souben.

Among the candidates a year ago was Christophe Boutet, founder of Aloha Attitude but his company has moved on and now manages in particular Eric Péron’s project in the Ocean Fifty. “I proposed a project that was much more accessible financially, with a 12-day format on a half-seafront, a mix between F1 and Dakar, with real rallies and bivouacs on the islands, recalls Boutet who is from Brest. “I think last year was too much for a new year and new organiser. What kills races today are the communication budgets and the villages which are not profitable .”

The founder of the class and manufacturer of the boats at the head of the ADH Inotec shipyard, Vianney Ancellin adds: “I’ve been saying for a long time that three weeks in July is much too long. We have a group which is mainly young people many of whom are students who need to work in the summer, they can’t make themselves available for such a long period.”

UNCL were also interested in the options in 2021 and are still keeping a close eye on it, but really with a view to some years hence, particularly in the perspective of the future Class30 One Design, launched with the RORC and the Trysail Storm Club. “We are thinking about it,” confirms Yves Ginoux, vice-president of the UNCL. “Our project would be to make a Tour that is more concentrated in terms of time and locations with an international dimension. It could for example be one year in the Channel with stages in Belgium and England, the following year in the Mediterranean with legs to neighboring countries. It is up to us to build a project that will work, we would like to offer a demonstration event in 2023 because there will not yet be a fleet of sufficient Class30 ODs to organize an actual Tour.”

In Normandy, Cédric Chateau, sports director of the Normandy Elite Team who last year was quite involved in the organization of the Tour with the Normandy league, is considering an event that would allow the team’s five Diam 24s to sail (along with others), but obviously not under the name Tour Voile. “This decision by Normandy Events is a blow because the Tour has always been a training event for Normandy bred and based racers. We will try to set up an event between the North Sea and Normandy. The Tour last year pleased the communities who told us that their doors were not closed.”

“There is nothing left to offer”

So, unless the situation turns around, the Tour Voile will not take place in 2022 for the first time since its creation in 1978, other than for the pandemic affected 2020 edition that was canceled due to the health crisis. And this situation is not good for the teams. “As people were quite happy with the last edition, we were hoping for five or six additional teams to build the complement to fifteen. Now there is nothing left to propose“, sighs Daniel Souben.

The Team manager of Groupe Atlantic the winner of the 2021 edition, Pierre Mas adds: “I am sorry because the Tour is a great event and the Diam is a great class. We had convinced our partners to come back for this year, for 2022. Now in the end we are going to drop the project.“ That said he intends to keep his Diam 24 “if there is a good opportunity to sail it again”. But that is not the case for everyone: “For us, it is clear, we are putting the boat up for sale.” One owner tells us. “We are racers, we kept the boat for the Tour, we are not going to stay in the class just to do Spi Ouest-France and two or three regattas where there is not a very high level.”

Will we see the Diam 24, which was confirmed in September for three additional Tour Voile editions on the event again? Vianney Ancellin doubts it but puts it into perspective. “The Tour has been good for the boat’s profile but the Diam was never just built specifically for the event. The goal was to offer a fast and simple multihull allowing all those who have never exceeded 4-5 knots upwind and 15 knots downwind to discover real speed. Diam 24 life isn’t just the Tour, we’ve always done other things around the boat, we are going to work on a circuit that meets the objectives of the two types of Diam customers today: young people and (private) owners. And the boat is very popular abroad where it is not seen the same way. ” According to Vianney Ancellin of more than a hundred units built, around 65 are sailing outside of France. His thinking? “Today there is an economic problem with the Tour model and going back to run another will not solve it.”