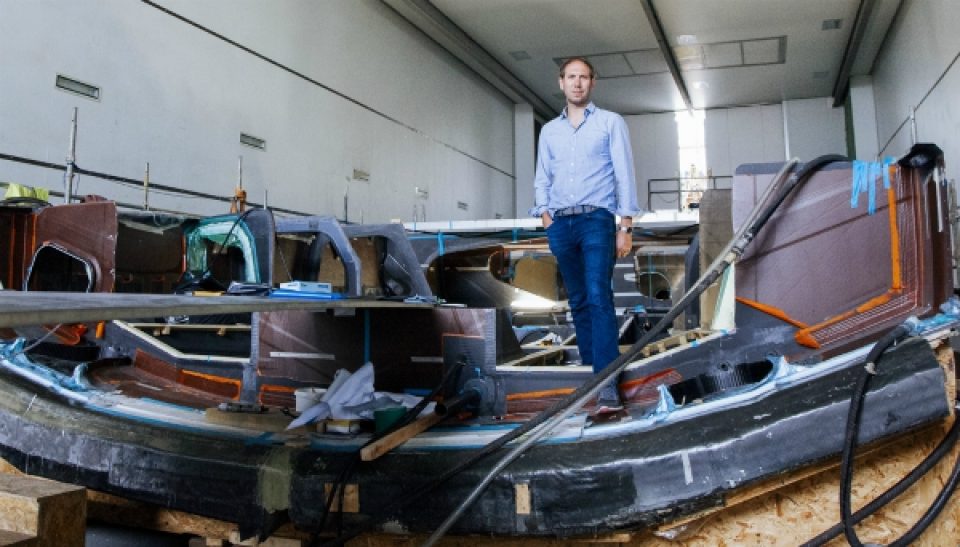 Stewart Hosford : ‘We come into this cycle to try and win The Vendée Globe”

Stewart Hosford is the CEO of Alex Thomson Racing Team. He steers the business leaving Thomson to focus on delivering the results on the race course and to the face of the truly global sponsorship programme which this summer saw the British skipper tour Canada and the USA. As part of this year’s pre-Route du Rhum-Destination Guadeloupe activation, Thomson says that he has completed more than 50 days of in store appearances, corporate appearances or sailing days this summer and more than 1000 guests have sailed on the foiling IMOCA 60 which took second in the last Vendée Globe.

What proportion of you budget does this year’s Canada and USA tour account for or what is the net value of it?
We do it twice every four years. When you have Hugo Boss out on the Hudson we get value. It is not just whether Alex is in the Wall Street Journal doing an interview or is featured on Bloomberg but there we have a three hundred square metre advertising billboard sailing up and down one of the most important cities on the planet. That is a separate number. If you take the US tour valuation together it is certainly worth a figure in the millions.

So Stew, the question everyone wants to know the answer to is what is the annual budget for the team or what do you bring in over four years?
We are always worried about giving away our budget. Our budget is a competitive number. When I know another team’s budget it is like knowing their foils’ angle of attack is, or what sails they are carrying. It is competitive number and it has a direct impact on how competitive a team is. It is secret. If you told me Charal had four million, or 5.5 million, pretty quickly I can work out what they will invest it in because we will be having the same discussions. So we won’t discuss a number.

Third in 2012-13, second in 2016-17, what was the learning from the last race which will contribute most to giving you the best chance of winning in 2020?
The biggest learning from the last Vendée Glone is that 2015 was devastating for us. We started the build late, we had problems with the moulds, we were late. Our intention was to be out for the Fastnet and we ended up coming out for the Transat Jacques Vabre. We were in Le Havre untested and nearly lost the boat. That set us back hugely. We spent six months putting the boat back together again to where it was before. That was a massive loss to us and a very valuable lesson. Had we not done that we probably would have been more comfortable with the foils, we could well have won the Vendée Globe. So we are on the right development cycle now but need the boat to come out when it is planned and we need to have done x thousands of miles before the TJV and before the Vendée. If we have not we are always going to be at risk. That is what happened on the last TJV we only got as far as Finisterre. We smashed the boats to pieces. Six months before the Vendée Globe we were still an untested platform and that is the key learning.

Here you are in Saint Malo seeing the new Charal up close for the first time, comparing it with what you will get and what it is, what do you think? Are you confident in your choices and will you be much quicker?
I wish I knew. We look at Charal with two perspectives. 1. Shit! That boat looks really fast and might kick our ass in the Route du Rhum, but 2. We are getting one next year and ours is a development on from Charal from VPLP and so how exciting. I look at it with two perspectives and the Vendée Globe is the most important and how our development of that boat will peform. If you listen to all the different views of Charal and there are plenty, it is fast in certain conditions, unbelievably fast and generating a huge amount of lift on these foils. We thought the foils on our boat in the last Vendée were huge but they are modest compared to Charal’s. We would expect it to be quicker than our (current) boat now, but whether he can bring it to bear is the question.

Tell us how and why Nokia came on board?
In the last Vendée cycle we think we were third or fourth in the budget tier of what was brought to the VG. We come into this cycle looking to have a winning team and winning boat to try and win the Vendee Globe. That is what we are about now. So we said what do we need to do that? We need ‘this’ team and ‘this’ budget. That is partly where we are getting Nokia on board. Hugo Boss have been exceptionally understanding. They said ‘let’s carve out some space on the boat and bring in another sponsor in order that you guys can be as competitive as you need to be.’ So that is how we get to the level that we can hire the right people that we want and we can go and be competitive.

And is participating in the Ocean Race, the former Volvo, part of the strategy for Hugo Boss and Nokia?
We have not had discussions with either of them other than ‘isn’t it exciting’. For us as a team we could not be in a more exciting place. Alex chose to get IMOCA sailing 14 or 15 years ago when it was an adjunct to the real pillars of the sport which were the America’s Cup and the Volvo and over ten years the Vendée Globe and the IMOCA class have inexorably risen with what we have done with foiling and everything has been a fantastic rise. The thought of going from being an IMOCA team to being a ‘Volvo’ team is super exciting. It is open right now. I am talking to a lot of different people about a lot of different things in that space right now. If we can put the right team together and the right funding together and the race is what we hope it will be, recognising the IMOCA part of our sport and allows us to compete in it in a good way, we would be excited to be involved.

So, knowing who you know and what you know right now, how many boats would you expect to take part?
I think it would be fantastic to see 15, an amazing target to have 15 boats at the start of The Ocean Race, some would not make it round that is part of the IMOCA culture, it is a learning curve for everyone. If an IMOCA team does the Ocean Race and breaks the mast on Leg 2 and does not have the budget to fly things on aeroplanes and put them on ships, then to have ten boats finish you need to have 14 or 15 on the start line. That should be our target to start the Ocean Race and of that 14 or 15 boats you get six or seven from the IMOCA side and six or seven from the Volvo side then you have a tremendous clash, a coming together of philosophies, cultures and experiences. There is a lot of goodwill around at the moment about this whole thing and I hope it comes together in a good way.

How do you want to see it evolve?
We are an IMOCA team and speaking as IMOCA team owner and director we want The Ocean Race to be as close as possible to an IMOCA race as possible. That is our starting point. Therefore we want as little cost as possible put on the IMOCA teams in order to encourage the IMOCA teams to take part. And the cost comes with going to a lot of places with a lot of inport activity, putting us under pressure with a lot of pre race activity which costs us money. Our request to the Ocean Race guys is to recognise the cost to the teams and make it simple the course as similar as possible to the Vendée Globe course as possible with some stops. If you can have six or seven stops, fantastic, eight or nine is too much.