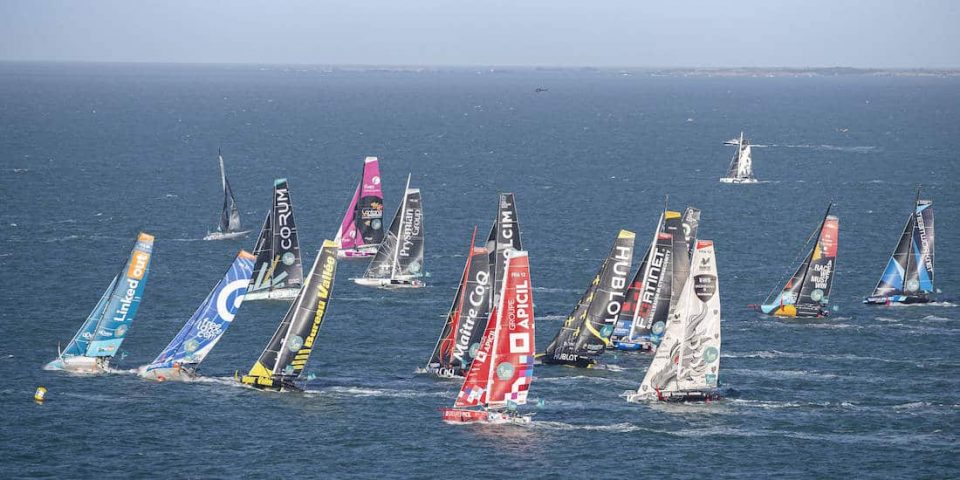 Vendée Globe: the situation concerning qualifying and the selection process

The second of the five solo qualifiers for the Vendée Globe, the Route du Rhum-Destination Guadeloupe enabled a certain number of sailors to take a step forward towards their qualification. What is the state of play today for the solo round the world contenders in relation to this important formality and the need to clock up miles? Which boats are still available? Tip & Shaft looks at the situation.

38 Imocas lined up at the start of the twelfth Route du Rhum – a record – ; 34 crossed the finish line in Pointe-à-Pitre and for most of them, this nearly meant their qualification for the 2024 Vendée Globe. The Notice of Race revealed just over a year ago, makes it a requirement for candidates to take part in at least two solo races aboard their Vendée Globe boat – “including one before the end of 2023 AND one in 2024”. They also need to finish at least one of these races and be ranked with a time that is not more than the winning time plus 50% (for example, if the first boat takes 10 days, they have to finish in less than 15 days).

The five races in question are the Vendée Arctique, raced last June, the Route du Rhum-Destination Guadeloupe, the Retour à la Base (the race back from the Transat Jacques Vabre in a year from now), the Transat CIC and the New York Vendée in May and June 2024. That means that sailors who have this year completed the Vendée Arctique or the Route du Rhum within the time limit and on their Vendée Globe boat merely have to start one of the two final races in 2024, without being required to finish the race, to complete their qualification.

Hardly any second-hand boats left on the market

Out of the 34 sailors who managed to cross the finish in Pointe-à-Pitre, 6 could not consider this to be a qualifying race. The first two, Charlie Dalin and Thomas Ruyant, and Eric Bellion, because they were not sailing aboard the Imoca boats they will have for the next Vendée Globe – they will be getting new boats in the first half of 2023 while François Guiffant’s boat, Kattan is not eligible for the Vendée Globe (as built before the 2004 Vendée Globe). But also Rodolphe Sepho and Nicolas Rouger, whose race times were longer than the winning time (Thomas Ruyant – 11 days, 17 hours and 36 minutes) plus 50%.

As for Fabrice Amedeo, who completed the Vendée Arctique within the time limit, he was unlucky to lose his Nexans-Art et Fenêtres after a fire in the Rhum, which means his qualification process starts all over again. “I am going to have to re-qualify aboard another boat. We’re working hard to find one,” he explained, pleased that his partners are continuing to support him in spite of the loss of his Imoca – which was insured – and because he is well placed in the number of miles clocked up (see below).

What are the options? They are limited. According to our information, only Rodolphe Sepho’s Owen Clarke designed boat from 2007 is for sale (we were unable to contact him), and the former Arkéa Paprec, aboard which Sébastien Simon took part in the last Vendée Globe. “The boat is still up for sale. She has had a complete refit, the paint has been removed and she is ready to sail within two weeks,” confirmed Romain Ménard, head of the Paprec Arkéa Sailing Team.

Thomas Ruyant’s current LinkedOut already has a new skipper, whose name is to be announced shortly for a project which will be run by the TR Racing team: “Advens 1 will be at the start of the next Vendée Globe. She has not been chartered or sold,” explained Thomas Gavériaux, MD of TR Racing. Hubert, Jean Le Cam’s boat aboard which Eric Bellion raced this season, “is currently being bought” by Violette Dorange’s team, according to her father, Arnaud, contacted by Tip & Shaft. There is some uncertainty about Malama, the 11th Hour Racing Team’s Verdier designed boat launched in August 2021. “We haven’t finalised any decisions on what the plans will be for the team or the boat after The Ocean Race,” the American team told us.

If he finds what he is looking for, Fabrice Amedeo will have to compete in the Retour à la Base in a year from now to qualify, even if he does not complete the race – he will then have a second chance in the Transat CIC and/or the New York Vendée. That is the case for all those who have not yet carried out a qualifying race aboard their Vendée Globe boat, particularly those who are getting a new Imoca, that is to say, Thomas Ruyant, Charlie Dalin, Yoann Richomme, Eric Bellion, Jean Le Cam and the future owner of the third Manuard designed boat being built at Black Pepper (after the current Bureau Vallée and Initiatives Cœur), to be launched next summer. “We began work on her last summer starting with a modification of the mould with a new geometry for the hull,” confirmed the head of the yard, Michel de Franssu, who does not wish to reveal the identity of the purchaser.

As for Jörg Riechers, he says that his construction project funded by Alva Yachts is still on the cards: “We got behind schedule, but it is due to start in February at Persico after Eric Bellion’s boat, so will be a commando operation.” What will the German do if his boat is not ready for the start of the Retour à la Base in November 2023, which would prevent him from qualifying? He has not excluded the possibility of requesting a waiver from the Notice of Race.

7 sailors are no longer concerned
by the selection process

Although a compulsory step on the way to the Vendée Globe, qualifying does not necessarily mean that everyone will be competing. If there are more than forty contenders, which is the maximum limit determined by the organiser for the 2024 race – applications need to be in by 2nd October 2023 -, the SAEM Vendée will have to sort them out by taking into account the number of miles sailed in the twelve Imoca Globe Series races listed from the 2021 Transat Jacques Vabre to the 2024 New York Vendée.

According to the Notice of Race, this selection process will not concern “the wild card open to the organising authority” – that many people believe will go to Clarisse Crémer – and the “first thirteen new boats to compete in a qualifying race.“ So far, the question of miles sailed does not concern Jérémie Beyou, Kevin Escoffier, Maxime Sorel, Paul Meilhat, Yannick Bestaven, Boris Herrmann and Sam Davies, who lined up at the start of the Route du Rhum aboard boats launched this year. There are six other places left in this list that can avoid the selection process out of a total of fifteen new boats (including Malama and Jörg Riechers’ one).

So that means 26 tickets will be issued based on the number of miles. Following the Route du Rhum, the Imoca class updated its table of miles sailed. A certain number can feel relaxed about this matter, in particular Giancarlo Pedote, Isabelle Joschke and Manu Cousin, who have taken part in all the races referred to. Others are likely to be more worried, like Louis Burton, currently 29th, Kojiro Shiraishi, 47th and Clarisse Crémer, who has not sailed any miles at all, and is not in the Imoca table.

It is not certain whether this rule will be applied, as it only comes into play when there are more than forty contenders, which at the moment is not certain, as several sailors have not yet found their entire budget. “Today, there are only three who have done all the miles after a year, which means there have been a number of twists and turns and it is not as straightforward as that,” explained the president of the Imoca class, Antoine Mermod, who when asked about the number of boats he expects to see at the start on 10th November 2024, replied: “I don’t think there will be 45, nor 35. Somewhere between 38 and 42 would seem to be a good number.”