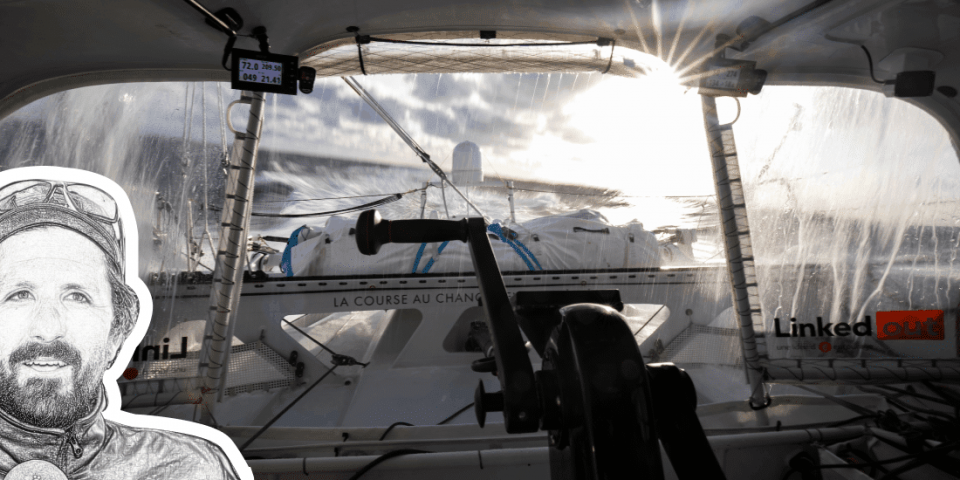 Yoann Richomme: “After the Horn, turn left or straight on?”

“Last time I was talking of the different possibilities of seeing big differences depending on the various courses in the Pacific. But the situation that I described to you totally changed: the high pressure which looked set to split the head of the fleet in two did not really have that effect and so the pack is still compact. In fact that has a lot to do with the fact the weather models can be in agreement for two or three days – as they were here – but beyond that timescale they start to disagree and in general become less reliable. It is not just a matter of 5 or 10 knots of difference in wind speed but the fact the weather system and the timings can be completely different.

Despite the weather changes Yannick Bestaven is still on top and we should highlight his general good management of the situation. It has not been easy and he has done well. He has a small speed deficit to Dalin which cost him about 40 miles at one point but it is inevitable as his boat is slower than Apivia. But this morning he has been quickest, over 21kts boatspeed for more than eight hours is going some.

Dalin did well too. He did not get trapped by the high as we worried for him. But he was prepared to risk and play with fire a bit but he managed to stay ahead of  the high as it chased him and then to get out of it cleanly and finally show some of the potential of a 2020 generation foiler clocking up a 500 mile day averaging 21 knots. He went about 200 miles of Bestaven who ran the ice barrier to benefit from the more favourable wind angle but will have to readjust his route to stay SE but some of that will depend greatly on the options they choose at The Horn. Thomas Ruyant has been caught by the group of pursuers and was quite offset from the pack to the north.

Damien Seguin is the skipper of the week

The sailor of the week is undeniably Damien Seguin who finds himself third because he managed to get ahead of the main body of the pack. He got out of the anticyclone well and so positioned himself best to be at the fastest angle and he pushed very hard, especially during the fast reaching phase. When he was in the middle of the pack a week ago, now he is 130 miles ahead of that part of the pack and ahead of Ruyant. He has been very impressive. The other big gainer this week is Armel Tripon who continues his comeback. I see him now passing Cape Horn 400 miles behind the main group and it looks like conditions will continue to be favourable for his 4×4. 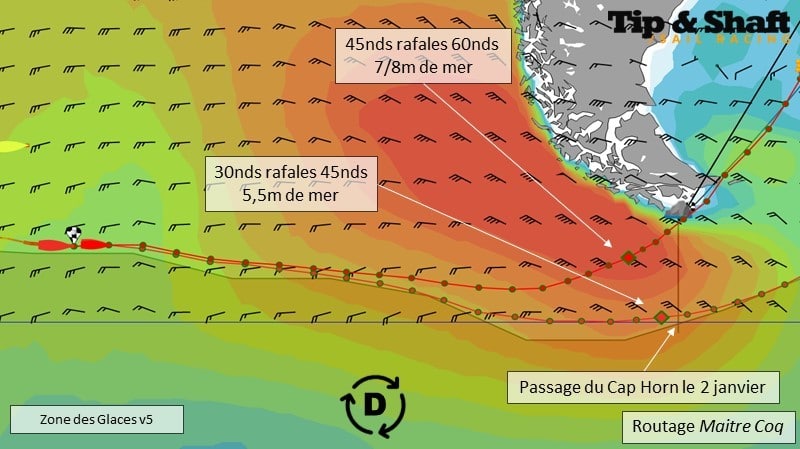 Between now and the Cape Horn, there is still a storm to deal with for both of the leaders with 45 knots of wind, gusts to 60, and 7 metre seas. It looks like it will mostly be in front of them, they will surely have to slow down a bit to not risk any damage.

The routings still give the passage of Cape Horn on Saturday January 2 in the afternoon for Yannick, and in the early hours of January 3 for Charlie, while the group of pursuers led for the moment by Damien should pass on on the 4th, in Maxime Sorel in the morning of the 5th  in the morning, Armel Tripon by day on the 5, Clarisse Crémer between the 5th and 6th, Romain Attanasio on the 6th during the day. Basically we could see ten boats within 48 hours at Cape Horn and 14 in 4 days. Impressive!

At the strategic level there are two options after Cape Horn for the  two leaders: either cut close to the rock and pass close to the Falklands, which is the “traditional” route (closest to direct course) or continue east along the ice zone very south (see sketch above).

In my opinion, there is an interest for them to stay offshore for two reasons: to avoid the rough conditions at the Horn (45-60 knots cross wind in 7-8 metre waves) and to get distance to the towards the east is in keeping with the final objective in the South Atlantic which is to get up to the trade winds north of the Saint Helena anticyclone (see sketch above). The advantage of the more direct route is that you are soon protected from the sea being closer to the coast.

For me, the two leaders have a real opportunity to put more distance on their chasers by riding the back of this big Horn system. The others should all stay pretty close of Cape Horn. And there is the temptation to be in close after having done so many miles without seeing land and for many this is their first Cape Horn!

As for the rest of it, well I think Apivia should prevail, its potential is greater on all points compared to Maître CoQ. But it does remain to be seen how Charlie will do with his port foil box problems. And they need to have the capacity and initiative to transition from Southern Ocean to full race mode for the climb north. The preservation mode can now give a little towards pushing harder in the early stages of the ascent.”