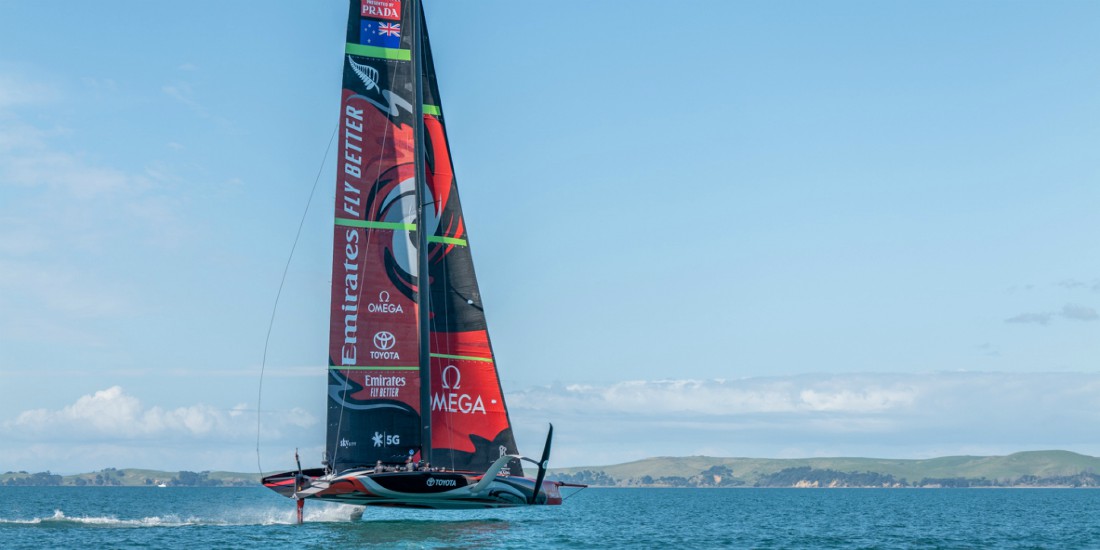 Guillaume Verdier: “The AC75 is a kind of strange boat, not very natural”

Guillaume Verdier’s work at the moment seems to span everything from the America’s Cup, where he continues to innovate as a key naval architect with Emirates Team New Zealand, to IMOCA where he has contributed foil design for Sam Davies and others, there are two freshly launched Vendée Globe boats for Thomas Ruyant and Charlie Dalin preparing to take on the upcoming Transat Jacques Vabre, Ultimes where he has just added some updates to Gitana 17. He is designing for two Ocean Race teams. Verdier’s passion and drive is undiminished. Tip & Shaft spoke to Guillaume just after the first flights of the ETNZ AC 75.

Having been instrumental in the concept of these flying monohulls these first flights must have been satisfying for you?
To be honest it is very difficult to talk about the new boat I am very restricted in what I can talk about, I can talk only in big generalities. The idea of this boat which we have just launched comes from a pre project that Ray Davies and myself worked on for a client for a 40 footer. That was during the last Cup. We started drawing a boat and I started off like an IMOCA (configuration). Ray told me it was not possible to have two foils and a keel. I said we could do two canting foils, so that we go from static stability to dynamic stability. That is the game we are playing, trying to find the fine line between some static stability and transitioning to dynamic stability, knowing we can control the flaps very quickly. So these past few days have been a real pleasure for the team. When we saw the Americans taking off it was a buzz for us too, it is such a new concept and having been only working on the simulator it was a very big risk. If we did not have the simulator we probably would not have risked it without going to a small test monohull.

Do you have any regrets that you did not have a scaled test boat?
It is hard to comment. We had no choice, it was a chosen decision. Remember, we were supposed to be going to Cagliari right away. That was the plan originally. So rather than going to Cagliari right away everything has been delayed. We had to be putting our boat on to a ship to go to Europe, it had to be built to that schedule.

Where does that leave you now in terms of scope to develop boat 2?
Clearly I cannot comment on that. We all work like crazy and we can’t give anything away. The truth is we don’t know what we don’t know. It is such a complex boat to first make things work, and then make sure it works like we think it should work. From there we will carry on. Like in an Open 60 when you finish the first one, someone comes along and asks you to design a second one, you keep on designing without stopping. There are many, many things on the table. You choose your options.

There are concerns these AC75s are going to be dangerous?
We have to be super careful. We don’t allow the guys to go forwards of the foil. You are not allowed to go forwards of the foil when sailing, that is in the rule. And when sailing there will be a virtual diamond so they don’t get too close to one another but of course it is always scary to see boats going fast, the same as with the AC50. Going at these speeds in big boats like this you need to be careful.

Could you foresee a trickle down, scaled down grand prix monohull boat come on the market? Something like a TP52 size with this foil system?
That was the intention to start with, it was a bit of a dream but you would not be able to sail the Sydney Hobart for example on a boat like this. Yes, maybe on an inshore grand prix circuit but I don’t see the public being able to have access to something like this, you would always be obliged to have fixed ballast that gives you stability. It is a kind of strange boat, not very natural.

How has it been coming into the IMOCA arena with new generation boats after being in the VPLP-Verdier collaboration? And where are we in terms of potential foil and hull development with these new boats.
I first started on the foil for Sam Davies, so that was the first work and then the second that came out was Charlie Dalin’s boat and now Thomas Ruyant. There is so much going on with the IMOCAs and a great diversity of ideas and designers I am very encouraged and excited. Charlie’s and Thomas boats are not so very different. They have different roofs and cockpits, they both rely on the hull shape to do well in the way that I believe that the hull shape is still an important factor on the Vendée Globe for the reason. The mast is the limiting factor in the IMOCA rule. It is a one design which can only sustain some given loads which were built into the design on the mast. So if you make a fantastic huge foil you still have to make sure you do not exceed the capacity of the mast. And the thing is on these boats going upwind, whatever foil it is you make, it will be hard to go upwind. If you make to make too big foils then to go upwind you will likely break the mast while reaching. The foils I designed are already quite big, I think probably the biggest but it is all about making sure we don’t damage the mast. To my opinion I still had to make a hull shape which was still capable to create some righting moment for upwind and to still be a good all round boat, good in the light, good in transitions it is always the same story. If you make a very, very radical boat for reaching then you are stuck for downwind.

What is your own view on the enclosed cockpit, racing indoors?
Of course it is interesting to see how everyone is now protecting the sailors very well, there are different options and more often now it is the client who is pushing in one direction or the other in terms of cockpit shape. I think, if I was my boat and it never is, I would like to be able to see forwards and have good visibility and feel the wind when you are steering, a bit like we did on Gitana, if you want you can have a good feeling for what is going on but at the same time you are well protected. I would not be too keen to be sailing in a cave, you know, but it is after all up to everyone.

So you did a lot of the hull studies for the Verdier IMOCAs as part of the Volvo Super 60 project which did not happen, how similar are these new boats to the Volvo designs?
Thomas boat is the hull for the Volvo we did quite a lot of work to do that hull and Charlie Dalin’s is slightly different, it is also an adaptation to the feeling of the sailor. And we did actually did some modifications for Thomas we re-shaped a little bit but too much. We had spent 1.5years, nearly two years on study before we started. I was very lucky to be able to do that time on the Super 60 with a lot of research time and a good scientific package with a lot of options on the table and then I could pick up some of these options for Thomas Ruyant and for Charlie Dalin. That was great, thanks to Nick Bice and the guys at Volvo that allowed me to do that.

Looking now to The Ocean Race, you have two projects, how different do you expect The Ocean Race boats to be generally?
It is a bit on the table at the moment, we have very experienced people, very experienced clients they will take a bit of what they think is good and bring that. So I think it will change quite a bit. We have built up some big design teams around them and there is a lot of interactions, it will be a very interesting design approach.

Do you see enough of a crossover with Vendée Globe boats moving on to The Ocean Race?
In my opinion it will still be fine to race in The Ocean Race with the IMOCAs. If you make some room in the cockpit, it would be a bit tight, it will be fine. For sure the foils over the next one and a half to two years will evolve a lot. So I don’t know what I don’t know yet but I am working on it to find out. Every day I draw new foils. It is likely it is not going to be the same, but the guy who has an Open 60 today will be able to buy the latest foils as a development to plug it on to his or her boat and go for The Ocean Race. I hope there will be some entries from the Vendée Globe to The Ocean Race, I think they do try to make it cheaper (than the Volvo).

Could you win it with a Vendée Globe 2020 entry?
The foil definitely allows the older hull shapes to perform well. It is so important, the foil and the sail plan.

So the courses are complementary in terms of what you design?
They still have not said what the final course will be. We don’t know if they go to Hong Kong and things like that but there seems to be a lot of downwind, you maybe go from Auckland to Cape Town, if they do that, it is very long one, and if they got Brazil to Sydney – not to Sydney but wherever they go in Australian that is huge as well, but probably a bit more downwind than last time.

But compared to the VG?
I think they are quite compatible.

Johan Salén: “Ocean racing has the qualities to emerge stronger from the crisis”
1 June 2020

Stewart Hosford: “Offshore sailing can show itself to be a leader and a differentiator”
28 May 2020