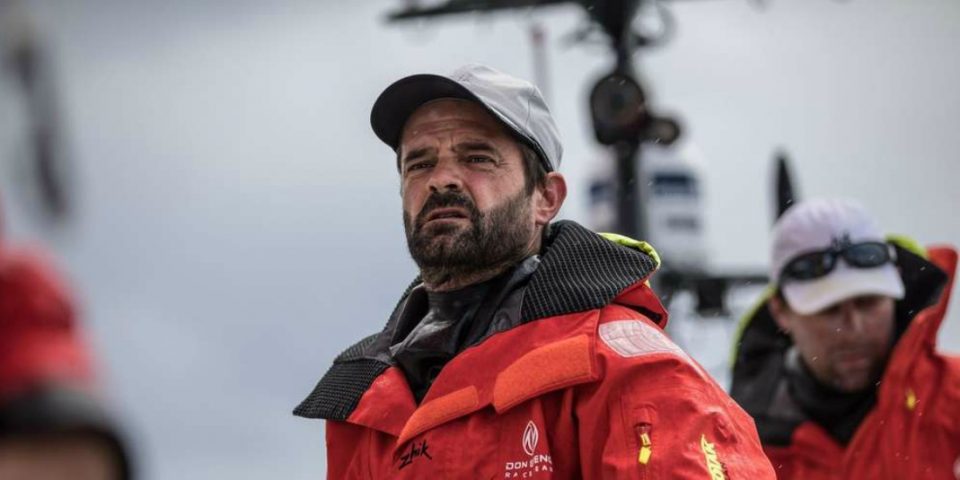 How did you get involved with Arthur Le Vaillant’s Figaro 3 project?
I have known him for years through his dad [Jean-Baptiste Le Vaillant, a long-time sailor from the Incidence loft, and a multihull crewmate of Pascal’s multihulls, Ed]. We live not far from each other by La Rochelle. I already worked with him last year on his preparation for the Route du Rhum with his Class40 helping with performance and weather. Now, as he needs a help for the Figaro 3, we are continuing to work together this season. I will be with him as we prepare for La Solitaire. And I spend quite a bit of time trying to learn and understand the boat and to work on the sails with Incidence.

Talk to us about the boat: you knew the Figaro 1 then the 2, how is this Figaro 3?
It is not bad. I think it’s going to be quite a demanding boat. At the moment, we are doing a lot of performance testing and runs and you realize that as soon as you lift your head for just a couple of seconds and let your focus wander then you are slowed compared to others. It needs constant concentration especially as the boat is fairly neutral on the helm. As soon as you do not have your eyes on the numbers, it quickly becomes complicated. Otherwise the hull is modern. But as for the foils the boat does not really fly. That said as soon as you reach a certain speed, you see that they work. We did tests with and without. And you go much slower without them. And having added a sail makes the game more complicated. You have to find the right crossovers between the gennaker, the heavy spinnaker and the big spinnaker.

Will the Figaro 3 be hard to sail solo?
Well it is a very stable hull and it has two rudders so it is pretty solid. But in terms of making it perform consistently, the sail choices, the courses and different choices and strategies, it will be interesting. And we have not had a Code Zero before. Upwind in ten knots of breeze you can crack off and make it work and go faster. So it is interesting. After fifteen years of the Figaro Bénéteau 2 when everyone finally was going at the same speed, using the same sails at the same times with the the same preparation it will all now be much more open. This Sardinha Cup will be quite similar to a La Solitaire in terms of the course durations except we are two up. There is still plenty we don’t know. We have not yet really mastered the gybes. And in terms of using the pilot, when you put on the pilot the boat slows, so that is going to make La Solitaire tough! I think there will be sections on some stages where you will just have to tough it out,  if you don’t you will lose heaps.

So why are you not on the circuit this season?
Well it is a bit frustrating now, but because I’m looking for money it would be complicated to do both at the same time. You can’t be everywhere and you need to focus on one thing. I know very well that to be successful in the Figaro you have to do it at 100% otherwise it just won’t work. But if in the end I have nothing to do next year, we’ll see. I’m not worried, I’m going to be doing enough sailing this year.

So you say you are looking for money, what’s the big idea, what’s the project?
I’m looking for money to do an Ultim, ideally to buy Macif. The idea would be to get it back in the water during the course of next year, so I could in the races during 2021. That will be a pivotal year when the first crewed round the world race in Ultim will happen [to be announced on April 2 when the Ultim 32/23 class itinerary is to be revealed, Editor’s note]. In particular after that you have the Route du Rhum in 2022. Then we have a solo round the world. For me they are still the most beautiful boats on the planet. When I got back from the Volvo I sailed with François. Macif made an incredible step: you are flying upwind, you are flying downwind.  I’m not saying it’s like that all the time, but this is one thing I want to invest myself in. I did a round the world in nine months on the Volvo and so it is cool to be able to do one in just 40 days.

How much are you looking for and is it a difficult project to sell?
I’m trying hard and most of all want to be viable, I’m looking for seven million euros ex tax over two years to do the whole programme including the round the world 2021. For that seven million, I’m including everything. And I don’t think it is any more complicated a project to sell than any other. What is complicated is just finding the money. Every time I’ve been offered money it’s been when I have not been looking. It is often a matter of the right opportunity at the right time. I have looked before and it did not work out for me but I hope this time it will be different, I have good people – friends – working with me and together we believe in the project.

You say that the class is not always on the edge but it suffered a big setback after the Route du Rhum, do you think it all developed too fast?
Perhaps. When we develop cutting edge boats we must accept they break from time to time. We work within the limits of what we have but we are not F1. I think there is a lot more to do in terms of the systems and the small bits and pieces but in terms of the structure of the boats, I am not worried. Groupama 3 and Banque Populaire V had repairs – on Banque Pop, we had problems in every area, the structure, the laminate, the hull bottom, delamination, but we never communicated about it because was forbidden. But over the last ten years the guys have gone around the world alone on these boats and they have come back with the boats in great nick. Now there is a Route du Rhum with one boat that capsizes and another loses its bow and it sounds like people are saying it’s the death knell for the class. But sailing on these boats solo is not easy. A few years ago you put 25 guys aboard because it was considered dangerous, now people maybe think it is easy, but there is a balance there.

Your main objective is to buy Macif, but you know about Sebastien Josse’s departure from Gitana. Your name is in the running as one of the skippers tipped to succeed him. Are you interested and have you been in contact with them?
Yes and yes, I’m answering your questions. But it annoys me a little bit discussing this subject because Jojo (Josse) is a guy I love and I would have liked his story with Gitana to go on. But to really answer your question I would not be saying no if Gitana offered me the job tomorrow. I have been saying loud and clear for a few years I want to do an Ultim. It is no scoop to say that they have met different people. We will see, the ball is in their court, and I’m fine with that.

Finally The Ocean Race. If your Ultim project does not succeed, would you be interested in going on The Ocean Race?
Clearly I am I’m focusing on the Ultim at the moment but if that doesn’t happen I would love to be on The Ocean Race. You can say it’s a long race and the boats have not moved on much whatever, but I’ve been on the last two and they were great. Each time I come back as a better person for it both as a human being and from a sporting perspective. So I would want to go again. I love getting up in the morning and being in a competition. I would like to go back to a foreign project for the mixture of cultures and to learn different things from people from different backgrounds.

Does the move into the Imoca excite you?
Yes, on the whole. With crews of five it’s going to be complicated. The Volvo is a crewed race, if you look back at history, there were 16 crew, then 13, 12, 8, and now 5, soon it will be two up! With five you race under pilot with two watches of two and that is not the same race. With eight and three people on the deck we worked hard.