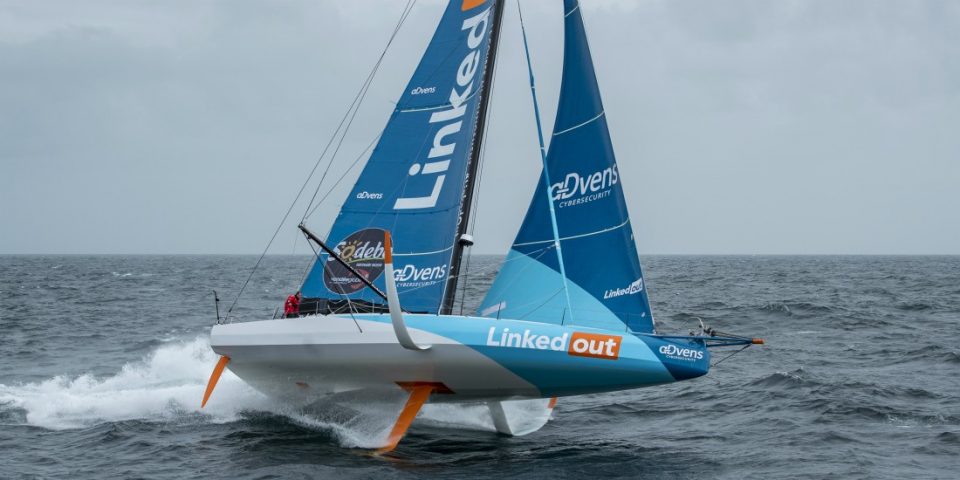 Antoine Koch: “I have fought hard to be able to mix designing with sailing”

At the age of 42, Antoine Koch has had a dual career as a sailor (Figaro circuit, skipper of the Orma trimaran Sopra Group, Multi50, MOD70…) and an engineer, which enabled him back at the start of the last decade to join Gitana Team, where he was put in charge of coordinating the design of the Maxi Edmond de Rothschild. Since 2018, he has been working alongside Thomas Ruyant on enhancing the amazing performance of the Verdier-designed Imoca LinkedOut, one of the favourites of the 2020 Vendée Globe. Tip & Shaft met up with him to find out more.

At what point did you really go from being a sailor to being an engineer in the design team?
At the time when the MOD70 circuit was collapsing. I was sailing then on Gitana, and we were looking at ways to improve the boat to allow Seb (Josse) to sail the 2014 Route du Rhum with a MOD 2.0. The team asked me to relaunch the Gitana Team design team and to carry out work with Guillaume Verdier. That was right in the middle of the 2013 Cup when we saw the pictures of the flying AC72s, so that was the road we went down from the start. Given the time frame, we didn’t think about getting the MOD flying in the Rhum, but we set things up to allow us to move a step up just after that. We quickly realised that making a flying Ultime was not out of the question and that convinced Gitana to dive in. It was in the team’s DNA to accept the risk associated with such an innovation and they understood we needed to head off in the direction of flying. One of the ways to reduce that risk was to use the MOD as a development platform, which made all the difference in comparison with the other projects. I have always fought hard to be able to mix sailing with designing.

You were put in charge of the overall coordination of the design of the Ultime alongside Guillaume Verdier. What was your priority?
I did a delivery trip across the Atlantic aboard Groupama 3. I loved the 4×4 aspect and the ease of sailing the boat and it was that sort of behaviour we wanted to get. One of the first specifications we laid down was the height out of the water. I am convinced that to sail a multihull quickly and in particular around the world, being higher out of the water is a safety factor and a basic element linked to performance. For me it was really bringing Groupama 3 up to date. We didn’t invent anything magical and simply moved with the times.

How do you feel about the Edmond de Rothschild maxi today?
V1 was well made and still has her foils designed four years ago, which is quite remarkable. She is ready to tackle the Jules Verne. She will be the first boat to attempt that in such an aggressive flying mode. The major uncertainty is how the systems will hold out after forty days of sailing at high speed with all the impacts and vibrations, which in the long term leads us into the unknown. It is going to be the same problem with the Vendée Globe.

“The choice of sails of LinkedOut is quite different from what we are used to seeing”
Moving onto that, what led you to join Thomas Ruyant’s team?
Seeing that most of the design work had been done with Gitana and that I wanted to continue down that road, I realised that it was time for me to look elsewhere. I gave a hand to Thomas and Boris Herrmann in helping them understand how Malizia, the former Gitana 16, behaved, as they prepared for the 2017 Jacques Vabre [in which they raced together, editor’s note]. I think that my way of doing things and the fact that I have sailed as well as designed pleased Thomas, who contacted me later when he was setting up his project.Were you involved in Guillaume’s choices when the boat was being designed?
I am of course always delighted to work with Guillaume, but I wanted to start out from a blank sheet, but that was not possible, as Guillaume had previously worked on the design of a Volvo 60, which was already ready and he had won over Thomas. I could see that it was a great hull, but it wasn’t necessarily the type of boat I was aiming for, so I didn’t get involved and focused instead on the mast and appendages.

What contribution did you make in that area?
You can see with the rigging and the choice of sails, which is quite different from what we are used to seeing. The first polars lead us to believe that her potential speed will be closer to a MOD70 than a traditional Imoca, so I am trying to get the sail plan to look more like a MOD70, with smaller surfaces and flatter sails. There is a lot to be said for separating the headsails from the mainsail as far as possible to open up a corridor between them and to offer greater latitude when trimming the mainsail. That offers huge gains in terms of aerodynamic efficiency and means you can have smaller sails which makes it easier for a solo sailor to carry out manoeuvres. The range of use can be wider because of the improved circulation. That was really something we worked on during the development. By having smaller surfaces, we managed to improve the use of the staysails. That is to say we can use a second or even third sail inside the gennakers, which means you can sail with the mainsail sheeted in. So you heel over a bit more, which means the foils work better. We had thought through the whole process from the outset. It’s a good example of the way I like to work.

“If Hugo Boss rounds Cape Horn 500 miles ahead of Thomas, it won’t be over”
You have just come up with V2 foils. Why? Are you pleased with them?
The V1 sails were good in that they didn’t create much drag and without worrying too much about them, you could reach decent average speeds, but they had their limits. They often lost their impact and the speed at which we took off was not good enough particularly in comparison with Charal which often came out on top last year. So, we wanted to reduce the problems of ventilation, improve her stability and take off earlier with bigger foils with a larger surface in the tip. After three weeks of sailing, we are really please with the V2 foils. The boat seems to be more stable and the foils don’t stop working as much, so are less demanding for the skipper. There are phases where we are much faster than with the V1 foils. When sailing at tighter angles than 100 degrees to the real wind, the boat is one of the best in the fleet, or maybe even the best. That doesn’t mean she is fastest all the time. It is more a compromise between speed, ease of handling and comfort. Having said that, for me the big problem is to do with the impacts: in terms of the structure, the boat has been considerably reinforced, but we don’t know how all the systems will behave with seventy days of banging and vibrations, remembering that they have come down from the previous generation of boats, which didn’t face the problem to this extent.Charlie Dalin told us last week that sailing down the Atlantic was the key moment in the Vendée Globe. Do you agree?
Yes and no. Statistically, it is and four years ago, Armel and Alex got that bit ahead when they reached the Southern Ocean and after that no one got within sight of them. But you have to understand that it is much easier in terms of the design work to improve the performance of an Imoca upwind and close reaching than downwind. The newer boats have made a lot of progress in those conditions. On Tuesday, we were at between 55 and 60 degrees to the wind in 26 knots of wind and were averaging between 18 and 21 knots, which is around eight knots faster than four years ago. The new boats are not all the same in this area, because some have worked on downwind sailing, leaving upwind sailing to one side – I am thinking in particular of Hugo Boss. Consequently, things will be very open on the climb back up the Atlantic. If Hugo Boss rounds Cape Horn 500 miles ahead of Thomas, who has a very good boat for the journey back up, it won’t be over, whereas in previous editions, if you had such a lead, it was looking very good.
Photo: Pierre Bouras / TR Racing