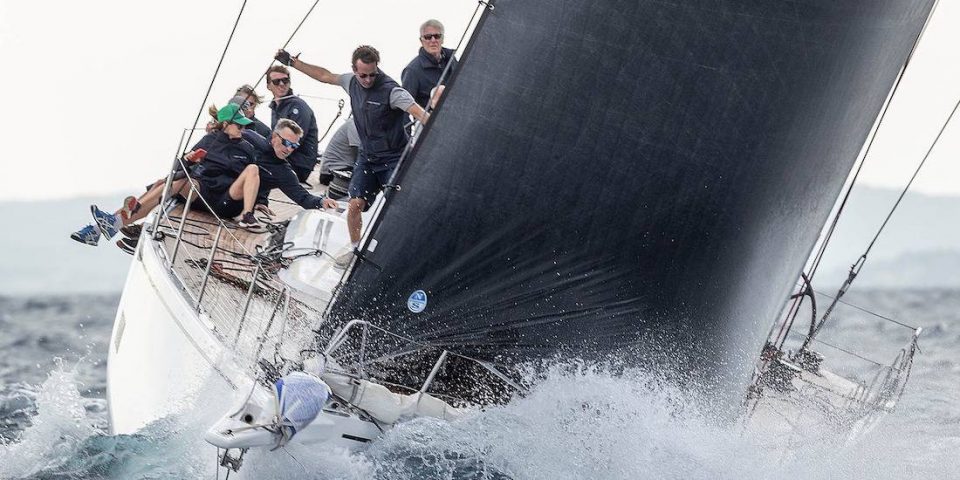 After competing in his first crewed Transatlantic Race in January aboard the Mylius 60 Lady First 3, Christopher Pratt is about to embark on the Rorc Caribbean 600, a race through the West Indies which starts on Monday with the same crew. It is a great opportunity to catch up with the bi-lingual skipper from Marseille who has English family…..

How did you find yourself involved in the Lady First project?
This story began five years ago thanks to Jean-Paul Mouren [a Marseille skipper who holds the record for participation in the Solitaire du Figaro with 28 challenges, editor’s note]. In fact I called him more than 20 years ago when I left my years 420 dinghy and I was looking to sail with him on his Figaro. He really taught me the basics of offshore and solo sailing. He called me back five years ago to suggest that I do the Middle Sea Race with Jean-Pierre Dréau who is the owner of Lady First. At the time it was a Grand Soleil 50 and Jean-Paul was managing the project. Jean-Pierre then bought Lady First 3, a Mylius 60, the project then changed a little in scope and he offered to take care of the sports management. That includes the choice of the races in which we participate, the logistics, the administration, the entries, the composition of the crew…. Knowing that it is a project almost 100% amateur complemented sometimes one or two pros on board; in general, we race with Xavier Macaire, Ronan Treussart and me. In fact it is rare all three of us are on board together except on this Caribbean 600. In all this gives me about forty days of pro sailing not including ‘office’ work.

Do you set sporting goals or is it really a leisure recreation project for the owner?
I suppose it is a bit of a hybrid operation, to the mix desired by the owner. First of all the boat is both beautiful and seaworthy and we have done more than 15,000 miles together so the mix is successful. And at the same time it is a boat that allows him to go on fun day trips with friends from Marseille or take part in events like the Voiles de Saint-Tropez. In the classes we race in there are of course 100% professional crews around us. But we are not in a cruising mode we strip out the boat and  we try to do the best possible on the races we do but we do so in a in a certain comfort and in a convivial, good-natured atmosphere. But it’s a super interesting project because it’s still a big boat that looks like an Imoca, even if it’s two and a half times as heavy, with the same sail areas. Personally, I love doing this. You meet good people.

“Another way
to approach sailing”

Might all this allow you to build a network of potential partners for your sports projects?
I’m good at getting along very well with all these people, but I’m not good as asking, some others are better than me! But there are plenty of sponsorship stories that have started out in this way. Corum is a good example, Nico (Troussel) sailed with the boss of Corum (Frédéric Puzin), they got on well and started out with a Class40 programme before switching to an Imoca. So yes, it can help, but I see it more as another activity, another way of approaching sailing. And we still do incredible races: there, we have just done a transatlantic race in January, we are continuing on the Caribbean 600, we may do the Middle Sea Race. This whole programme is quite brilliant. Yes, in France our races are great, but the Transat Jacques Vabre always starts from Le Havre, the Route du Rhum always from Saint-Malo, and there we see different things and another universe. On this Caribbean 600 I’m going to Antigua for the first time, a real sailing Mecca in the Caribbean, I can’t wait to discover all this. French owners who spend real money doing this type of racing can be counted on the fingers of one hand. This is much more of an Anglo-Saxon world. It is interesting to meet all these people, who we are not used to rubbing shoulders with at home. We exist in a big of French bubble as Figaro and Imoca sailors.

What does this represent for your MarSail company?
Today this type of sailing and project management as a whole represents about a third of the turnover including things like Lady First 3, my sailing on Charal or other boats and coaching. I mainly train people who do races like the Transquadra or the Cap Martinique and sometimes Figaro racers. I worked a little last year with Pierre Quiroga. The remaining two-thirds is the business part, we have been a certified training organization for three years, so we provide management training using sailing as an educational tool, as others do with horses, in the mountains and so on. It’s starting to get bigger, we had a very good year in 2021, we are now have a staff of seven almost full-time. Our ambition is to continue to develop this activity. We are aiming for around one million euros of turnover over the next three to four years, compared to 350,000-400,000 in 2021.

“I do not work
with Charal anymore”

Let’s focus on your own sailing and your year spent with Charal, what assessment did you draw from your Transat Jacques Vabre with Jérémie Beyou?
Well, now I’ve been third in this transatlantic for four times, so I’m really a bit fed up! But when you look at the nature of the race, we don’t have much to be ashamed of. We were a little slow in terms of speed and pure performance at times compared to the first two, however, we were almost on par with them throughout the race, with very small gaps. We were pretty good strategically, so it’s not a race that I end by telling myself that we missed out on something and that we could have won otherwise. We finished third because there is a generation of foils that the two boats ahead of us have and in flying conditions, we were clearly a step back, because we talk about a delta of 2-3 knots during a few classifications. In particular, at the start, Apivia was going 3 knots faster than everyone else upwind. We could not do much else other than just watch!

What’s next for you with Charal?
Well the adventure finished after the Transat Jacques Vabre. It was a great adventure, but like all great stories, it has an end. My objective now is the same as it has always been: to find a partner of my own to build something long term and to be at the start of all the biggest offshore races. With my team, we are looking to the future, in particular the Vendée Globe 2024. It’s a race that still attracts me enormously. The upcoming edition promises to be particularly attractive with a lot of new boats and incredible skippers who will take part, I not only want to be there but to be there with a project capable of winning. So we are in the process of finalizing our financing to have a competitive boat at the start. I hope to be able to say more in the coming weeks. And whatever happens, I’ll be on the water offshore, there are lots of great things to do: an Ocean Race coming up in less than a year, Ultim and Ocean Fifty races, a round the world in Class40…

Ouest-France published a hypothesis that Charal 1 will be sailed by another skipper than you, can you confirm?
I cannot comment on this subject, I am sure that Charal will do so in due course. As I said for me, the adventure ended after the Transat Jacques Vabre, I spent three incredible years with the team on this boat and I have great memories of it.